Nancy Pelosi claims 'everything is at stake' in 2020 election

Democrats are trying to position themselves as the party of change ahead of the 2020 presidential election, says Fox News contributor Karl Rove, former deputy White House chief of staff.

House Speaker Nancy Pelosi has unequivocally stated her opposition to launching impeachment proceedings against President Trump, calling it “divisive” and “just not worth it."

But the top House Democrat is now facing mounting pressure from those inside her party who say Special Counsel Robert Mueller’s newly released report lays the groundwork in Congress for impeachment proceedings. Things could come to a head late Monday afternoon, when Pelosi is set to hold a conference call with House Democrats to discuss Mueller’s findings.

In a letter to Democratic colleagues on Monday, Pelosi acknowledged the split in the party.

“While our views range from proceeding to investigate the findings of the Mueller report or proceeding directly to impeachment, we all firmly agree that we should proceed down a path of finding the truth,” Pelosi said. “It is also important to know that the facts regarding holding the president accountable can be gained outside of impeachment hearings.”

Pelosi, in her letter, called for being able to read the “full Mueller Report” without redactions so Congress “can make our decision on how to proceed.”

Pelosi’s top lieutenants in the House appear to be straddling the fence, saying during appearances on Sunday news shows they aren’t there yet on impeachment -- but not ruling it out. 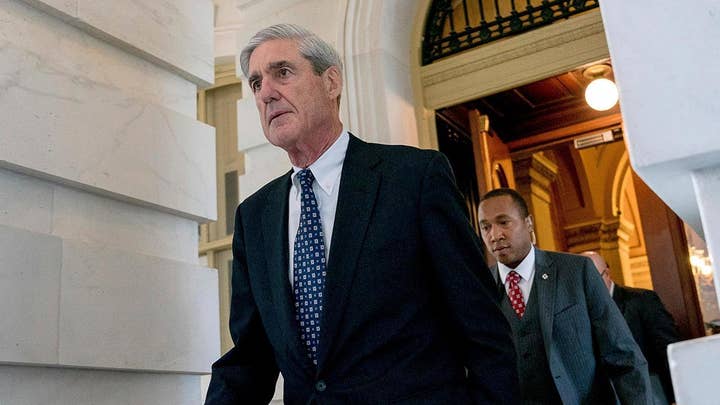 “I'm not there yet, but I can foresee that possibly coming,” House Oversight Committee Chairman Elijah Cummings said on CBS’ “Face the Nation.”

“I think it's a very difficult decision and we're going to have a caucus about this over the next couple weeks to try to figure out what the best course is, not for the party, but what's the best course for the country,” California Rep. Adam Schiff, the chairman of the House Intelligence Committee, said on “Fox News Sunday.”

“Obstruction of justice, if proven, would be impeachable,” New York Rep. Jerry Nadler, the chairman of the House Judiciary Committee, said on NBC’s “Meet the Press,” adding his committee will “see where the facts lead us.”

The sprawling and detailed Mueller report released Thursday, while effectively clearing the president and his associates on the Russia collusion charge central to the probe, outlined a series of Trump actions that were investigated as part of the obstruction-of-justice inquiry.

Mueller did not reach a determination on that issue, but provided a cornucopia of dramatic anecdotes showing the president trying to curtail the special counsel investigation. Among other things, the report said Trump told then-White House Counsel Don McGahn in June 2017 to tell the acting attorney general that Mueller “must be removed.” McGahn refused.

Republicans have dismissed the calls for impeachment.

“Only high crimes and misdemeanors can lead to impeachment,” Trump tweeted Monday. “There were no crimes by me (No Collusion, No Obstruction), so you can’t impeach. It was the Democrats that committed the crimes, not your Republican President! Tables are finally turning on the Witch Hunt!”

During an appearance Monday at the White House’s Easter Egg Roll, Trump was asked if he’s worried about impeachment. He replied: “Not even a little bit.”

It takes a majority of House members to pass an article of impeachment. Even if the Democratic-led House were to pass impeachment articles, the GOP-controlled Senate would then vote to acquit or convict, with the latter requiring a two-thirds majority.