Former Trump campaign chairman Paul Manafort on Thursday was sentenced to 47 months in prison after a federal jury in Virginia convicted him on eight counts of bank and tax fraud last year.

Manafort’s conviction in August made him the first campaign associate of President Trump found guilty by a jury as part of Special Counsel Robert Mueller’s probe. U.S. District Judge T.S. Ellis emphasized ahead of sentencing that the Manafort case was not about Russian interference in the 2016 election.

Ellis said that the guidelines of sentencing Manafort to between 19 and 24 years in prison were "excessive for this case." Manafort will receive credit for the nine months he's already served. Manafort was also hit with a $50,000 fine.

Manafort, who has been dealing with health issues, looked unwell as he entered the courtroom in a wheelchair. He told Ellis the last two years have been the most difficult he and his family have ever experienced and appeared to choke up a bit as he told the judge he appreciated the way the trial was conducted.

Prosecutors said Manafort, 69, hid income earned from political work overseas from the IRS while fraudulently obtaining millions in bank loans. Manafort had pleaded not guilty to all 18 counts in the case.

Manafort, who has been dealing with health issues, sits in his wheelchair in the courtroom. (William Hennessy Jr./CourtroomArt.com)

"I was surprised I did not hear you express regret," Ellis told Manafort during the sentencing Thursday night. He added that he believes "the importance of this case is to serve as a beacon to warn others."

After he heard his sentence, Manafort looked red-faced and emotional, while his wife appeared stone-faced. Manafort's lawyers appeared to be happy with the sentence, but a source close to the team said they remain concerned about his sentencing next week.

He is still facing additional years in prison from another case: After his conviction in Virginia, Manafort pleaded guilty in Washington to foreign lobbying violations and witness tampering as part of a plea deal with prosecutors. He has not yet been sentenced in that case, and Mueller’s team recently asked a federal judge to sentence him to 24 years in prison and order him to pay as much as a $24 million fine. 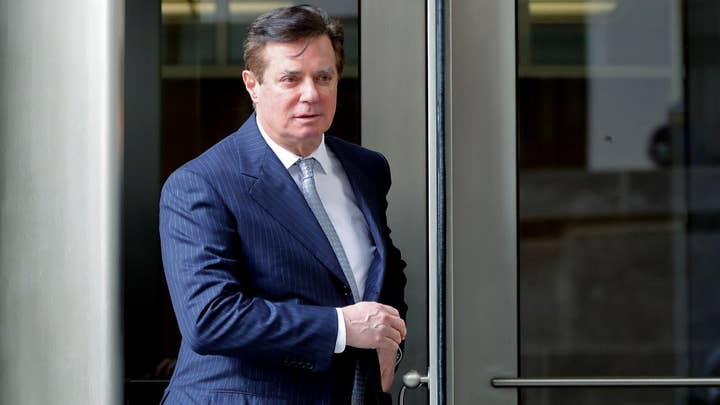 But his hopes for a reduced sentence in the Washington case may be in jeopardy after a federal judge recently found that he lied to Mueller’s team in response to some, but not all, of their inquiries. The ruling voids his plea deal and exposes Manafort, at a minimum, to a harsher sentence.

There’s been speculation that the president, who has expressed sympathy for Manafort, could pardon his former campaign chairman. “I feel very badly for Paul Manafort,” Trump said in August.

Defense attorneys for Manafort have suggested that Mueller’s team had improperly ensnared their client in its probe, as the case did not have anything to do with Russia’s interference in the 2016 election.

The prosecution’s star witness, Rick Gates — Manafort’s former business partner who struck a plea deal to cooperate with the government — testified during the trial that he and Manafort committed bank and tax fraud together.