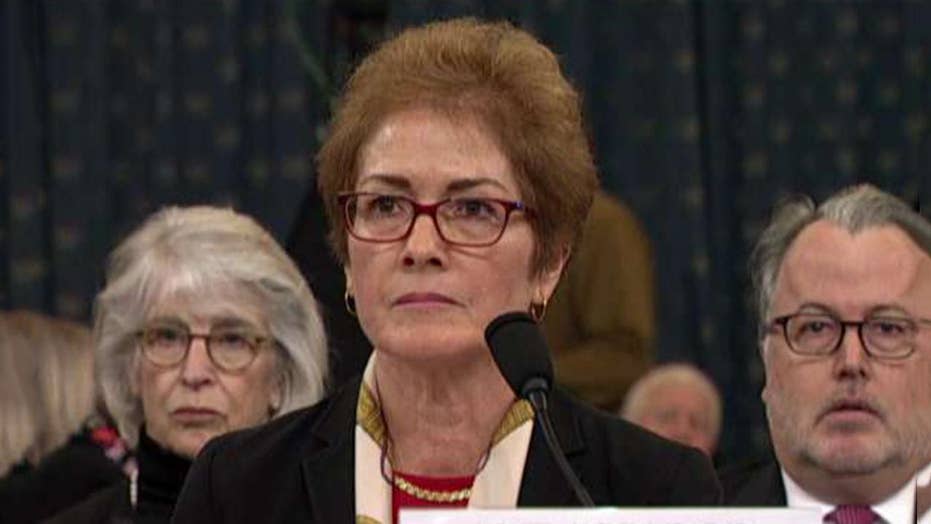 Former U.S. Amb. to the Ukraine Marie Yovanovitch is questioned by the Republican counsel on the second day of public impeachment hearings.

Former U.S. ambassador to Ukraine Marie Yovanovitch was repeatedly questioned during Friday's public impeachment hearing over allegations that Ukraine meddled in the 2016 presidential election in opposition to President Trump.

The questioning drew a rare response from Alexandra Chalupa, the former Democratic National Committee consultant whose work has been cited by Republican lawmakers as evidence of Ukraine's election interference.

Republican counsel Steve Castor asked Yovanovitch about reports that, during the race, Chalupa had meetings with officials at the Ukrainian embassy in Washington to discuss incriminating information about people associated with the Trump campaign.

Yovanovitch said she did not believe she knew Chalupa. Further, when asked if she tried to investigate those interactions, she maintained this would have been handled in the U.S. since the meetings took place in Washington, not in Ukraine.

Yovanovitch was also asked about the "black ledger" documents from Ukraine that were eventually released and were damaging to former Trump campaign chairman Paul Manafort, and still maintained that such developments did not appear to be targeted at then-candidate Trump.

“I don’t have any information to suggest it was targeting President Trump,” she said, later adding that “at the end of the day, President Trump won the election.”

The back-and-forth seemed to draw in Chalupa, who tweeted a defense of her work and involvement at the Ukrainian Embassy in D.C.

“For the record: I have never worked for a foreign government. I have never been to Ukraine. I was not an opposition researcher. In 2008, I knew Manafort worked for Putin’s interests in Ukraine. I reported my concerns about him to the NSC in 2014 & sounded the alarm bells in 2016,” Chalupa tweeted Friday.

Chalupa was brought back into the spotlight when House Intelligence Committee Ranking Member Devin Nunes, R-Calif., and top Republicans involved in the impeachment inquiry proposed that she appear as a witness in the public phase of the investigation.

“Given President Trump’s documented belief that the Ukrainian government meddled in the 2016 election to oppose his candidacy, which forms the basis for a reasonable desire for Ukraine to investigate the circumstances surrounding the election and any potential Ukrainian involvement, Ms. Chalupa is a prime fact witness who can assist Congress and the American public in better understanding the facts and circumstances surrounding Ukrainian involvement in the 2016 election,” Nunes wrote over the weekend when proposing Chalupa as a witness.

Chalupa first entered the conversation in January 2017, after Politico published a report exposing her as a DNC operative. She once worked in the Clinton White House and, during the 2016 campaign, met with officials in the Ukrainian Embassy in an effort to expose ties between former Trump campaign chairman Paul Manafort and Russia. 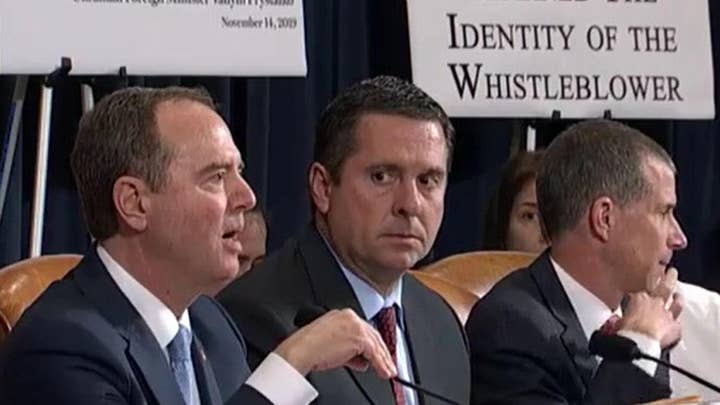 It is highly unlikely Intelligence Committee Chairman Adam Schiff, D-Calif., and Democrats on the panel will approve Republicans’ request to have Chalupa appear as a witness. Schiff and Democrats, as per a newly passed resolution governing the impeachment inquiry, have the final stamp of approval as to who can testify as part of the formal inquiry.

On the call, Trump pressed Zelensky to open an investigation into Ukrainian election meddling in the 2016 presidential race (related to an allegation separate from the Chalupa meeting) and into former Vice President Joe Biden and his son Hunter Biden’s business dealings in Ukraine.

Zelensky, though, has said he felt no pressure during the call. The White House has maintained no wrongdoing, and the president has repeatedly said the call was “perfect,” arguing that it contained “no quid pro quo.” The plot thickened when diplomat Bill Taylor testified Wednesday that a staffer overheard a phone call where Trump discussed such "investigations" on July 26, the day after his controversial phone call.