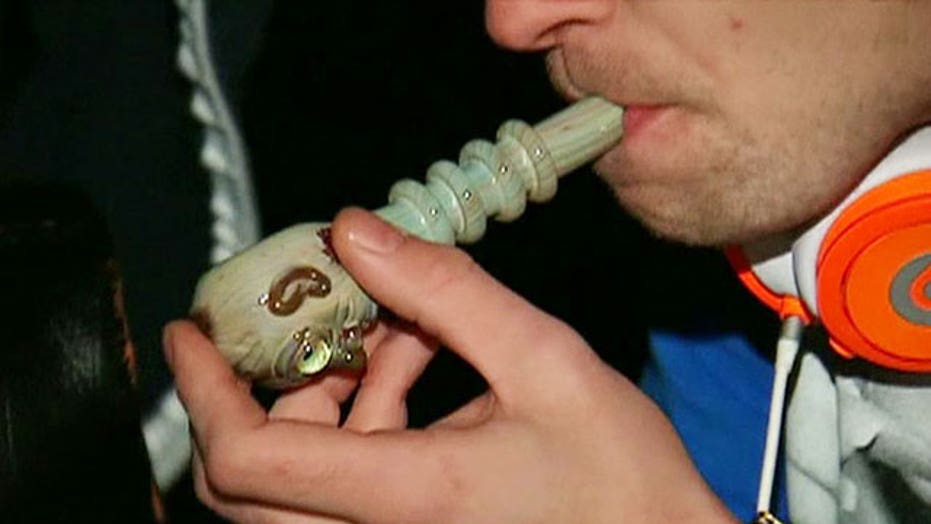 Twenty months after voters legalized recreational marijuana, the first pot stores are licensed and selling the drug. And business was already booming.

Amber McGowan, a manager at Cannabis City in Seattle, said she’s expecting to sell all 10 pounds in the store this first historic day.

“There’s definitely a market out there that would rather go the safe route, because a lot of people don’t like going to their dealer,” McGowan said. “The dealer is usually pretty shady.”

Washington state follows Colorado, which was the first to open pot retail stores on Jan. 1. Voters in both states legalized possession of up to an once of marijuana for recreational use in November 2012. Colorado was able to approve sales earlier because it licensed only medical marijuana shops that were already tightly regulated. Washington’s medical marijuana industry operates with very little government oversight.

Not everyone is celebrating. Dr. Leslie Walker, who practices at Seattle Children’s Hospital, sees negative consequences for society and especially young people.

“It’s the kids who will have short-term memory problems, kids who aren’t going to be able to get up in the morning to go to school,” Walker said.

Since pot became legal for adults in 2012, police have seen an increase in people smoking and driving. In the years leading up to legalization, the percentage of impaired drivers who had been high on marijuana held steady at 28 percent. Since then, 40 percent of impaired drivers tested positive for pot.

Hospitals also have seen an increase in adults seeking treatment after eating food laced with marijuana.

Because the edibles today have a much higher THC level than what was consumed in the 1960’s, Amber McGowan has a warning for her customers.

“If you’re not a regular user, take it in moderation. One puff is probably plenty and steer clear of edibles until you get a tolerance for it,” McGowan said.

Buyers will be limited initially by a tight supply. Cannabis City will limit customers to packets containing just two grams on opening day. Most growers that have been licensed expect their first harvest in late summer. The small supply means high prices. Pot will sell for $25 per gram, about double the street price. Four or five joints will cost $50.

The marijuana is heavily taxed at every step in the process. The government collects a 25 percent tax when growers sell it to processors, when processors sell it to retail stores and when stores sell it to consumers. Forty percent of the tax revenue will go into the state’s general fund. The rest will pay for prevention and drug treatment programs.

Outside Cannabis City, which was opening its doors at high noon, it was a low-key celebration among those first in line.

Cal Jones has been smoking pot since 1965. “It’s a shame that people east of Colorado are still going to prison for it,” Jones said.

Other states may soon join Colorado and Washington’s lead. Voters in Alaska will vote on legalization in November. A ballot measure may also qualify in Oregon.