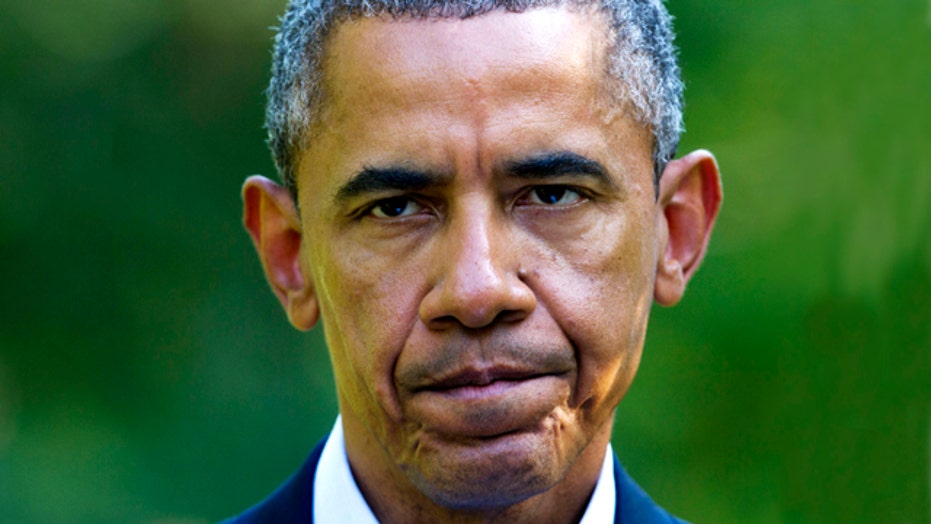 Obama shifts blame to Iraqi gov't for US troop absence

President Obama is coming under fire from critics for shifting the blame to Baghdad for the absence of American troops in Iraq.

Less than 48 hours after authorizing airstrikes against Islamist militants in Iraq, Obama rejected the assertion that he could have left a small peacekeeping force on the ground.

"What I just find interesting is the degree to which this issue keeps on coming up, as if this was my decision," Obama told reporters Saturday. "In order for us to maintain troops in Iraq, we needed the invitation of the Iraqi government and we needed assurances that our personnel would be immune from prosecution."

He was referring to the failure to strike a security agreement with the Iraqi government before U.S. troops pulled out.

But appearing on Fox News' "America's Newsroom" on Tuesday, National Journal senior political columnist and editorial director Ron Fournier criticized the president for "shifting the goalpost" on the absence of American troops in the region after the spread of Islamic militants became a more serious threat.

"I find it kind of disingenuous to say, first of all, 'It's not my decision,'" Fournier said. "You're the president of the United States, sir. It's your decision."

"Now he's trying to walk away from it because of what's happening over there."

While Fournier conceded that the nation's leaders "aren't perfect" and "can't see into the future," he called out the commander-in-chief for pointing the finger at Iraqi Prime Minister Nouri al-Maliki for blocking the stay of U.S. forces.

"The United States could have convinced al-Maliki to give us the authority we needed," Fournier said. "The president didn't want to have troops there."

"Be honest with us. Explain why it is, Mr. President, you decided not to keep troops there."

Fournier also said he wants to hear answers from the White House instead of blame as the terror threat continues to grow in the Middle East.

"What are you going to do now to make sure these killers, these jihadists, don't come and hit us here at home? That's what I want to know."