The former president expresses worry about progressives 'shooting at your allies because one of them has strayed from purity on the issues.' Meanwhile, Rep. Alexandria Ocasio-Cortez is challenging the DCCC for trying to shut down primary challenges from the far-left.

As the Democratic Party tacks increasingly left on immigration, some key figures are moving to reset the rhetoric in their own ranks -- with Sen. Bernie Sanders taking a stand against “open borders” policies and former President Barack Obama highlighting the importance of immigrants assimilating into their host nation’s culture.

"I worry sometimes when, as we think about how to deal with the immigration issue, we think that any moves towards assimilation of the existing newcomers to the existing culture is somehow a betrayal or a denial of people’s heritage or what have you,” Obama said at a town hall event in Berlin on Saturday, before arguing that "if you’re going to have a coherent, cohesive society then everybody has to have some agreed upon rules, and there’s gonna have to be some accommodations that everybody makes, and that includes the people who are newcomers."

While no top Democrat has explicitly argued against immigrants assimilating into U.S., Obama’s comments reflect an increasing wariness that progressives may be reflexively labeling mainstream views on immigration as racist -- as some 2020 Democrats embrace far-reaching positions such as extending Social Security for illegal immigrants and abolishing Immigration and Customs Enforcement (ICE). Obama also warned against creating a "circular firing squad" where progressives take aim at allies who have "strayed from purity on the issues."

Obama’s remarks come amid an escalating border crisis and as President Trump pushes to secure the border amid a surge of migrants seeking asylum. Democrats have opposed a number of Trump proposals, especially his call for a wall at the southern border as well as changes to make it harder to claim asylum.

2020 DEM JULIAN CASTRO CALLS FOR ILLEGAL IMMIGRATION TO BE TREATED AS CIVIL, NOR CRIMINAL OFFENSE

Democrats say they are in favor of border security, but they oppose Trump’s more hardline policies. However, some 2020 Democratic presidential hopefuls have mulled tearing down existing border fencing if they were elected, while 2020 hopeful Julian Castro recently called for illegal immigration to be treated as a civil, not a criminal, offense. 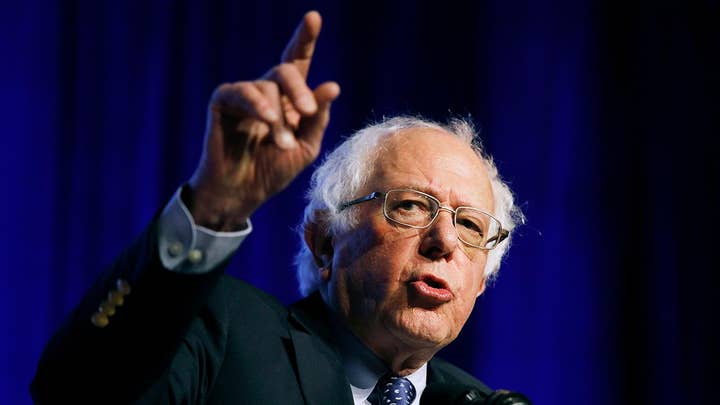 In response to the opposition from Democrats, Trump has called them “the party of open borders, drugs and crime” and appears set to carry that message into the 2020 campaign.

But Sen. Bernie Sanders, I-Vt., who is on the party’s left on most issues and is a front-runner in the 2020 presidential primary race, has rejected the “open borders” label, saying such a policy is grossly unrealistic.

"If you open the borders, there's a lot of poverty in this world, and you're going to have people from all over the world,” he said in response to a question in Oskaloosa, Iowa. “And I don't think that's something that we can do at this point. Can't do it."

Sanders did say that he is in favor of “comprehensive immigration reform,” versions of which generally involve a “path to citizenship” for people already in the country illegally.

It isn’t Sanders’ first rejection of “open borders” policies and could foreshadow a potential fight with other primary candidates if they push for such policies. In 2015, he made comments to Vox that, in 2019, may sound out of place for a democratic socialist.

“Open borders? That’s a Koch brothers proposal,” he said, referring to the conservative billionaire businessmen known for their political activism. “That’s a right-wing proposal which says essentially there is no United States.”

When the interviewer said it would make the global poor richer, Sanders responded sharply: “And it would make everyone in America poorer and you’re doing away with the concept of the nation state and I don't think there's any country in the world that believes in that.”