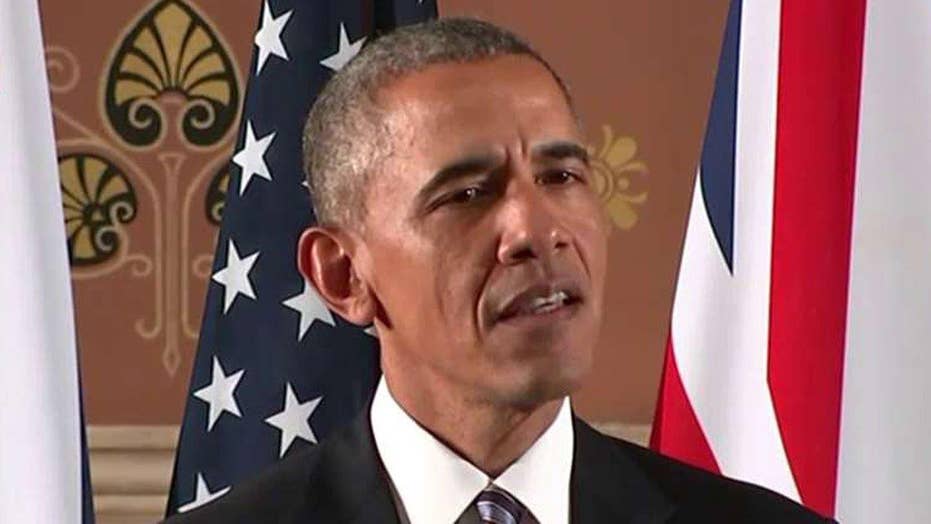 President Obama defends US interest in UK's decision on EU

“It would be a mistake for the United States, or Great Britain, to send in ground troops and overthrow the Assad regime,” he said in an interview with the BBC.

Obama said he didn’t think the Islamic State would be eradicated in his last nine months in office, but he still believes the territory that the terror group controls can shrink. Obama called the conflict a “heart-breaking situation of enormous complexity.”

“In order for us to solve the long-term problems in Syria, military solution along – and certainly us deploying ground troops – is not going to bring that about,” he said.

Obama told the BBC the U.S.-led coalition will continue its air campaign against ISIS and target key areas like Raqqa to try and “lockdown particular areas where the terror group can import foreign fighters into Europe.”

The president also took a shot at several countries that haven’t approved actions against the Islamic State in Syria, but “wanted the United States to do something about it.”

“You can’t have it both ways,” he added.

At least 250,000 people have died in the Syrian civil war over the last five years and millions have fled to Europe in hopes to escape the fighting. Obama said to fix the problem a “transnational” response to the issue will be needed.

Meanwhile, the collapse of a fragile truce brokered by the U.S. and Russia is feared to happen by Obama and the U.N. Syrian rebels have continued to accuse the government of breaking the truce.

Talks between the Syrian government and the opposition are expected to continue in Geneva next week.