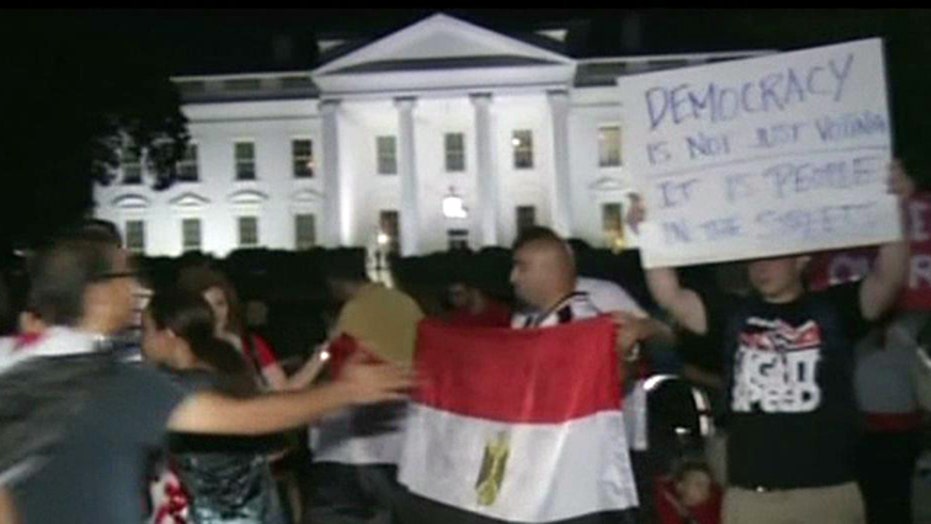 Will countries step up to offer aid to Egypt?

The Obama administration, facing pressure from lawmakers and world leaders alike over the rapid developments in Cairo, is taking a cautious approach as tensions mount in Egypt over the military overthrow of Mohammed Morsi.

After an interim president was sworn in, Egyptian security forces on Thursday arrested the leader of the Muslim Brotherhood. The move threatened to fuel further unrest, as Islamists began to organize for a demonstration on Friday.

The administration has not commented on the latest developments, or necessarily taken sides in the power struggle. Instead, officials are staking out a carefully worded stance, particularly when it comes to U.S. aid to Egypt. Late Wednesday, the administration ordered a review of U.S. aid but stopped short of calling the military overthrow a "coup."

That's almost certainly because calling the ouster a "coup" could have concrete legal consequences. Under the law, Washington is supposed to halt aid to any country where the democratically elected leader is toppled by a coup.

But the administration is loath to condemn Egypt's military institution, which the U.S. has built ties with for decades, particularly amid criticism from the right that President Obama was too supportive of Morsi. With Morsi gone, Republicans appear to be pressuring Obama to sustain the U.S. aid to Egypt's military. Some security analysts are describing the overthrow as a unique opportunity for the U.S. to have a second chance at shaping the future of a country that historically has been a major Middle East ally.

For now, the administration is calling on the military to "quickly and responsibly" return to a democratically elected civilian government while avoiding "arbitrary arrests" of Morsi and his supporters. Perhaps as leverage for those conditions, Obama directed his agencies to "review the implications under U.S. law for our assistance to the government of Egypt."

The State Department said Thursday that Obama met with members of his national security team and phoned in Secretary of State John Kerry to discuss the situation.

The State Department said Obama's national security team and Kerry also contacted Egyptian officials and regional partners, including Israeli Prime Minister Benjamin Netanyahu and the foreign ministers of Turkey and Qatar, to reiterate its demand for a "quick and responsible return of full authority to a democratically elected civilian government as soon as possible."

Egypt supposedly is moving toward a new election, after swearing in the chief justice as interim president on Thursday. However, the government bucked Obama on his latter demand, placing Morsi -- who calls the overthrow a "full coup" -- under house arrest along with a number of other aides.

At stake for Egypt is $1.5 billion in annual U.S. aid, mostly directed toward the country's military.

Sen. Patrick Leahy, D-Vt., chairman of the Senate Judiciary Committee, issued a stern warning to the military on Wednesday about that money.

"Our law is clear: U.S. aid is cut off when a democratically elected government is deposed by military coup or decree. As we work on the new budget, my committee also will review future aid to the Egyptian government as we wait for a clearer picture," he said.

Still, many Republicans -- despite their deep-rooted skepticism toward foreign aid -- praised the military after the takeover, indicating the U.S. should not abandon the institution.

"The Egyptian military has long been a key partner of the United States and a stabilizing force in the region, and is perhaps the only trusted national institution in Egypt today," House Republican Leader Eric Cantor said.

Sen. Bob Corker, R-Tenn., top Republican on the Senate Foreign Relations Committee, urged the administration to "look at the regional picture with our vital national security interests in mind" as it reviews U.S. aid.

"Our long-standing cooperation with Egypt, which is essential for stability in the region, should remain a priority," he said.

The president is also dealing with conservative criticism that his administration was too lenient with Morsi and the Muslim Brotherhood. While backing the military overthrow might send the wrong message about U.S. support for the democratic process, blatantly criticizing the overthrow could feed the criticism that the Obama administration enabled Morsi.

A column published in Foreign Policy magazine by Sen. Ted Cruz, R-Texas, shortly before the overthrow, accused the administration of staying on the "sidelines" during the latest protests.

"In what has to be one of the most stunning diplomatic failures in recent memory, the United States is -- in both perception and reality -- entrenched as the partner of a repressive, Islamist regime and the enemy of the secular, pro-democracy opposition," he wrote.

Gen. Martin Dempsey, chairman of the Joints Chiefs of Staff, took a tone similar to Obama's in describing the unrest. He warned in an interview on CNN, conducted shortly before the ouster, that there would be "consequences" if a transition were not handled well.

Yet he, too, did not describe this as a "military coup," but rather an "intervention."

A senior U.S. defense official told Fox News that Dempsey and Defense Secretary Chuck Hagel did not tell the Egyptian military not to carry out a coup in recent days, but urged more broadly for stability.