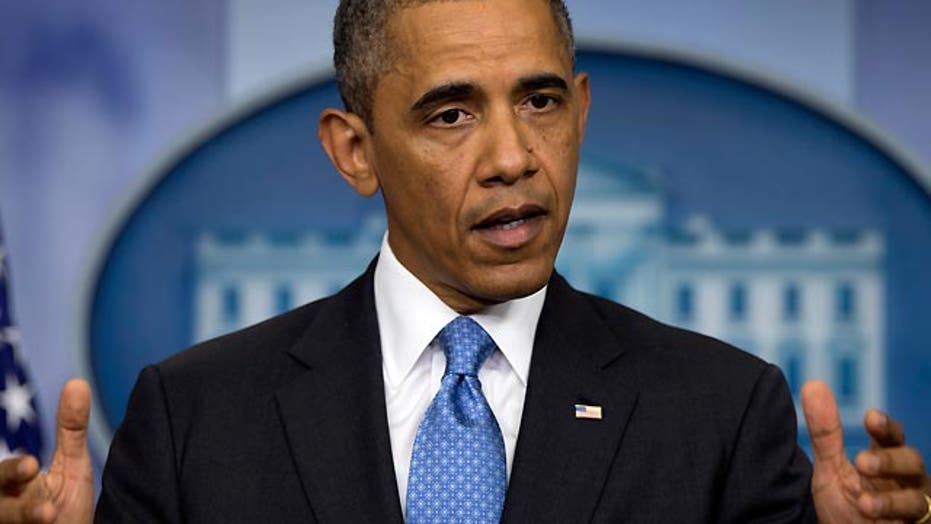 President Obama publicly and personally addressed the Trayvon Martin case for the first time since George Zimmerman was acquitted nearly a week ago, relating his own experiences to the "pain" the black community is feeling and going on to question so-called "stand-your-ground" laws.

The president delivered extensive remarks during a surprise appearance in the White House briefing room. He suggested race may have played a strong role in the case, saying that if a "white male teen" were involved, "both the outcome and the aftermath might have been different."

He went far beyond his remarks a year ago in which he stirred controversy by saying if he had a son, he'd look like Martin.

"Another way of saying that is Trayvon Martin could have been me 35 years ago," Obama said.

The president used the highly personal comments to, in his words, put the angst in the black community in "context." And he also appeared to give his support to Attorney General Eric Holder's call earlier in the week for a review of "stand-your-ground" laws.

The laws allow people to use lethal force if they feel threatened -- even if they might have the option of retreating.

"If we're sending a message as a society ... that someone who is armed potentially has the right to use those firearms even if there's a way for them to exit from a situation, is that really going to be contributing to the kind of peace and security and order that we'd like to see?" Obama said.

The president acknowledged that the law was not part of the Zimmerman defense, but suggested the laws might still "encourage" violence. In a provocative statement, the president also questioned whether Martin, if he had a gun, could have been "justified in shooting Mr. Zimmerman because he felt threatened."

The NRA has defended the stand-your-ground laws, saying they are vital to self-defense.

George Zimmerman's defense team put out a statement late Friday saying they "acknowledge and understand" the racial context of the case, and that it took "courage" for the president to say what he said.

But they also said "those who look at the facts of the case without prejudice will see that it is a clear case of self-defense, and we are certain that those who take a closer look at the kind of person George Zimmerman is -- something we understand the Department of Justice is currently doing -- we are confident they will find a young man with ... a diverse ethnic and racial background who is not a racist, a man who is, in fact, sensitive to the complex racial history of our country."

George Zimmerman's brother Robert Zimmerman responded to Obama's comments in an interview with Fox News, saying a lot of people wanted to hear from the president and "I'm glad he spoke out today."

He said he agrees that there should be "teachable moments." At the same time, he voiced concern that leaders may be responding to "pressure" as the Justice Department probes his brother to see if federal civil rights charges should be brought.

Obama appeared to manage expectations on that front during his remarks on Friday. He said he understands that protests may have to "work (their) way through," but said these cases are traditionally handled by state and local authorities.

He said Holder is reviewing, but that people should have "clear expectations."

Obama reiterated that the jury -- at the state level -- has spoken.

He also offered personal details that harkened back to the speech he gave on race as a candidate in 2008. Obama said: "It's important to recognize that the African American community is looking at this issue through a set of experiences, and a history that doesn't go away."

Obama said there are "very few" black men who haven't been followed while shopping at a department store -- "that includes me."

"I don't want to exaggerate this, but those sets of experiences inform how the African American community interprets what happened one night in Florida," Obama said.

The comments from the president -- particularly comments this extensive -- were not expected. It's unclear whether they will serve to fuel the debate or potentially ease tensions.

The Justice Department, it seems, is not dropping the issue any time soon.

Shortly before Obama spoke, members of the Congressional Black Caucus huddled in the Capitol with Justice Department officials, urging them to produce a study on the Martin case and make recommendations to avoid similar situations.

Fox News has learned that one of the CBC members, Rep. Frederica Wilson, D-Fla., has Travyon Martin's brother -- Jahvaris Fulton -- interning in her Miami office. He was a witness at the trial.