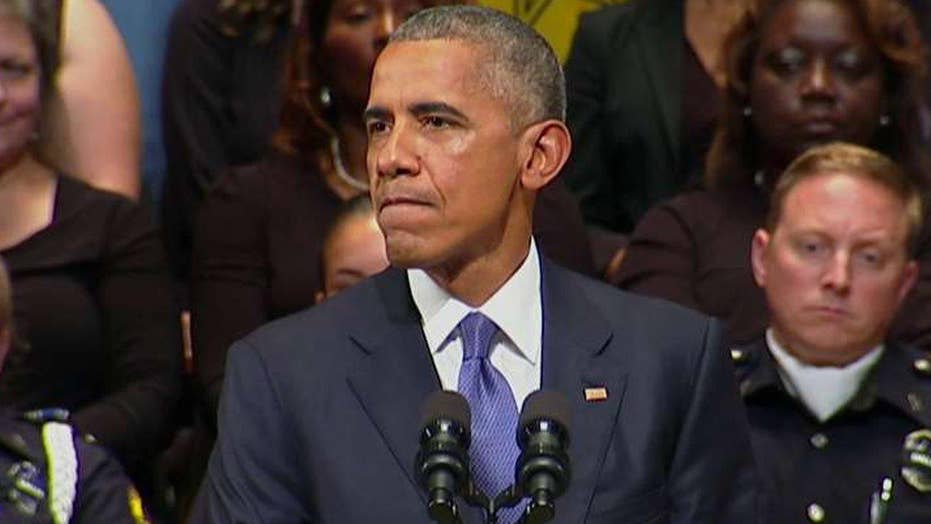 Obama at Dallas service: We are not as divided as we seem

President Obama joined the Dallas community Tuesday to honor the memories of the five police officers killed last week by a sniper, saying they “answered the call” to protect fellow Americans who now “are struggling with what we have witnessed.”

“The people of Dallas, people across the country, are suffering,” the president said at a memorial service where George W. Bush and others spoke. “All of us are wounded and suffering.”

The officers were fatally shot Thursday by Micah Johnson, a 25-year-old black Army veteran, purportedly angry about two recent incidents -- in Louisiana and Minnesota -- in which a police officer fatally shot a black male.

The killings occurred during a protest in downtown Dallas over the Louisiana and Minnesota incidents.

“I understand how we are feeling,” Obama said at the interfaith memorial service Tuesday at Meyerson Symphony Center, in Dallas. “Scripture tells us that in suffering there is strength, and strength brings character, and in character brings perseverance, then hope.”

Bush said the slain officers died “for the safety of strangers” and “are the best among us.”

“Today, the nation mourns. But to those of us who live and love in Dallas, we have lost five members of our family,” also said Bush, who was president during the Sept. 11, 2001, terror strikes, the worst attack in history on U.S. law enforcement.

The names of the five slain officers are Lorne Ahrens, Michael Krol, Michael Smith, Brent Thompson and Patrico Zamarippa. Their funeral services and burials are scheduled for later this week.

Obama, who cut short his official European NATO trip to attend the event, on Monday called the police killings a “hate crime” against police, according to Politico.

White House Press Secretary Josh Earnest told reporters Tuesday that Obama has called the families of Alton Sterling and Philando Castile -- the black males killed in Louisiana and Minnesota, respectively -- to offer his and first lady Michelle Obama’s condolences “on behalf of the American people.”

Earnest also could not remember another time in which the president attended a memorial service for which all of the victims were law-enforcement officers, though he has attended one in which first-responders were among the victims.