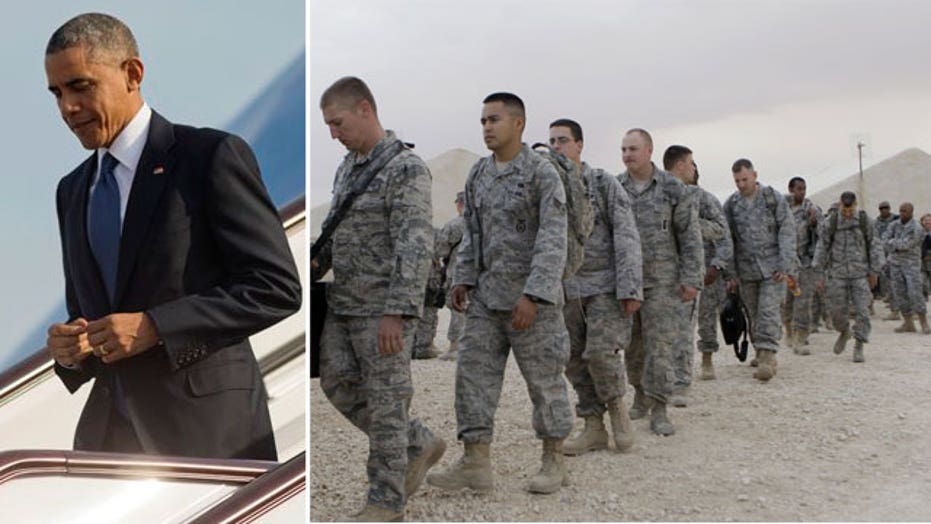 WASHINGTON – President Obama has approved sending up to 1,500 additional U.S. troops to Iraq, doubling the number being deployed to help Iraqi forces fight the Islamic State.

The president also requested an additional $5.6 billion on Friday for the war against the Islamic State, in part to cover the additional deployments.

The decisions reflect a deepening U.S. involvement in the region, though the White House again stressed that U.S. personnel "will not be in combat," but rather training, advising and assisting Iraqi forces near Baghdad and Irbil.

The U.S. has been launching airstrikes on Islamic State group militants and facilities in Iraq and Syria for weeks, as part of an effort to give Iraqi forces the time and space to mount a more effective offensive. Early on, the Islamic State group gained ground across Iraq, as local Iraqi units threw down their weapons and fled or joined the insurgents.

Lately, with the aid of the U.S. strikes, the Islamic State has suffered a number of losses in Iraq, where it is fighting government forces, peshmerga and Shiite militias aided by Iran and the Lebanese Hezbollah group. Last week, Iraqi forces recaptured the town of Jurf al-Sakher. ISIS also lost Rabia, Mahmoudiyah and Zumar, a string of towns near the Syrian border, last month. Besieged Iraqi troops have also managed to maintain control of Iraq's largest oil refinery outside the town of Beiji north of Baghdad, despite numerous attempts by the Islamic State group to capture it.

At the same time, some have warned the U.S. operation is insufficient. In particular, there have been calls to send troops to the western Anbar province, where extremists have been slaughtering men, women and children.

A senior military official said one of the operations centers being set up by the U.S. will be in Anbar Province, and that it is likely that the bulk of the additional troops will be in Iraq by the end of the year.

The money will also go toward “replenishing or replacing munitions expended while conducting air strikes against ISIL, including from Air force and Navy platforms” as well as “financing operations and maintenance costs for air, ground and naval operations, including: flying hours; ship steaming days; and fuel, supplies and repair parts,” according to the White House.

CENTCOM Commander Gen. Lloyd Austin and Defense Secretary Chuck Hagel were at the White House on Friday briefing a bipartisan congressional group invited by the president. Chairman of the Joint Chiefs of Staff Gen. Martin Dempsey had first hinted at the announcement during an Oct. 30 briefing at the Pentagon.

The increased number of troops will allow the U.S. to spread its forces to additional locations across Iraq.

He added, “Over the coming weeks, as we finalize the training site locations, the United States will work with coalition members to determine how many U.S. and coalition personnel will be required at each location for the training effort.”

Earlier this week, British education secretary Nicky Morgan announced British military officers would also be heading back to Iraq to help fight ISIS. Morgan confirmed that a group of officers would be sent to a U.S.-led training camp in Baghdad.

U.K. Prime Minister David Cameron said there would be no troops on the ground fighting ISIS.

Pressure has been mounting on western nations to provide more assistance to Haider al-Abadi, Iraq’s new prime minister as forces try to reclaim towns and territories in the northern and western part of the country. U.S. and British troops were part of the 2003 Iraq invasion that overthrew dictator Saddam Hussein.

Fox News' Justin Fishel and Jennifer Griffin and The Associated Press contributed to this report.