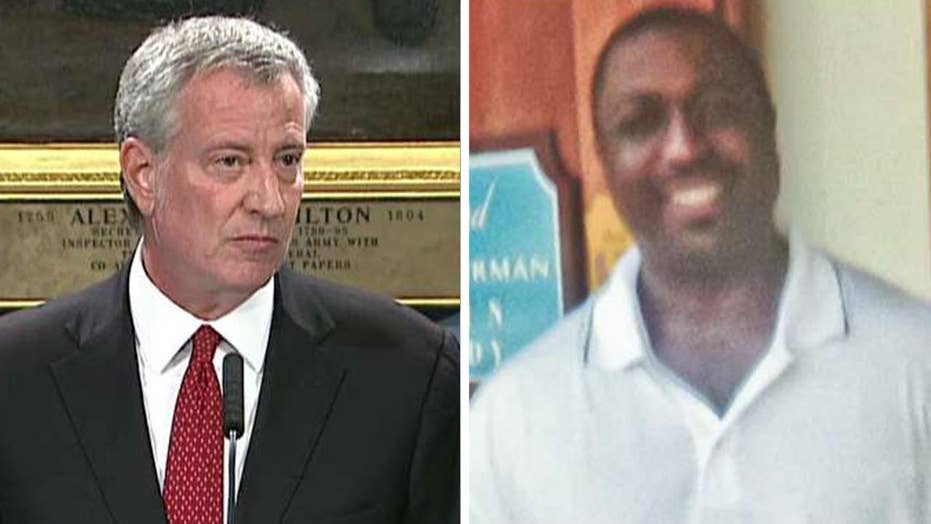 The New York Police Department union on Friday tore into Mayor Bill de Blasio over his handling of the case of the officer charged in the 2014 death of Eric Garner -- accusing him of creating a "chilling effect."

“Over the last number of years since this mayor walked into City Hall, I’ve stood at this podium and said [de Blasio's] decisions will have a chilling effect on New York City police officers,” a furious New York City Police Benevolent Association President Patrick J. Lynch told reporters Friday. “Well, the criminal advocates have gotten what they want -- the police department is frozen.”

The union, which represents the 24,000 rank-and-file of New York’s Finest, has had a tense relationship with the left-wing mayor, particularly in relation to de Blasio's comments about policing and race. But that has deteriorated even further with his handling of the Garner case and Friday's decision by a NYPD judge to recommend the officer involved be fired.

Garner died in 2014 after his arrest for the sale of untaxed cigarettes. After Garner refused to be handcuffed, Officer Daniel Pantaleo took him down using what prosecutors said was a banned chokehold. The officer's attorney argued the hold used an approved “seat belt” technique.

Garner died of cardiac arrest and video of him saying “I can’t breathe” during the confrontation before passing out went viral. It became a rallying cry for the “Black Lives Matter” movement, with activists using the incident as a example of alleged racist discrimination by police. (Garner was black; Pantaleo is white.)

Patrick J. Lynch, president of the Patrolmen's Benevolent Association of the City of New York, gestures while he speaks during a press conference regarding Officer Daniel Pantaleo, Friday, Aug. 2, 2019, in New York. ( (AP Photo/Kathy Willens)

A grand jury declined to indict Pantaleo, and last month the Justice Department ruled against the Civil Rights Division’s recommendation that charges be brought against him. But on Friday, NYPD Deputy Commissioner of Trials Rosemarie Maldonado recommended Pantaleo be fired.

The case now goes to Police Commissioner James O’Neill, who will decide later this month whether to accept the recommendation.

De Blasio, who is running for president, angered officers when he commented on the pending case during Wednesday's Democratic primary debate, when he promised the Garner family would get “justice.”

“I know the Garner family,” de Blasio said at the debate in Detroit. “They’ve gone through extraordinary pain. They are waiting for justice and are going to get justice. There’s finally going to be justice.”

De Blasio was surrounded by other Democrats demanding Pantaleo be fired, and was interrupted by protesters demanding the same. 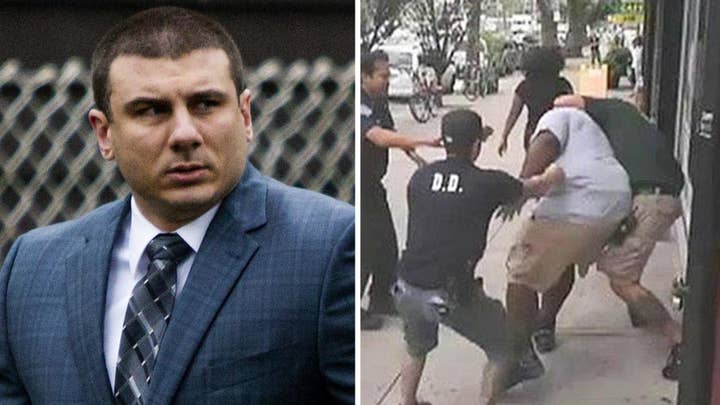 “How dare the mayor say it was a clean process. How dare the mayor say ‘I didn't give my opinion, I didn't talk to anyone,’” Lynch said, before addressing de Blasio. “You didn’t have to talk to anyone, you’re talking to the cameras, you talked to the nation the other day and you said justice will be served for that family and you sent your message to the judge advocate.”

Approximately 20 police officers followed de Blasio to Detroit, where they protested over pay, alleging that they are paid on average 30 percent less than other police forces in the region.

But it is what cops see as de Blasio’s failure to back his officers that has angered the union the most. On Friday, Lynch said de Blasio has lost the confidence of the force and “brought the police department to the gutter.”

He also warned officers that the case shows they won’t have the backing of City Hall if they are put in a situation where they have to put their hands on an alleged perpetrator.

“Is the police commissioner going to be there?” he asked. “We’ll find out.”