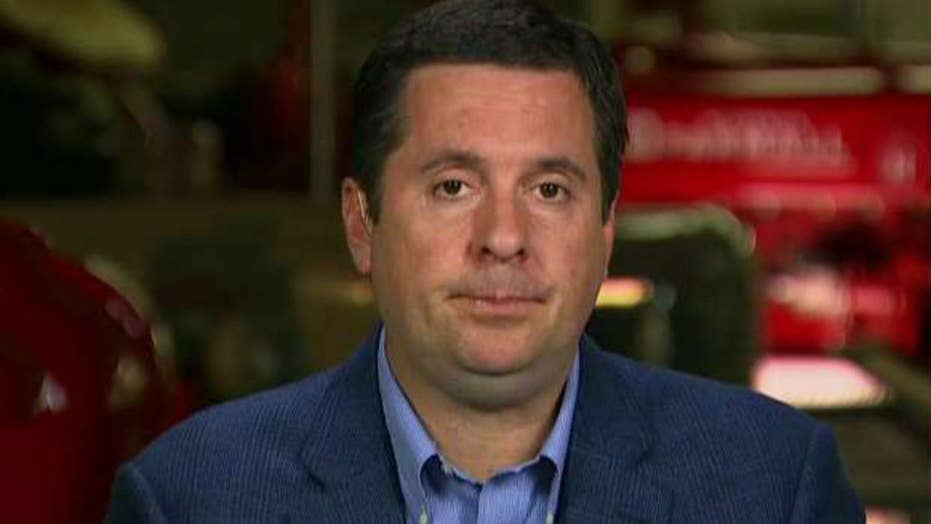 Nunes: Twitter should come clean and give us their algorithms

California GOP Rep. Devin Nunes, who has opened a $250 million lawsuit against Twitter alleging that the social media company negligently failed to remove defamatory and malicious tweets against him and his family, told Fox News on Monday that the lawsuit will be "the first of many."

Appearing on Fox News’ "Hannity," Nunes said he was going after Twitter first because they “are the main proliferator” of “fake” and “slanderous” news.

“The case we’re basically making is this was an orchestrated effort. So people were targeting me, there were anonymous accounts that were developed … and these accounts are not supposed to exist. Twitter says that they don’t have accounts that do this,” he said.

Nunes' lawsuit accuses Twitter and a handful of its users of "shadow-banning conservatives" -- including himself -- to influence the 2018 election by censoring opposing viewpoints. Acknowledging the role that Twitter plays in modern politics, Nunes accused the social media platform of “gaslighting” for all of the news and “proliferating” only the content they supposedly agree with.

“And when they’re regulating us, they're regulating what people can see on my tweets – which they’ve done – and then they’re proliferating out things that they agree with the algorithms that they develop," he said. "They need to come clean. They’re not a public square. They are content developers.”

Twitter CEO Jack Dorsey testified before Congress last year that his platform is a kind of "digital public square," although he has insisted that Twitter, as a private company, retains the right to censor speech.

Nunes, accused Twitter of a double standard, questioning why the company would allow certain accounts -- which, by its own terms of service, he said shouldn't exist in the first place -- to attack him "hundreds of times a day."

"I guarantee you, if I put something out that was sexually explicit or attacked someone personally they would stop it," Nunes said. "They never did that to any of the people that were coming after me or other conservatives."

Nunes' lawsuit alleges defamation, conspiracy and negligence, seeking not only damages, but also an injunction compelling Twitter to turn over the identities behind numerous accounts he says harassed him and deliberately interfered in his investigation as House Intelligence Committee chair into corruption and Russian involvement in the 2016 Presidential Election.

"This is part of the continuing Russia investigation. We're not going to just let all these fake news stories that were written about this investigation, about this hoax -- that were lies -- we're going to challenge every single one of them in court. We're just starting with Twitter," Nunes said.