Former U.S. Ambassador to the United Nations Nikki Haley on Tuesday described China as America’s’ “foremost national security concern,” warning that the conventional wisdom about the communist superpower is “dead.”

“China has become our foremost national security concern,” she said in an address to the Asian Leadership Conference in Seoul, South Korea. “ Does this mean it’s America’s enemy? No. Not necessarily. At one and the same time it is a principal trade and investment player, our chief strategic competitor, and our most serious potential military antagonist.”

TRUMP SAYS DEAL WITH CHINA WILL HAPPEN 'WHEN THE TIME IS RIGHT,' US NEEDS TO 'MAKE UP' GROUND FIRST

The former South Carolina governor dismissed the theory of convergence, which predicted that as China grew wealthier, it would have to liberalize politically at home and therefore become similar to the U.S. in domestic politics and its outlook on foreign relations.

She called such a theory “false comfort," and said that Chinese President Xi Jinping has “effectively killed the notion of convergence.”

“China is growing economically without democratizing. On the contrary, its government is thoroughly ideological and increasingly repressive,” she said, according to prepared remarks. “Its military ambitions are not just regional and defensive; they are global and designed to intimidate.”

“So, I’m here to tell you that the long-standing conventional wisdom about China is dead. Wishful thinking has been overtaken by events,” she said.

Haley said that Xi's China has created “an Orwellian surveillance state,” kidnapped domestic critics abroad, stolen intellectual property from foreigners (including the U.S.) and is using economic policy to strengthen the government’s power at home and abroad: “The Americans think business, while the Chinese think power politics.”

As an example of Chinese aggression, she pointed to Beijing’s Belt and Road Initiative -- an ambitious international infrastructure and development program. Haley noted that it “relies heavily on corrupt financing arrangements that burden foreign governments with debt they cannot afford to pay."

She drew attention to a “civil-military integration policy” by which the Chinese government requires even privately-owned companies to work for the military, meaning that “business with Chinese is not just business.”

Haley’s remarks come as the Trump administration is ramping up sanctions against Beijing as part of an escalating trade war between the two countries. The U.S. last week began increasing tariffs from 10 percent to 25 percent on $200 billion of Chinese goods. China responded by upping tariffs on $60 billion of U.S. goods.

A Chinese delegation was in Washington last week, but while talks broke off, both sides indicated that further talks will be held. 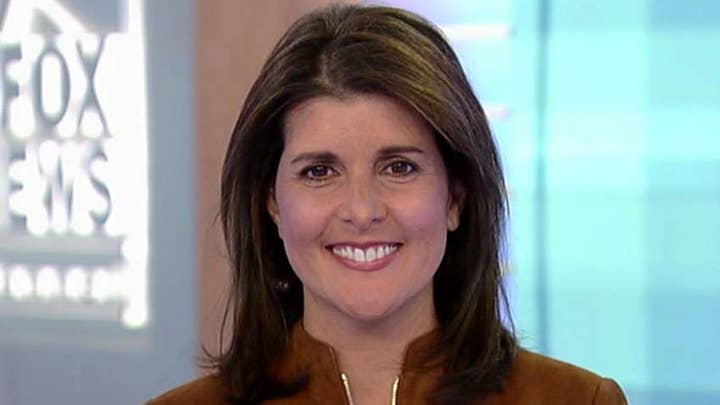 Trump struck a positive note on his relationship with Xi on Tuesday, saying in a tweet that his “respect and friendship with [Xi] is unlimited” but that any trade deal must be “a great deal for the United States or it just doesn’t make any sense.”

Trump said Monday that he will meet with the Chinese premier during the G20 summit in Osaka, Japan at the end of June.

In her remarks Tuesday, Haley said that Americans will look "with deep regret" at the state of U.S. relations with China, noting that the U.S. has looked for decades to build better relations, and even helped China enter the World Trade Organization.

"We gave it access to our markets even though China did not reciprocate," she said. "China's increasingly hostile policies cannot be explained as a reaction to unfriendliness from our side."

She cautioned that the U.S. should "observe China with care" and think about the country "critically, creatively and courageously."

"Managing our relationship with China is a complex strategic puzzle, and the stakes could be life or death," she said.