Former U.N. Ambassador Nikki Haley argues President Biden is showing 'he's more interested in reversing everything President Trump did than being strategic in how we keep America strong going forward.'

Former U.N. Ambassador Nikki Haley argued on Wednesday that President Biden’s first week in office has proven to be "good" for Russia.

"One of the things that bothered him [Putin] the most was how energy independent we had become," Haley explained.

Haley also pointed out that on Thursday Biden had proposed extending the last remaining nuclear arms control treaty between the two countries by five years, saying it is "something that gave Russia a lot of advantage." The New START treaty was set to expire on Feb. 5.

The treaty, signed in 2010 by President Obama and Russian President Dmitry Medvedev, limits each country to no more than 1,550 deployed nuclear warheads and 700 deployed missiles and bombers, and envisages sweeping on-site inspections to verify compliance.

Russia has long proposed to extend the pact without any conditions or changes, but President Trump’s administration waited until last year to start discussions and made the extension dependent on a set of demands. The discussions stalled, and months of bargaining have failed to narrow differences. 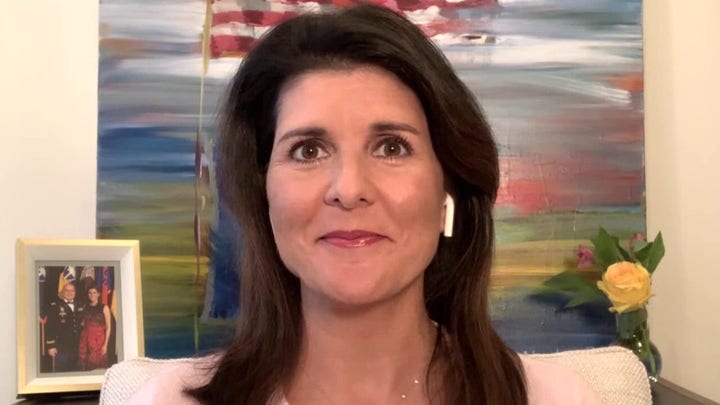 On Friday, the Kremlin welcomed Biden’s proposal. Putin’s spokesman said that Russia stands for extending the pact and is waiting to see the details.

Haley also argued on Wednesday that President Biden is "more interested in reversing everything President Trump did" instead of looking forward.

The former South Carolina governor then outlined a series of questions for Biden, asking why he didn’t "sit down and talk with those governors" before halting the Keystone XL oil pipeline project and banning fracking.

"With China, why aren't you calling them out on the human rights issues that they have instead of jumping back into the Human Rights Council?"

Haley was part of the Trump administration in 2018 when it pulled the U.S. out of the Human Rights Council. As she announced that decision, she called the council "a protector of human rights abusers, and a cesspool of political bias."

Critics, of which Haley has been perhaps the most high-profile, have pointed to the council’s membership, which currently includes countries such as Cuba, China and Russia -- all of whom were elected in 2020.

"This is about strategy," Haley said on Wednesday. "This is about being smart and what Biden is showing is he’s more interested in reversing everything President Trump did than being strategic in how we keep America strong going forward."