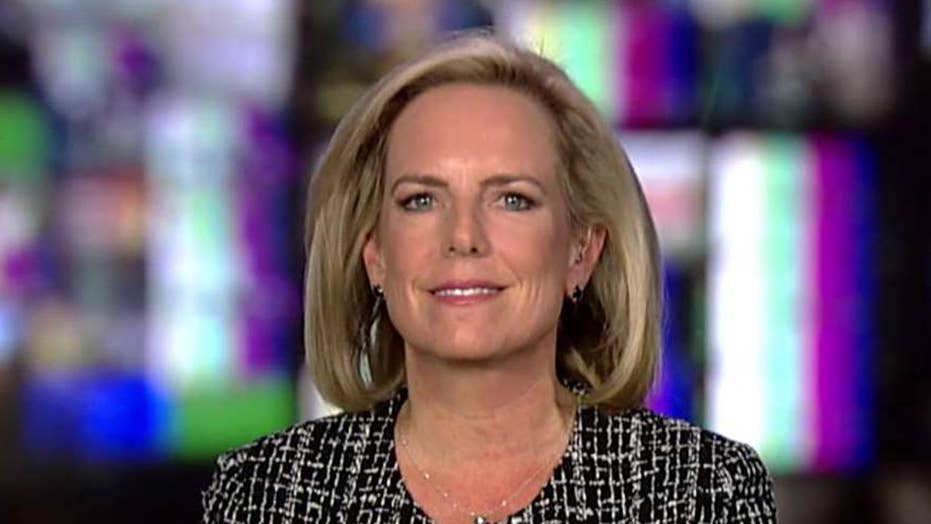 DHS Secretary Kirstjen Nielsen: 'Ridiculous' to pretend' that there is not a crisis on the southern border

On the eve of her trip to the southern border in Texas with President Trump, Homeland Security Secretary Kirstjen Nielsen told Fox News' "Hannity" that it was "offensive" and "disrespectful" for top Democrats to accuse Republicans of exploiting illegal immigration for political gain.

Nielsen, who met with congressional leaders Wednesday in the Situation Room with President Trump and has played a central role during talks to end a partial federal government shutdown, called that rhetoric disgraceful.

The DHS head alluded to the several Americans killed by suspected illegal immigrants that Trump referenced in his Tuesday night prime-time address from the Oval Office, including a California police officer whose death came the day after Christmas.

"It's offensive; it's disrespectful," Nielsen said. "I can't imagine being one of these victims' families and listening to an elected member of Congress claim that their pain and their suffering is manufactured. it's offensive, is what it is. But it's also unprofessional."

Nielsen reiterated the president's messaging that the surging numbers of illegal immigrant families attempting to cross the border represents a humanitarian problem.

"It's not just a security crisis -- it's a humanitarian crisis," Nielsen told host Sean Hannity. "We have Doctors Without Borders saying  one in three women on this journey are raped. seven out of 10 of these migrants are victims of violence."

A survey from 2015 to 2016 conducted by Doctors Without Borders that interviewed 467 "randomly sampled migrants and refugees in facilities the organization supports in Mexico" found that "nearly one-third of the women surveyed had been sexually abused during their journey." Among the reported perpetrators were gangs and members of the Mexican security forces.

"The facts are incontroverible," Nielsen added. "Anywhere we have built a wall, illegal migration has dropped 90-95 percent. ... Walls work. We can't say it enough."

"They have no alternative," Nielsen told Hannity, referring to congressional Democrats. "They refuse to engage, and it's very, very  disappointing.

"I don't know what the Democrats are doing," Nielsen concluded. "The president has made offers. ... They have come up with no solutions on their own."