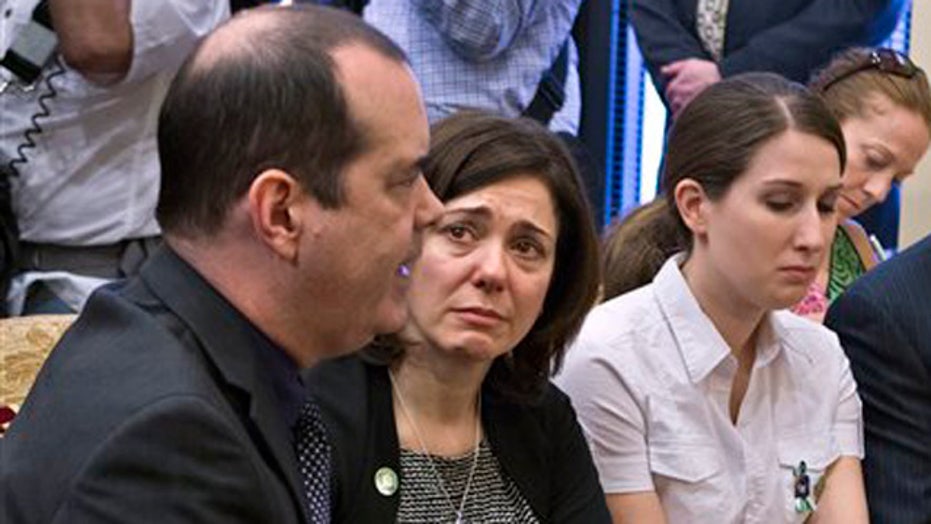 Are Newtown family members being used as political props?

President Obama is allowing the mother of a 6-year-old killed in the Connecticut school shootings to take his place for the weekly presidential radio address – as debates begin next week on Senate gun-control legislation.

The speech by Francine Wheeler marks the first time that somebody besides Vice President Biden has delivered the weekly radio and Internet address since Obama took office in 2009.

Wheeler’s son Ben was among the 20 first-graders and six adults killed in the Dec. 14 attack at Sandy Hook Elementary School in Newtown, Conn.

“It's a message that every American should hear,” the president said in explaining when he asked Wheeler to take his place.

He also said the efforts of Wheeler and others persuaded the Senate to take “a step forward” and that American after listening to her also should speak out “to make our country safer.”

"Thousands of other families across the United States are also drowning in our grief," says Wheeler says in the roughly 4-minute speech broadcast Saturday. "Please help us do something before our tragedy becomes your tragedy."

Her husband, David Wheeler, sat silently next to Wheeler as she made the recording in the White House Library. Both wore the small green pins that have become a symbol of the shooting.

The White House said Wheeler and her husband wrote the remarks.

"Sometimes, I close my eyes and all I can remember is that awful day waiting at the Sandy Hook Volunteer Firehouse for the boy who would never come home -- the same firehouse that was home to Ben's Tiger Scout Den 6," Wheeler said. "But other times, I feel Ben's presence filling me with courage for what I have to do, for him and all the others taken from us so violently and too soon."

Some of the Sandy Hook families, with Obama's blessing, have launched a stepped-up effort to push a gun control bill through Congress.

Obama traveled Monday to Hartford, Conn., about an hour's drive from Newtown, to make his case for action. On the return trip to Washington, he brought back 12 of the victims' family members, who have been meeting with senators.

The Senate is considering a Democratic bill backed by Obama that would expand background checks, strengthen laws against illegal gun trafficking and slightly increase school security aid. The bill passed its first hurdle on Thursday, and senators will vote on amendments to the legislation in the coming week.

Its fate in the Republican-controlled House is uncertain.

Shortly after the vote Thursday, White House spokesman Jay Carney said the voices of the Newtown families may have been the decisive factor.

“But we've got a lot of work to do before Congress finishes the job,” Obama acknowledged Saturday.

In the Republicans' weekly address, freshman Rep. Jackie Walorski of Indiana criticized the tax increases Obama proposed in the $3.8 trillion budget blueprint he unveiled Wednesday, calling it "a blank check for more spending and more debt."

Although she acknowledged that Obama's budget "offers signs of common ground" in the form of entitlement reforms the GOP has previously requested, she said it's wrongheaded for Obama to insist he'll only agree to those reforms if Congress also agrees to higher taxes.