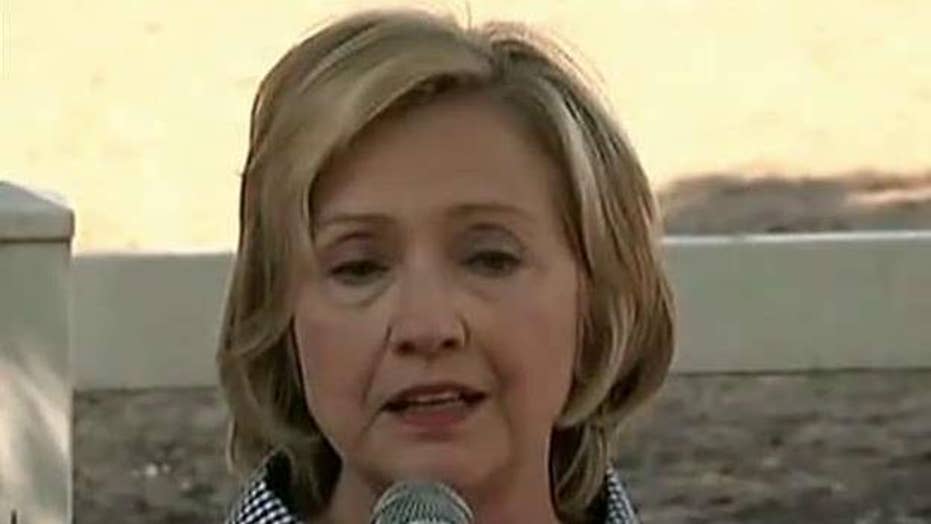 The department on Monday released its largest batch of emails yet, posting 7,800 pages of the former secretary of state’s communications.

The emails in question were deemed classified before their release by the department – and the former secretary of state has said all along she never sent emails with material marked classified at the time.

But the large number of emails containing now-classified material further underscores how much sensitive information was crossing her private server, a situation her critics have described as a security risk.

Shortly after the release, Republican National Committee Chairman Reince Priebus released a statement saying, "With the number of emails containing classified information now numbering nearly one thousand, this latest court-ordered release underscores the degree to which Hillary Clinton jeopardized our national security and has tried to mislead the American people."

Her email practices are also the subject of a federal investigation.

The documents in Monday’s release were largely sent or received in 2012 or 2013.

State Department spokeswoman Elizabeth Trudeau described it as the department's largest production to date as part of the court-ordered disclosure of emails from the personal server Clinton used while leading the department.

The emails also cover the tumultuous period before and after the Sept. 11, 2012, Benghazi terror attacks. On the night of the attacks, the communications show Clinton notifying top advisers of confirmation from the Libyans that then-Ambassador Chris Stevens had died.

Early the next morning, Chief of Staff Cheryl Mills tells Clinton they “recovered both bodies” and were looking to get out a statement; Sean Smith, information management officer, was the other State Department employee killed that night.

Another exchange from early 2013 shows retired diplomat James Jeffrey appearing to do damage control over a Washington Post piece from him titled, “How to Prevent the Next Benghazi.”

Jeffrey starts the conversation by warning Mills he’d been contacted by the Post regarding his views and reluctantly agreed to comply. He warns it would be posted and “you may see this piece as critical of expeditionary diplomacy. It's not; I've risked my life practicing it. But having lost over 100 personnel KIA and WIA (and two ARBs judging me) in my time in Iraq (and a son going back to Afghanistan on Department assignment this summer) I feel very strongly that we have to be prudent. If the media ask me if there is any daylight between me and you all I will cite the Pickering Mullen ARB and the Secretary's testimony and say absolutely not.”

Forwarding the article, he adds, “(Title is not what I gave them and stupid as I state explicitly at the end that being in Benghazi was the right policy call).”

Fox News’ Ed Henry and Kelly Chernenkoff and The Associated Press contributed to this report.