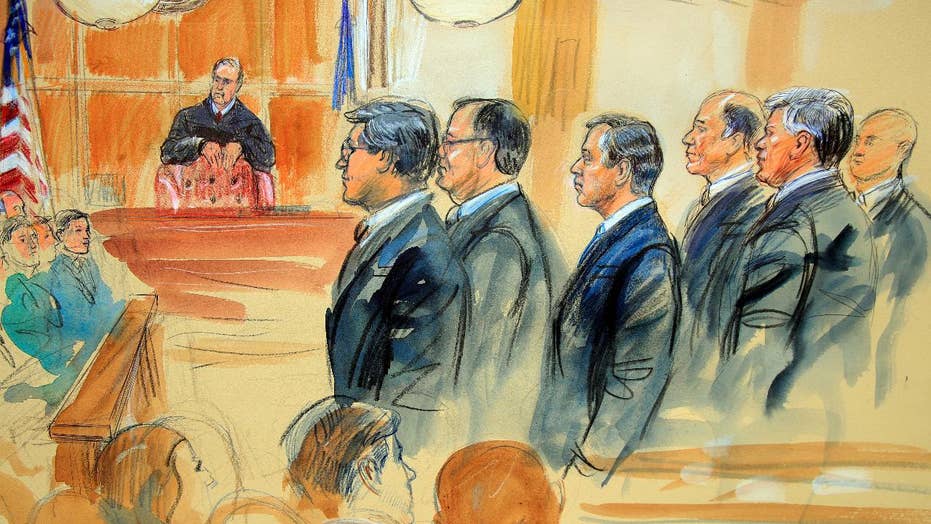 Special Counsel Robert Mueller’s prosecutors were lectured by a federal judge on Wednesday for the language they’ve used in the courtroom and more, as the trial of former Trump campaign chairman Paul Manafort entered its second day.

U.S. District Judge T.S. Ellis III specifically told prosecutors to stop using the word “oligarch” to describe wealthy Ukrainians, whose dealings with Manafort are at the heart of the fraud charges he faces in northern Virginia federal court.

The judge said the term has a “pejorative” meaning and is not relevant in this case. Further, he cautioned that using it could suggest Manafort is associated with bad people – and guilty by association.

“It’s not the American way,” the judge said. He noted that wealthy donors like George Soros or the Koch brothers also could be considered oligarchs.

The Mueller team was later rebuffed again by Ellis when they tried to introduce photos that eventually would become public of Manafort’s closets filled with suits and high-end clothing.

While it’s part of their effort to paint Manafort as a tax scofflaw who spent big on luxury items, Ellis would not allow the photos for now.

“Enough is enough. We don’t convict people because they have a lot of money and throw it around,” he said.

The judge said the photos would seem “unnecessary, irrelevant” and potentially “prejudicial.” Further, he reminded the lawyers that Manafort “is not on trial for having a lavish lifestyle, but for not reporting income on his taxes.”

Ellis has scolded members of Mueller’s team before, asserting back in May that the team was really interested in targeting President Trump.

But the case is proceeding, in the first trial arising from the Mueller probe.

The Manafort charges do not relate to allegations of Russian meddling or collusion with Trump figures in the 2016 campaign, but rather focus on allegations that Manafort cheated on his taxes and engaged in other fraudulent activity.

The opening day focused heavily on the defendant’s lavish lifestyle, as prosecutors said he lied to put his money ahead of the law. Defense attorneys -- and even the presiding judge -- reminded jurors that exorbitant wealth, in itself, is not a crime.

His defense team’s opening day strategy was to try and undermine the Mueller team’s star witness, Rick Gates, who was Manafort’s deputy in business and at the Trump campaign.

The attorneys argued Gates was the one who transferred all the money into accounts, including consulting fees collected from Ukrainian political figures. They said he was embezzling money and later lied about it to investigators – before agreeing to flip and testify against Manafort.

But the Mueller team contends Manafort bankrolled a luxurious globe-trotting lifestyle with money he wasn’t paying taxes on.

Assistant U.S. Attorney Uzo Asonye told the jury Tuesday that Manafort considered himself above the law as he funneled tens of millions of dollars through offshore accounts to pay for personal expenses such as a $21,000 watch and a $15,000 jacket made of ostrich.

Fox News’ Gregg Re and Jake Gibson and The Associated Press contributed to this report.