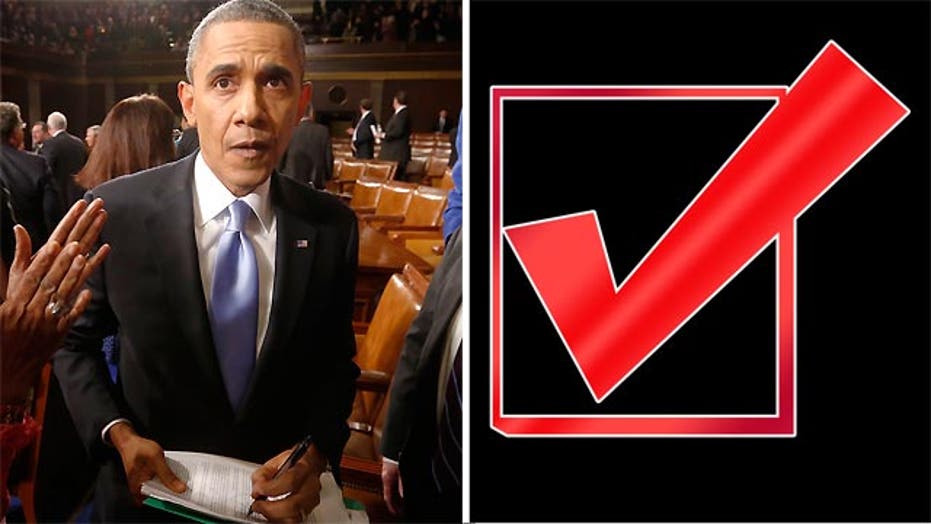 Inside the numbers on health care, economy

Did plenty of people tune out this year’s State of the Union, or is that just a talking point spouted by bored Beltway pundits?

The front page of yesterday’s New York Post was about Peyton Manning being “on the brink of immortality” and some Seattle Seahawks dissing the city as “rude”—this in the runup to a Super Bowl that is actually in New Jersey.

The next few pages were filled with local news and a picture from Sports Illustrated’s upcoming swimsuit issue, though what the woman is wearing does not qualify as a swimsuit. Only on pages 8 and 9 were a story about President Obama’s speech (“Limping into his sixth year in office…”) and a two-thumbs-down column by John Podhoretz.

Of course, the Post is hardly the only media bellwether, even among the tabloids. The Daily News goes with “$10.10 WINS!”—a play on the call letters of New York’s famous all-news radio station—declaring victory for the paper’s “fair wage” campaign. (The triumph, of course, extends only to the federal workers whose pay was unilaterally raised by the president.)

But when the most exciting thing that happens on State of the Union night is that a congressman, Michael Grimm, threats to throw a reporter off a balcony (and “break you in half”) for asking an ethics question, it’s not a great sign for POTUS.

If the early cable ratings are any indication, interest has really gone south. The speech’s audience was down 43 percent since last year on CNN, and 24 percent on MSNBC, according to TV Newser. On the other hand, Fox’s speech ratings were up 28 percent.

(The figures: 4.7 million viewers on Fox News, 2.3 million on MSNBC, 2.1 million on CNN. On the broadcast networks, NBC led the pack, averaging just under 7 million.)

The general atmosphere surrounding the speech was a downer (except perhaps in the view of CNN contributor Alex Castellanos, who memorably said that “a speech by Barack Obama is a lot like sex, the worst there ever was is still excellent”). And that has encouraged those who say, well, the republic got along fine before Woodrow Wilson showed up to deliver the address in person in 1913.

The Atlantic’s Conor Friedersdorf, writing before the SOTU, calls it “a banal, risk-averse, scattershot speech that could be cancelled without any great consequence.”

And Politico’s Todd Purdum, with an illustration of a clown show:

“The limitations of the speech’s hodge-podge genre have not stopped the media from investing the annual ritual with outsize importance. Indeed, for at least a couple of decades, the Washington punditocracy has portrayed the State of the Union as a make-a-break, do-or-die, cliché-of-your-choice occasion for whoever happens to be the sitting president. News organizations (including this one) have capitalized on the hype to sponsor marketing and promotional events — countdown clocks, watching parties, after-panels, live-blogging — and have coined an ungainly acronym, SOTU, to sum it all up.”

My view is that while the media hoopla is out of whack, the one saving grace of the State of the Union is that it forces a public discussion, however brief, of actual issues. And officials in various administrations have told me it imposes a discipline that forces them to make policy choices.

As for the Obama address itself, the right highly disliked it and the left…didn’t much like it.

“My general impression was this was a remarkably boring speech, intellectually and rhetorically,” says National Review’s Jonah Goldberg. “Not every idea was terrible. But no idea was particularly exciting, or all that significant. Because it lacked ambition, it was a far less offensive speech that I thought it would be. He soft-pedaled the inequality schtick, preferring instead to talk the more optimistic topic of ‘opportunity.’ I thought this fell flat, at least in part because he tried to make it sound like the economy was going, if not great, then really well. That’s a hard message to sell against the backdrop of Americans’ lived experience, not to mention the White House’s insistence that America desperately needs ‘emergency’ extensions of unemployment payments, etc.

“His defense of Obamacare was short and almost perfunctory. I did find his mocking of GOP alternatives nothing less than galling.”

“There was a strange disconnect between what the president’s advance people advanced, and what he actually said. Obama did announce one bold decision that will actually change lives: an executive order to increase the minimum wage for federal contract workers. But for a speech that was promoted by staff as a bold take-charge moment for a president tired of being thwarted by the GOP, and derided in advance as the equivalent of a martial law declaration by the right, it was unexpectedly conciliatory and short on concrete action…

“Overall, it was a well-delivered but tepid and still disappointingly cautious speech.”

Guess what, he still gets to deliver another one next year.

Remember all the pundits who said that Mike Huckabee hurt himself with his RNC speech about “Uncle Sugar” and “libido”?

Well, the jury is out on a Republican bringing up a woman’s sex drive, even though the former governor and Fox News contributor was describing the Democratic view of women. But a new PPP poll has Huckabee in the lead for the 2016 nomination, at 16 percent.

Jeb Bush trails with 14 percent, and Chris Christie—all but written off by some pundits—with 13 percent. Rand Paul had 11 percent.

Hillary, meanwhile, leads Huckabee 46 to 43, and leads Christie 45 to 42. So the two Republicans most beat up by the press recently are quite competitive with the Democratic front-runner.

My only caveat: Such early polls are largely meaningless.