MSNBC contributor Noah Rothman tweeted out a direct apology to Rep. Joaquin Castro D-Texas, Thursday, after mistaking him for his twin brother Julian during an episode of "Morning Joe."

MSNBC contributor Noah Rothman tweeted out a direct apology to Rep. Joaquin Castro D-Texas, Thursday, after mistaking him for his twin brother Julian during an episode of "Morning Joe."

Julian served in the Obama administration as secretary of Housing and Urban Development from 2014-2017 and is now running for the Democratic presidential nomination in 2020.

Rothman, who serves as an associate editor for Commentary magazine, cited a Fox News town hall without realizing he was referring to Joaquin's brother instead of him.

"Congressman, I wanted to ask you briefly -- you had said on a Fox News town hall that it is your impression that this administration is 'hell-bent on moving towards war with Iran,'" Rothman said.

JULIAN CASTRO: AMERICANS WILL LOOK BACK AT TRUMP AND ASK 'WHAT IN THE HELL WAS WRONG WITH THAT PRESIDENT?'

"In the interim, we’ve had now multiple attacks on commercial shipping and an attack on an American drone and the administration’s response seems relatively restrained. So what is your view as to why it's the administration that is being bellicose here and not Teran?

Joaquin quickly corrected Rothman and said he hasn't spoken to Fox News about Iran. Rothman immediately apologized and was embarrassed, but said the mixup must happen all the time. 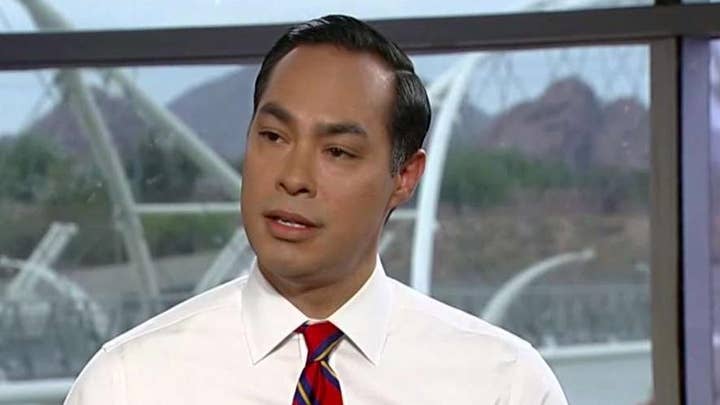 "Well, the first thing is I have to correct you. The person that did the Fox News town hall was my twin brother who is running for president," Joaquin replied.

"I apologize," Rothman said. "That is a truly awful confusion on my part. But I’m sure it’s not the first time this happened."

Joe Scarborough attempted to provide comic relief and said he gets confused with his evil twin brother "Skippy," specifically during Wednesday's episode when he gave an impassioned rant about Robert Mueller.

"People always confuse me, Congressman, with my evil twin brother, skippy. Skippy was on yesterday yelling about Robert Mueller," he said. "I was horrified watching it at home."