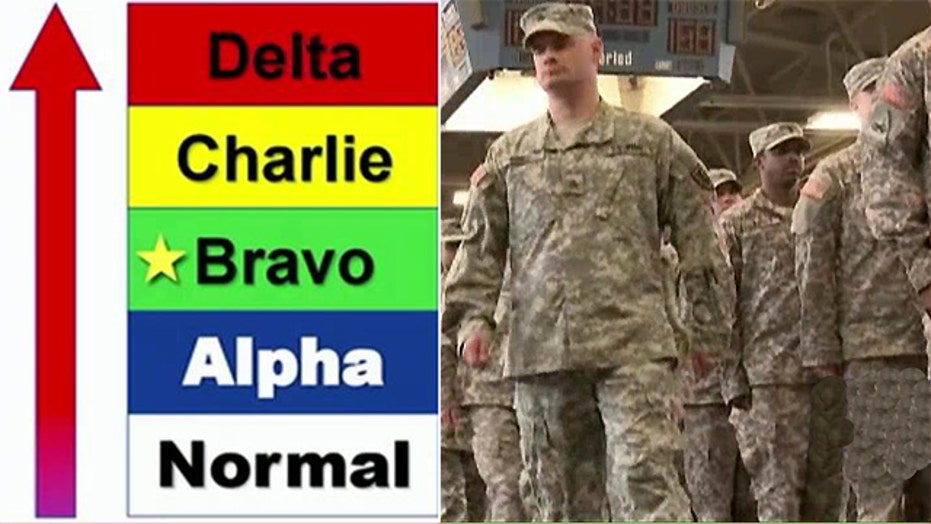 The U.S. military has raised its alert level for bases in North America to its highest since the 10th anniversary of 9/11 in the face of mounting threats from Islamic State sympathizers on American soil.

The move, which officials said is not based on a specific threat, was “informed by recent events,” a spokesman for U.S. Northern Command told Fox News.

The level, known as "Bravo," is the third of five levels of alert and means increased security at military posts across the country. A day earlier, FBI Director James Comey offered blunt remarks about the domestic threat from ISIS sympathizers, saying hundreds and possibly thousands of people in America are following ISIS on social media and consuming their "poison."

“The USNORTHCOM Commander raised the baseline Force Protection Condition as a prudent measure to remind installation commanders at all levels within the USNORTHCOM area of responsibility to ensure increased vigilance and safeguarding of all DOD personnel, installations and facilities,” the statement said. “This change, in addition to random drills or exercises, is a mean to ensure that we effectively execute our force protection mission."

The heightened alert means additional security measures can be taken including stricter inspections of vehicles and IDs on military posts across the country. On the heels of the decision, the National Museum of the U.S. Air Force in Ohio canceled a scheduled concert for Friday night, citing "elevated security measures."

The DOD statement said they share the “same concern about the potential threat posed by homegrown violent extremists, as discussed publicly by Director Comey and others." The DOD said the change is “not tied to a specific, credible threat,” though “recent events have led us to recognize the need to take prudent steps.”

Fred Burton, of the global intelligence firm Stratfor, said the move likely was influenced by Sunday's incident in Garland, Texas, where two suspected homegrown jihadists tried to storm an event that included a "Draw the Prophet" Muhammad contest. Both were killed, and one security guard was injured in the attack, which ISIS took credit for in online posts.

"An overabundance of caution today in this kind of environment is certainly prudent but I think it's the new normal," Burton said. "The Islamic State or activists on the ground here would certainly view a military installation in any capacity as a high value target, but they would not succeed."

In fact, Burton said, "this kind of increase could lead to a potential push [by terrorists] to softer targets like recruitment offices."

Steven Bucci, a former top Pentagon official who now works with the Heritage Foundation, said Comey's latest remarks and the elevated alert level indicate this is a "real" threat.

"This is a very dynamic battlefield and one that shifts constantly," he said, noting the rise in radicalization through digital media.