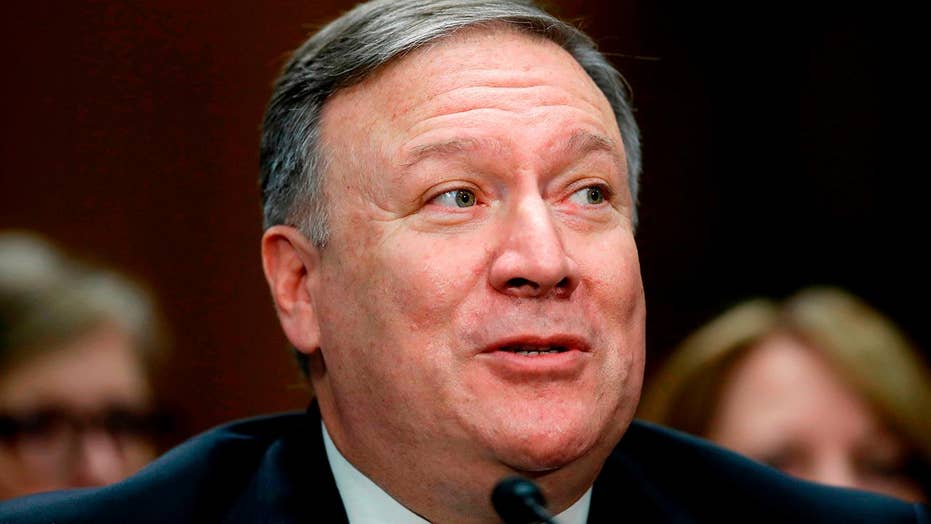 President Trump's pick to be the next secretary of state still appears on track for confirmation by the full Senate; Rich Edson reports from Capitol Hill.

The panel had deadlocked on a party-line vote after Georgia Republican Sen. Johnny Isakson, who had been expected to vote for Pompeo, missed the committee meeting because of a funeral.

But the committee then voted favorably on his nomination after Delaware Democratic Sen. Chris Coons, who opposes Pompeo, agreed to vote "present" instead of "no" because of Isakson's situation. The final tally was 11 to 9 with 1 present. Isakson was allowed to vote by proxy in this particular case.

Despite the committee drama, Pompeo still appears poised to secure the necessary 51 votes for confirmation from the entire Senate, with three red-state Democrats also saying they will support him.

Indiana Democratic Sen. Joe Donnelly was the latest Democrat to announce his support, saying Monday on Twitter that Pompeo is “capable of advancing U.S. interests and leading the State Department.”

He follows Democratic Sens. Joe Manchin of West Virginia and Heidi Heitkamp of North Dakota, who both are facing tough reelection battles, in backing Pompeo.

“After meeting with Mike Pompeo, discussing his foreign policy perspectives, and considering his distinguished time as CIA Director and his career in public service, I will vote to confirm Mike Pompeo to be our next Secretary of State,” Manchin said Monday.

There had been uncertainty ahead of Monday's committee vote. After signaling they could oppose Pompeo in committee, Kentucky Sen. Rand Paul and Arizona Sen. Jeff Flake both announced Monday they would vote for him.

Paul said he offered his support to Pompeo after being assured by the president that Pompeo would promote Trump's foreign policy views.

Republican lawmaker from Kentucky joins 'The Story' to explain his reverse course decision to support President Trump and vote in favor of Mike Pompeo as the new secretary of state.

“I’ve always been an advocate and a supporter of the president on this, and I want to make sure the people around him share his vision,” Paul said Monday night on Fox News’ “The Story with Martha MacCallum.”

Flake had been undecided, but told reporters ahead of the committee meeting that he would support Pompeo.

Pompeo is a former Republican congressman from Kansas who has been serving as director of the CIA. All Democrats on the panel said they would vote against him.

Earlier, the president lashed out at the “obstructionists” who oppose Pompeo, calling for more Republicans to be elected to the Senate.

“Hard to believe Obstructionists May vote against Mike Pompeo for Secretary of State,” the president tweeted Monday. “The Dems will not approve hundreds of good people, including the Ambassador to Germany. They are maxing out the time on approval process for all, never happened before. Need more Republicans!”

Trump has already entrusted Pompeo with high-level diplomacy, sending him to North Korea over Easter weekend to meet with the rogue nation’s leader, Kim Jong Un, according to the White House.

Trump said on social media “a good relationship was formed” during the meeting, and the two men reportedly discussed the release of three Americans being held in the Asian nation.

But Democratic New Jersey Sen. Bob Menendez, the foreign relations committee’s ranking member, has accused Pompeo of a lack of transparency over the North Korea visit.

“I don’t expect diplomacy to be negotiated out in the open, but I do expect for someone who is the nominee to be secretary of state, when he speaks with committee leadership and is asked specific questions about North Korea, to share some insights about such a visit,” Menendez recently said.

While he was confirmed to lead the CIA with a 66-32 vote last year, Pompeo has faced new challenges in the Senate, with lawmakers decrying a “lack of diplomacy” they say is needed to act as the nation’s top diplomat.

Pompeo needs 51 votes to be confirmed by the full Senate to succeed Rex Tillerson, who was ousted in March.

So far, at least four Democrats who voted to confirm Pompeo as CIA director have indicated they will not do so for secretary of state: Sens. Dianne Feinstein of California, Tim Kaine of Virginia, Brian Schatz of Hawaii and Jeanne Shaheen of New Hampshire.

Paul, the libertarian-leaning senator from Kentucky, was the only Republican to vote against Pompeo during his CIA confirmation hearing.