Michele Obama, the former first lady, said in an interview that aired Sunday that she "stopped even trying to smile" during President Trump inauguration and wondered in her new book why so many women rejected "an exceptionally qualified female candidate and instead choose a misogynist as their president."

Obama spoke with ABC News in a wide-ranging interview.

She recalled in her book, "Becoming," watching her husband step aside for Trump on Jan. 20, 2017.

She wrote in the book that "the vibrant diversity of the two previous inaugurations was gone…Someone from Barack’s administration might have said that the optics were bad—that what the public saw didn’t reflect the president’s reality or ideals. But in this case, maybe it did. Realizing it, I made my own optic adjustment. I stopped even trying to smile."

"The whole thing was crazy and mean-spirited, of course, its underlying bigotry and xenophobia hardly concealed," reads an excerpt, according to the report. 'But it was also dangerous, deliberately meant to stir up the wingnuts and kooks." 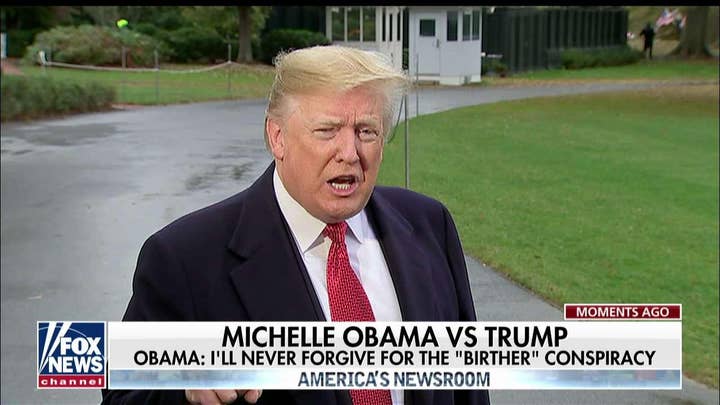 She reportedly accuses the president of jeopardizing her family’s safety.

"What if someone with an unstable mind loaded a gun and drove to Washington? What if that person went looking for our girls? Donald Trump, with his loud and reckless innuendos, was putting my family’s safety at risk. And for this I’d never forgive him."

As he left for Paris Friday, Trump chose not to respond to the former first lady, telling reporters, “Oh, I guess she wrote a book. She got paid a lot of money to write a book and they always insisted you come up with controversial.” Trump instead changed the subject to his predecessor, Barack Obama, saying, “I’ll never forgive him” for making the country “very unsafe.”