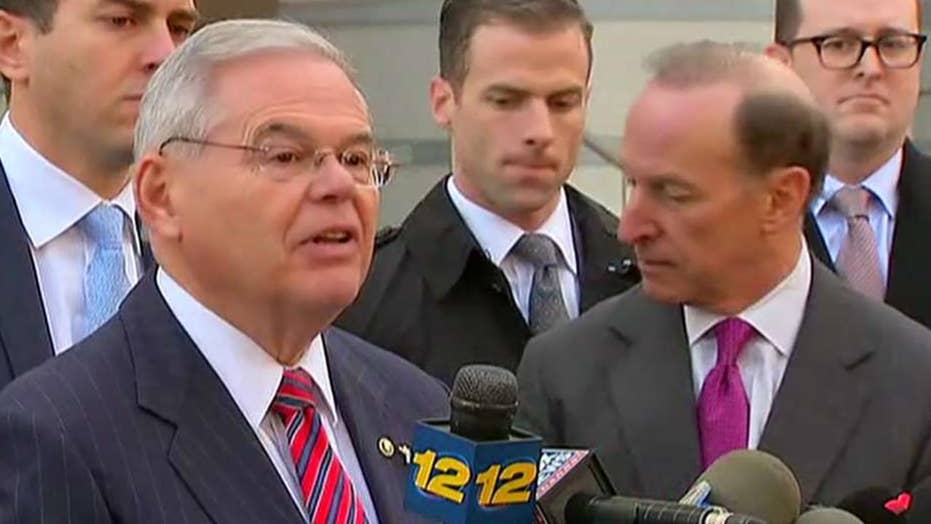 Democratic senator from New Jersey thanks his family, supporters, his legal team and the jury following mistrial in corruption trial.

New Jersey Democratic lawmaker Sen. Bob Menendez, who was brought up on bribery and corruption charges last year, kicked off his re-election campaign Wednesday in front of a cheering crowd at Union City High School.

“I am here because I am your vote,” Menendez told a gymnasium full of cheering high school students and Democratic lawmakers.

The senator came out swinging against President Trump, calling the commander in chief out on immigration and health care.

“Under (Trump’s) watch, health care is getting more expensive, environmental protections are being gutted, women’s rights are under attack,” Menendez said.

He added that he would fight for New Jersey residents against a president who “divides us, distracts us, but does not deliver for us.”

Democratic Gov. Phil Murphy praised Menendez as the state’s “indispensable senator” for his work on storm recovery after Superstorm Sandy as well as securing federal funds for a new Hudson River rail tunnel.

Fellow Democratic Sen. Cory Booker was the only one on hand to refer to Menendez’s recent troubles with the law.

“If you kick a lion when he’s down, you’d better be careful when he stands up,” Booker said.

The mistrial was seen as a major victory for Menendez and a blow to the Justice Department, whose efforts to go after politicians in recent years have not been terribly successful.

Outside the courthouse after the mistrial, an emotional Menendez made clear that he would be out for political vengeance.

"Certain elements of the FBI and of our state cannot stand, or even worse, accept that the Latino kid from Union City and Hudson County could grow up to be a United States senator and be honest," said the 63-year-old son of Cuban immigrants.

The mistrial brought an inconclusive end to the two-and-a-half month trial.

Senate Majority Leader Mitch McConnell has called on the Ethics Committee to investigate Menendez for possible violations of the public trust and the Senate code of conduct.

The case against Menendez marked the first time in almost a decade that a sitting U.S. senator faced a federal bribery charge.

According to the criminal complaint, Menendez greased wheels for Salomon Melgen, a Florida ophthalmologist.

Melgen, in turn,  paid for private jets, hotel rooms and forked over nearly $75,000 in campaign contributions to Menendez.

The defense argued that the gifts were not bribes, but tokens of friendship between two men who were "like brothers."