Meghan McCain called President Trump a "child" in the wake of a report suggested the USS John McCain had to be "out of sight" during Trump's recent visit to Japan.

Meghan McCain has opened fire on President Trump, as the ongoing family feud heated up again.

McCain took aim at the president after the Wall Street Journal reported on Wednesday night that an email sent to U.S. Navy and Air Force officials requested that the “USS John McCain needs to be out of sight" ahead of Trump's recent visit to Japan.

"Please confirm #3 will be satisfied," an official reportedly wrote, according to the Journal.

Trump denied knowing the White House ordered the naval vessel named to honor his political nemesis, tweeting that he was "not informed about anything having to do with the Navy Ship USS John S. McCain during my recent visit to Japan."

But before the president had been able to send his tweet, McCain had fired off one of her own.

"Trump is a child who will always be deeply threatened by the greatness of my dads incredible life," the co-host of "The View" tweeted. "There is a lot of criticism of how much I speak about my dad, but nine months since he passed, Trump won't let him RIP. So I have to stand up for him. It makes my grief unbearable."

Fox News contacted the White House for comment on the report.

The Journal reported, citing a photo, that a tarp had covered the ship's name before the president's trip. The paper also reported that after the tarp came down, a barge moved nearby, obscuring the name. However, the U.S. Navy's Seventh Fleet, Cmdr. Clay Doss, said: "The picture of the Tarp is from Friday and it was taken down on Saturday. Paint barge was also removed ahead of the visit. All ships remained in normal configuration during the President's visit." 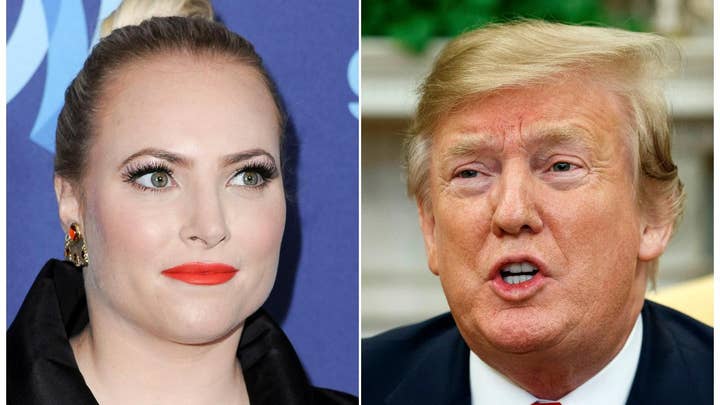 The president repeatedly has bashed the late-McCain long after his passing in August 2018, continuing to place blame on his "thumbs down" vote that derailed efforts to pass the "skinny repeal" of Obamacare. Trump has also declared he was "was never a fan" of the late-Senator.

Meghan McCain has frequently defender her father on Twitter and on "The View."