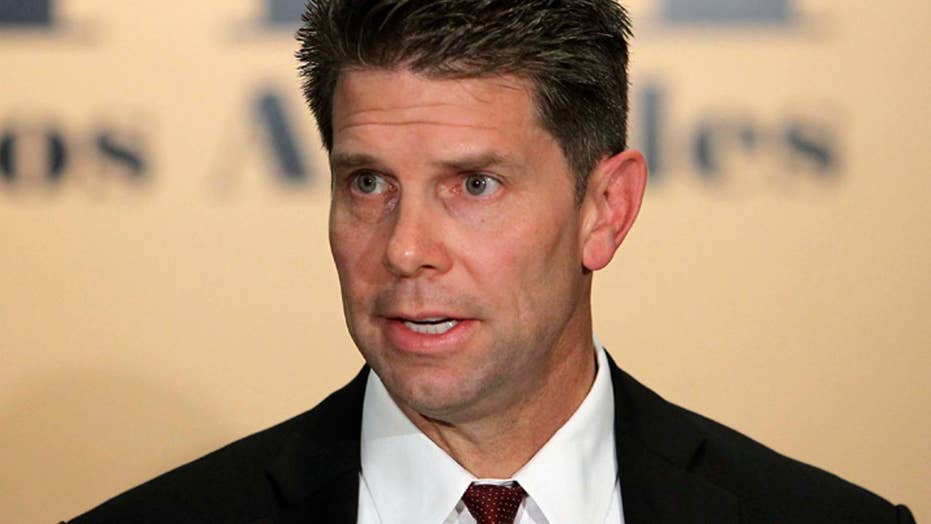 FBI's David Bowdich: Who is he?

The former SWAT team sniper, David Bowdich, was pegged to be the next acting FBI deputy director after the removal of Andrew McCabe. Who is he?

David Bowdich was named the FBI acting deputy director after Andrew McCabe abruptly stepped down on Jan. 29 -- just months before he was slated to retire.

McCabe’s departure comes amid President Trump’s continuous criticism of the former deputy director, who served with the FBI for 22 years.

The president also accused McCabe of bias because an FBI investigation into Hillary Clinton's private email server led to no criminal charges against her.

Additionally, Trump has publicly pressured FBI Director Christopher Wray to get rid of any officials who were confidants of James Comey, the former bureau head whom Trump fired last spring. But McCabe’s exit, Wray allegedly wrote in a message to FBI employees on Monday, was not a result of “political or other pressure,” The Associated Press reported.

In light of McCabe’s departure, here's what you should know about Bowdich, a former sniper who is now the bureau's new acting second-in-command.

Career prior to the FBI

Before joining the FBI, Bowdich attended New Mexico State and Georgetown Universities, where he received a bachelor's of science degree in criminal justice and a master’s in leadership, respectively.

Bowdich then worked as a police officer and detective in Albuquerque, N.M., for the city's police force. Bowdich's father, Joe, was a sheriff in Bernalillo County, according to the Albuquerque Journal.

His career with the FBI

Bowdich joined the FBI in 1995 as a special agent in the San Diego field office, according to the FBI's website. In that role, he investigated violent crimes and gangs. He also worked as a SWAT team operator and sniper.

It was during this time that Bowdich had one of his first significant successes as a FBI agent: After he led a yearlong wiretapping investigation, federal racketeering convictions were brought against gang members in Southern California for the first time.

In 2003, Bowdich was promoted and served in the Safe Streets and Gang Unit at the FBI headquarters in Washington. But he returned to San Diego two years later to lead a task force that investigated drug and racketeering cases against some of the nation’s most infamous gangs, such as the Bloods, Crips and Hells Angels, the Washington Post reported.

A few years later, in 2009, he oversaw non-white-collar crime investigations in San Diego. At that time, he created the first FBI squad to help spot kidnapping threats on either side of the U.S-Mexico border.

Bowdich next served as special agent in charge of the counterterrorism division at the Los Angeles field office before he became the assistant director in charge of the same office in 2014.

After the San Bernardino shooting in December 2015, Bowdich gained national attention when he led the FBI’s response to the attack. Before the shooting, Bowdich suspected that Southern California could be a potential target for a terror attack, according to an interview he gave to the Los Angeles Times.