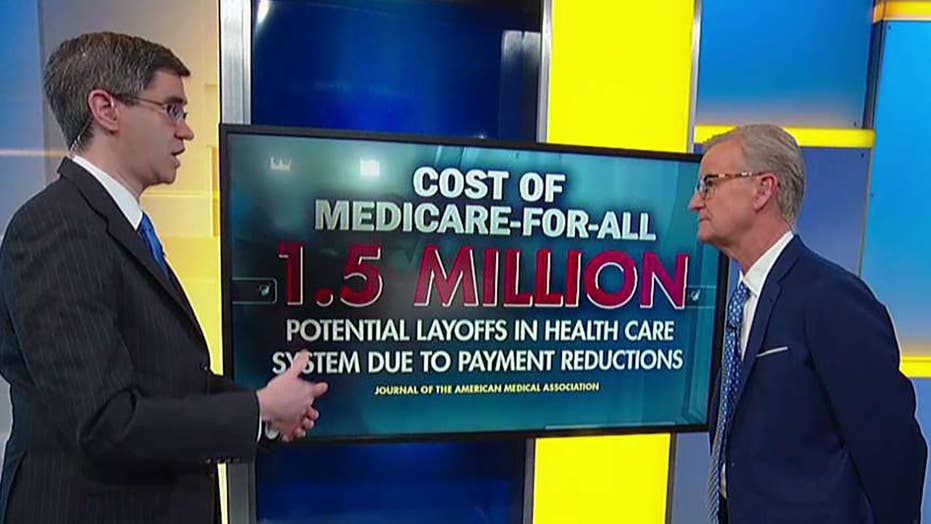 Chris Jacobs, CEO of Juniper Research Group and author of 'The Case Against Single Payer,' says the majority of Americans will pay more if Democrats have their way.

Chris Jacobs, the founder of a Washington D.C.-based policy consulting firm, warned on "Fox & Friends" on Wednesday a "Medicare-for-all" health care system would mean a spike in taxes for many Americans.

Under the system, supported by many Democrats, people would no longer pay for health care costs such as premiums, deductibles, and co-pays.

"The old saying is if you think health care is expensive now, just wait until it's 'free,'" Jacobs, the founder of Juniper Research Group, said. "You will end up paying for it in tax dollars and higher taxes and it will encourage people to overconsume healthcare."

Several independent studies of Medicare-for-all have estimated that it would dramatically increase government spending on health care.

Some Democratic 2020 hopefuls point to their support of Medicare-for-all to prove their progressive bona fides. But other Democrats have stated the plan is not politically or economically feasible because of the large tax increases required, preferring instead to stabilize the Affordable Care Act.

Jacobs said that as it is, 80 percent of hospitals lose money on their Medicare patients, a loss that is likely to intensify under a Medicare-for-all plan.

"If they don't have private insurance to cover the gap, they are going to cover hundreds of billions of dollars of losses," he said. "They are going to have to lay off workers. Do this in one full swoop, this would create a recession just on its own."