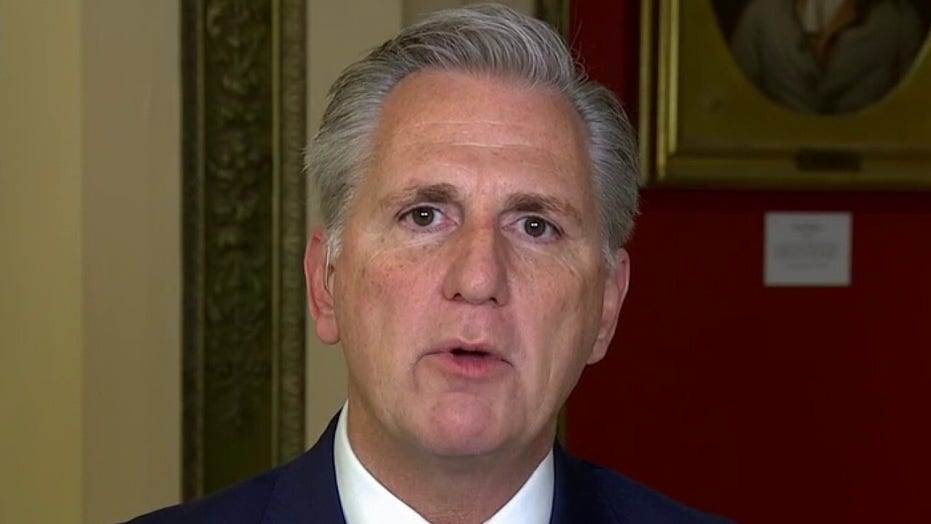 And McCarthy, of California, blasted the top Democrat, also from California, in tough terms for touting her side's wins in the final coronavirus bill, claiming the fundamentals actually were in place on Sunday and each day Democrats sought more concessions created additional hardship on real families.

"How many people were laid off as the Democrats fought to change the election law or implement the Green New Deal?" McCarthy charged Thursday in a press conference. The Green New Deal was never included in the House proposal, but it did include measures meant to curb airline emissions.

PELOSI HINTS AT WHAT DEMS COULD INCLUDE IN NEXT CORONAVIRUS BILL

McCarthy argued the plan could have been passed days sooner if Pelosi hadn't sought to change the bill. Senate Democrats rejected earlier versions of the package because they said it favored toward corporate bailouts over struggling workers.

A few minutes before McCarthy spoke, Pelosi boasted that Democrats had “won the day” in obtaining what they wanted from the Senate’s $2.2 trillion coronavirus response stimulus package, while hinting at other items she would like to see included in a forthcoming bill.

Pelosi described the negotiations as a “jiu-jitsu” moment in securing legislation that she described as worker-first instead of corporation-focused, but still said Democrats walked away with “not getting everything we want” out of the bill.

But McCarthy bristled at Pelosi's claim of legislative “jiu-jitsu.”

"That is an outright lie," he said.

"The fundamental portions of this bill [have] not changed since Sunday," McCarthy said, claiming Democrats tried to turn a crisis to their own political gain.

"The only few additions were funding of things that had nothing to do with the coronavirus. Was that worth holding it up?" McCarthy said, citing $25 million funding for the Kennedy Center in Washington D.C., down from the $35 million that House Democrats proposed.

McCarthy continued railing against Pelosi. "She spent time thanking her members on wins. America's suffering does not care to hear about these superficial and fabricated claims."

He added: "What Democrats did was a total disgrace. History will not be kind to the days that added to the millions who were unemployed."

The House will vote Friday and is expected to approve the massive legislation -- the biggest in U.S. history -- and send the bill to President Trump. Meanwhile, Pelosi was careful to stress that Democrats didn't get everything they wanted.

Among them are a “better definition of who qualifies for family and medical leave,” greater OSHA protection for workers, a proposal for pensions that Pelosi said Trump approved and Senate Majority Leader Mitch McConnell, R-Ky., said could be in the next bill, a 15 percent increase in food stamps, and additional funds for state and local governments.