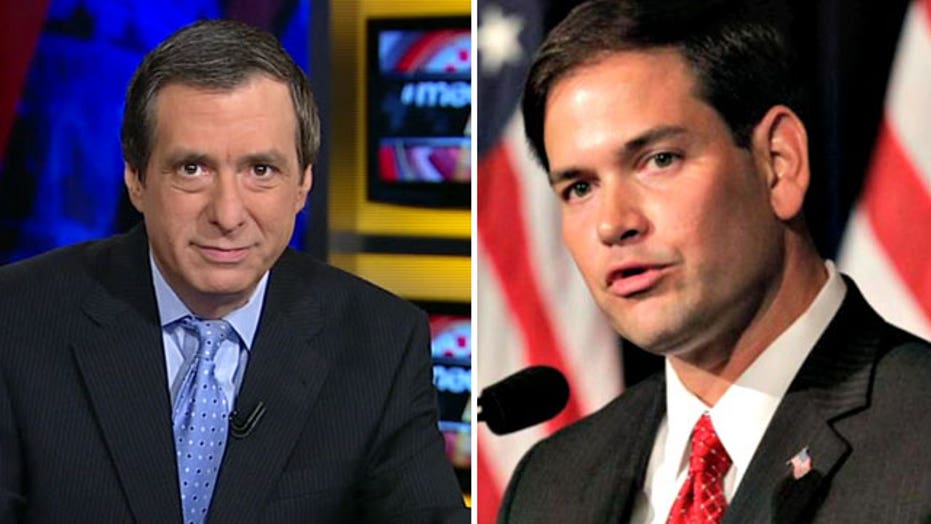 It’s too much to say that Marco Rubio is hot. He’s, well, warm. But how his temperature began rising is one of the mysteries of the media primary.

And now an investigative attempt to cool him off has fizzled, big time. The piece, by Politico, is just a head-scratcher.

I’ve profiled Rubio and always thought he had a lot of presidential potential. But with home-state rival Jeb Bush and Scott Walker grabbing most of the headlines, the Florida senator seemed relegated to some distant tier.

What exactly has Rubio done to merit this growing 2016 stature? Not much, actually. His campaign has remained below the radar, and I suppose you could say he hasn’t made any mistakes.

Yet through the magic of media alchemy, National Review conjured up a piece headlined “Insider Buzz Grows for Marco Rubio.” The conservative magazine quoted a GOP operative as saying “The Jeb boom is over and people are having second thoughts about Walker.”  Man, that was quick!

“The beneficiary in terms of buzz is Marco Rubio, who now has many of the party’s top donors looking at him in a way they weren’t even a month ago. Though Rubio hasn’t made as much noise as his competitors as the 2016 campaign has gotten underway in earnest, his knowledgeable presentations and obvious political talent are nonetheless turning heads or, at least, enough of them.”

The very next day, the Washington Post gave Rubio some establishment cred with this piece:

“Sen. Marco Rubio has been cultivating a relationship with Mitt Romney and his intimates, landing some of the 2012 Republican nominee’s top advisers and donors and persistently courting others as he readies an expected 2016 presidential campaign.

“In a crowded field of contenders, the imprimatur of Romney could help clear Rubio’s path into the top tier. Since Romney announced in January that he would not run for the White House again, he and Rubio have had at least two lengthy phone calls in which Romney encouraged and mentored the 43-year-old Florida senator about the political landscape, according to a Romney associate.”

Woo-hoo! Mitt likes the guy. That’s right, Mitt Romney, who was deterred from making a third presidential bid himself by all the negative press about what a terrible candidate he was.

Even Salon’s Digby took note that Marco could be a threat to Hillary:

“Rubio, as rough around the edges as he certainly is, is the one hopeful they can conceivably contrast with an older, white woman as a 'first' of equal importance. He’s young, he’s Hispanic and he’s good looking. He’s the anti-Hillary whom they believe might be able to siphon off enough of those Latinos who are going to be necessary to get the GOP over the line.”

And the Post wasn’t done. Monday came this piece: “Nobody Can Match Marco Rubio’s Upside.”

How’s that? An NBC/Wall Street Journal poll contained this nugget of good news: Some 56 percent of those Republicans surveyed said they could see supporting Rubio; 26 percent said they could not.

Walker was right behind, with 53 percent open to supporting him and 17 percent writing him off.

When you get to the percentage of those who can’t see supporting Jeb Bush (49), Rand Paul (49) and Mike Huckabee (52), you can see how Rubio, at the moment, is broadly acceptable to his party.

Not to throw cold water on the whole thing, but another way of looking at it is that many primary voters don’t know enough about Rubio to have disqualified him. He hasn’t been high enough on the radar to warrant many attacks.

But that changed Monday, when Politico dropped what was meant to be a bombshell: “Marco Rubio’s House of Horrors.”

It’s a well-reported story that didn't have the goods. Just left me underwhelmed.

When Rubio was coming up in Florida politics, he became friendly with David Rivera, described as a  “scandal-plagued former congressman under investigation in a federal campaign-finance probe.” Rivera helped him get elected to the Florida House 15 years ago, and they later shared a rental in D.C. for awhile.

Rivera has “weathered state and federal investigations into his finances, a related state ethics case that recently resulted in a proposed $58,000 fine, and the more serious campaign-finance scandal that erupted in 2012.”
‎
But here’s the thing: Those investigations have nothing to do with Rubio.

The only real connection now is that they bought a Tallahassee house to room together in 2005, paid too much for it, and the property faced foreclosure proceedings. They are now trying to sell it for $125,000, $10,000 less than what they paid for it.

Sorry, but I don’t see a there there. I get that Rivera now falls into the category of embarrassing associate, but he hasn’t been charged with anything. Nor is there any suggestion of improper dealings, not even a below-market loan, involving the so-called house of horrors.

If this is the worst “scandal” Rubio faces, he’s in good shape.

But there is this delicious quote: “‘This will be an issue,’ declared Craig Smith, a top adviser for the Ready for Hillary super PAC, echoing the views of many supporters and detractors alike. ‘When you run for president, voters and the press have an insatiable appetite for people’s histories, what they’ve done, who they are.’” Irony alert, anyone?

Out of ammunition, Politico also notes an embarrassing episode in which Rubio “double-billed taxpayers for flights paid for by a political group, in his case the Republican Party of Florida.” But this came to light five years ago, and the senator repaid the money.

As a poised and polished Hispanic from a swing state, Rubio has obvious advantages in a presidential race, along with the liability of having pushed a Senate immigration compromise that is decidedly unpopular within the GOP.

But the sudden “buzz” about Marco Rubio has nothing to do with any speech or proposal or maneuver by the freshman senator. It’s a media-created phenomenon. The good news for Rubio is that he’s now taken seriously enough to attract investigative reporters trying to knock him down.