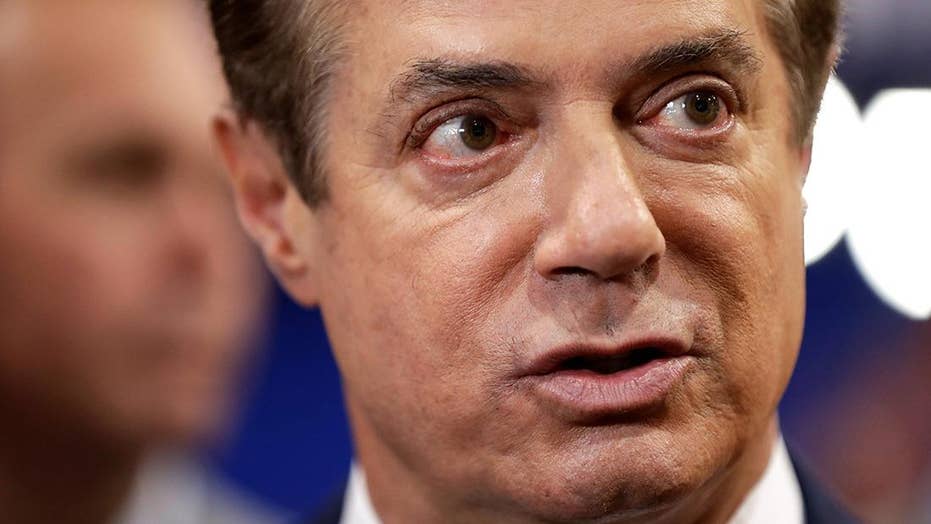 Why Manafort flipped and what's ahead for him

John Yoo says no one can blame Manafort for cutting a deal, should have done it earlier. Also, the former deputy assistant attorney general thinks the FBI will decide against pursuing the Kavanaugh accusation further.

Former Trump campaign chairman Paul Manafort appeared in court Friday in a wheelchair for a hearing to set his sentencing date, as lawyers claimed his terms of confinement were negatively affecting his health.

"I’m not willing to go on endlessly,” Ellis said, referring to the government’s preference for sentencing to occur after Manafort completes his cooperation with Special Counsel Robert Mueller’s investigation as part of a separate plea deal. “I do not extend sentencing in circumstances like this.”

But in a startling scene, Manafort, 69, was wheeled into the Alexandria courtroom Friday wearing a prison jumpsuit with “Alexandria inmate” emblazoned on the back.

Attorneys for Manafort, arguing the sentencing date should be set for as soon as possible, said the terms of Manafort’s current imprisonment are negatively affecting his health.

It was not immediately clear what health issues Manafort is facing. A source close to Manafort's defense told Fox News on Friday that Manafort's "five months of isolation" have contributed to his deteriorating health.

Manafort was convicted over the summer on eight counts of bank and tax fraud, as part of Mueller’s investigation into Russian meddling and potential collusion with Trump campaign associates during the 2016 presidential election. The jury, though, remained deadlocked 10 counts. Ellis on Friday dismissed those 10 charges, which were declared a mistrial and related to financial crimes.

Manafort faces a maximum sentence of 80 years in prison.

Last month, Manafort pleaded guilty to separate charges in his Washington, D.C., federal trial, and struck a plea agreement that involved cooperation with Mueller’s team to avoid a second trial.

As part of the agreement, Manafort forfeited multiple bank accounts and several properties in New York. However, he will keep his properties in Florida and Virginia where his family live.

The White House downplayed the agreement, saying last month that Manafort’s guilty plea has “nothing to do with President Trump or the Trump campaign.”