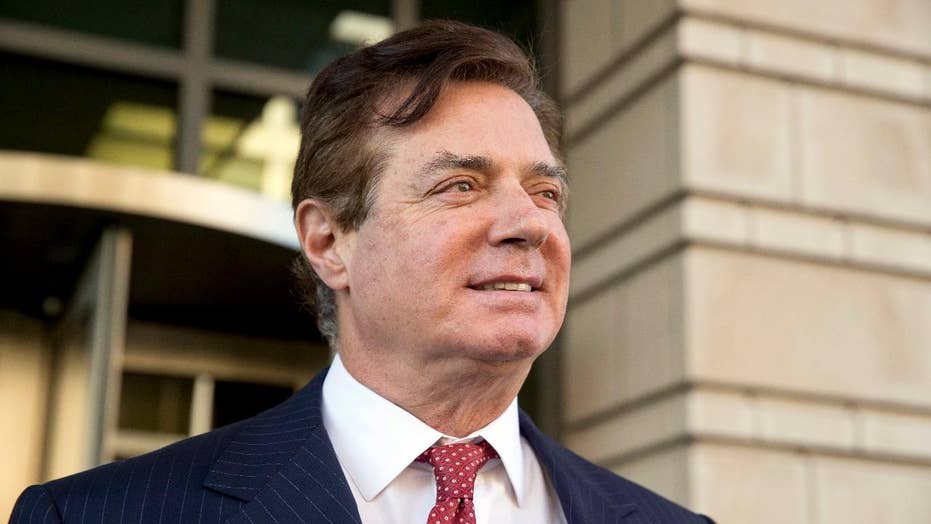 Paul Manafort’s legal team pushed back against Special Counsel Robert Mueller on Friday, after Mueller brought new obstruction charges against him in the Trump-Russia investigation.

The motion, released Friday, criticized Mueller's allegations that Manafort -- a former campaign manager for President Donald Trump -- had tampered with witness evidence, calling them a “dubious” plot intended to “corruptly persuade” Manafort’s former business associates to “perjure themselves at the upcoming trial in September.”

The filing also argued against any effort by Mueller to revoke or revise the conditions of Manafort's pretrial release from prison.

Manafort is currently under house arrest, awaiting trials scheduled for Virginia and Washington, D.C., later this year. He has denied accusations that he committed financial crimes, including failure to report earnings from overseas lobbying work.

Meanwhile, President Trump on Friday dismissed any talk of pardoning Manafort or his longtime personal attorney, Michael Cohen, who is under investigation by federal prosecutors in New York.

"They haven't been convicted of anything. There's nothing to pardon. It is far too early to be thinking about it," Trump told reporters.

The motion by Manafort's legal team maintained that Manafort's former “Hapsburg Group” did not do lobbying work for the United States and focused instead on “promoting the idea of a Ukraine that is closer to Europe than to Russia and to recognize the path toward electoral and economic reforms.”

The document played down the notion that an 84-second telephone call and a few text messages between Manafort and an unnamed associate – referred to as “Person A” – and two former business associates, was grounds for tampering with evidence.

The motion called Manafort's communication with associates “irrelevant, innocuous and unsupportive of the conjured witness tampering claim.” It also argued that Manafort's use of multiple phones shouldn’t be grounds for suspicions, pointing out that he often traveled to regions “where communications are routinely hacked.”

Even “major corporations (and the U.S. Government itself) preach caution in this regard,” the motion stated.

The motion argued that Manafort has fulfilled his pretrial obligations for the previous eight months and requested the Court “accept the recently submitted bail package as assuring his attendance,” in the upcoming September trial.