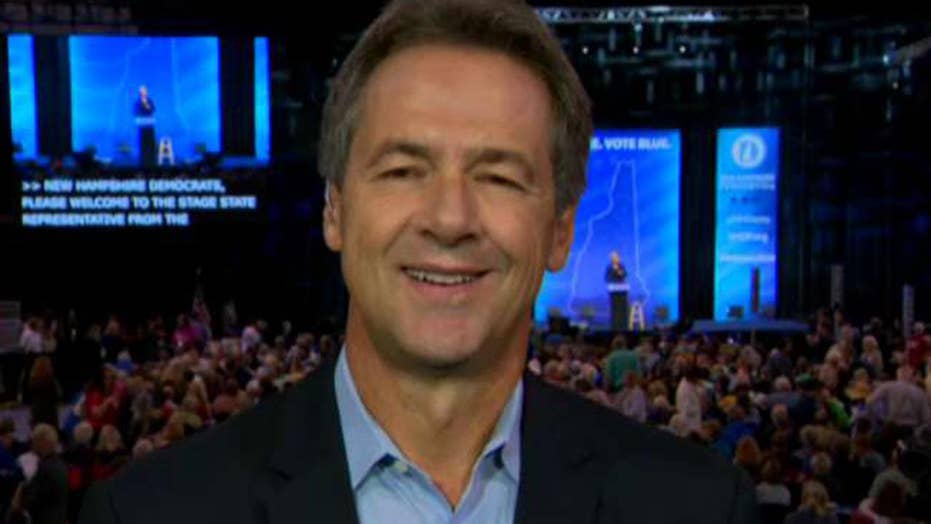 MANCHESTER, N.H. -- Two long-shot candidates for the Democratic presidential nomination who failed to make next week’s debate stage are taking aim at the showdowns.

“This won’t be decided by the debates. What I hear from folks time and time again is nothing meaningful came out of these debates and they’re often disconnected from peoples’ lives,” Montana Gov. Steve Bullock said Friday.

Bullock spoke with reporters from Fox News, NBC News, and NPR after headlining the "Politics and Eggs" speaking series, a must-stop for White House hopefuls in the first-in-the-nation presidential primary state of New Hampshire.

BULLOCK ACCUSES STEYER OF BUYING HIS WAY ONTO DEBATE STAGE

Bullock, who launched his campaign in the late spring, qualified for the second round of debates but didn’t reach the Democratic National Committee’s polling and fundraising criteria to make the cut for last month’s showdown or Tuesday’s debate, which will be held in Ohio.

The DNC’s raising the thresholds again for candidates to make the stage for November’s fifth round showdown, which will be held in Atlanta.

Colorado Sen. Michael Bennet is in a similar situation. He jumped into the race relatively late and qualified for the first two rounds of debates, but didn’t make the stage last month and won’t be in the debate spotlight next week.

“I had to make a decision on the debate stage, whether I was going to keep laundering money through Facebook to try to stay on a debate stage that was pre-season football, that wasn’t going to make a difference in the standings, or whether I was going to talk to voters directly in Iowa and New Hampshire,” Bennet explained in an interview on Tuesday with Fox News and NHTalkRadio.com.

“I decided I was going to talk to voters directly in Iowa and New Hampshire at a time when they were going to start paying attention to this race,” he emphasized.

Twelve candidates have qualified for Tuesday’s showdown. Bullock, Bennet, and four other contenders in the still extremely large but shrinking field of Democratic White House hopefuls failed to make the cut.

Most of the lower-tier candidates have fired away for months at the DNC for their debate criteria, arguing it’s unfair and winnows the field of candidates before voters in Iowa, New Hampshire, Nevada, and South Carolina – the first four states in the primary and caucus presidential nominating calendar, get to cast their ballots.

Democratic presidential candidate and Montana Gov. Steve Bullock mingles with the crowd after headlining the 'Politics and Eggs' speaking series, in Manchester, NH on Oct. 11, 2019

A slightly more diplomatic Bullock said on Thursday that “the DNC was well-intentioned but I don’t think the best example is for campaigns to be spending $50 or $60 to get each individual donor…. I don’t think that’s the best way to pick a candidate or nominee.”

Pushing back against the criticism, DNC Chair Tom Perez told Fox News last month that the process has been “eminently fair” and added “we’re going “to continue to be transparent.”

Rep. Tulsi Gabbard  - who failed to qualify for last month’s debate but made the stage for next week’s showdown - announced on Thursday that she may boycott next Tuesday’s debate.

The congresswoman from Hawaii accused the DNC and its national media debate partners of “rigging” the primary battle against many of the lower-tier candidates and political outsiders running for the nomination.

“I am seriously considering boycotting October 15 debate to bring attention to DNC/corporate media’s effort to rig 2020 primary,” she tweeted.

Even though he’s not making the stage, Bullock says he’s marching on. He told Fox News he has enough campaign cash to survive until the first votes in the early voting states in February.

“We’re still 120 days out from any voter expressing preference. I still think there’s a lot of time for this,” he stressed.

And Bennet took aim at the top-tier contenders for the nomination, such as former Vice President Joe Biden and Sens. Elizabeth Warren of Massachusetts and Bernie Sanders of Vermont.

“I think the support for the leaders in the race is very, very soft, maybe as soft as it’s ever been at this stage of the race,” he predicted. 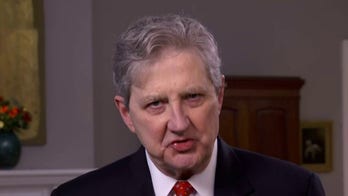