Sen. Bernie Sanders, I-Vt., entered the 2020 presidential race this week promising to transform America with a left-wing vision of economic and environmental justice. But the self-described democratic socialist’s high-end income, multiple houses and fondness for air travel have already opened him up to criticism that his lifestyle doesn't always match the rhetoric.

Sanders has pitched himself as a grassroots economic populist, focusing on income inequality and higher taxes for the rich.

OPINION: ODDS ARE BERNIE SANDERS WON'T BE OUR NEXT PRESIDENT -- BUT HE COULD KEEP TRUMP IN OFFICE FOR ANOTHER FOUR YEARS

"Our campaign is about transforming our country and creating a government based on the principles of economic, social, racial and environmental justice," he said.

"Together you and I and our 2016 campaign began the political revoution," he said. "Now it is time to complete that revolution and implement the vision that we fought for."

This single family house built on 1981 and located in Burlington, Vermont, is listed to Bernard and Jane Sanders. (Google Maps)

But Sanders has raised eyebrows over his spending and personal wealth. Notably, he owns three houses. In 2016, he bought a $575,000 four-bedroom lake-front home in his home state. This is in addition to a row house in Washington D.C., as well as a house in Burlington, Vermont.

“The Bern will keep his home in Burlington and use the new camp seasonally,” Vermont’s Seven Day’s reported in 2016.

Senator Bernie Sanders and his wife, Jane O'Meara, own this townhouse built in the late 1800s in the District of Columbia. It's a one bedroom, one and a half bath with a brick exterior (Google maps)

The multiple homes, though, bring into question past statements -- like when he asked in 2017: "How many yachts do billionaires need? How many cars do they need? Give us a break. You can't have it all."

VTDigger reported in May that he made more than $1 million in 2017 -- $885,767 of which came from cash advances and royalties for his book, “Our Revolution” on his failed 2016 presidential bid. It’s the second time he made roughly that amount, making more than a million in 2016 also.

Bernie Sanders acquired this waterfront vacation home in the Lake Champlain island community of North Hero, Vermont. The historic four-bedroom home was built in 1920, and sits on 1.1 acres of land. (Screen Shot trulia.com)

But conservatives have pointed to Sanders’ lifestyle as contradictory given his tax-the-rich mantras.

“That’s why they are called limousine liberals,” Americans for Tax Reform President Grover Norquist said on Fox Business Network's “The Evening Edit” on Tuesday. “You have enough money. You can imagine spending other people’s money as well.”

“His health care plan, he admits, costs $32 trillion. He wants an 8 percent across-the-board tax on peoples’ salaries, which is only $12 trillion—an 8 percent pay cut for everybody in order to pay for his health plan [and] it only pays for a third of it,” he said. “So you can imagine the endless number of tax increases and regulations that they are looking to put on.”

But other parts of his lifestyle are also drawing scrutiny, specifically when compared to his calls to limit environmental pollution and also to redistribute the wealth of the “millionaires and billionaires.”

In October, he spent nearly $300,000 on air travel so he could speak to audiences in nine battleground states before the November midterms. This from a candidate who has endorsed a Green New Deal that seeks to dramatically reduce (if not eliminate entirely) air travel. 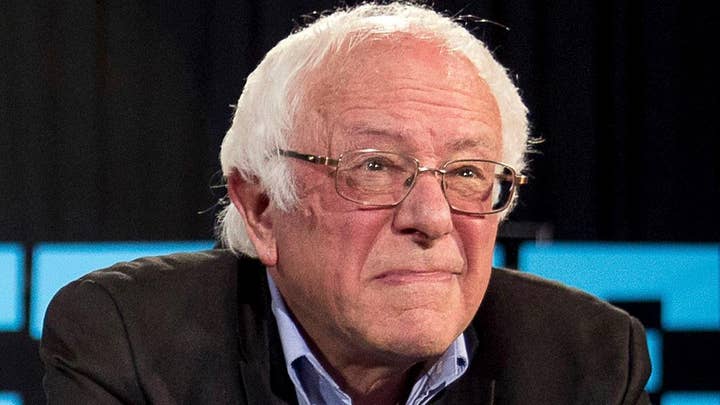 Sanders’ team reportedly purchased nearly $5,000 in carbon offsets to balance out the emissions produced from the travel, according to VTDigger. A carbon offset is a reduction in emissions to compensate for emissions elsewhere.

The same day his campaign paid the jet company, Sanders called climate change a "planetary crisis" in a tweet.

Since Sanders announced his presidential bid, he has received a fresh wave of criticism from conservatives, with commentator Charlie Kirk quipping: “For a committed socialist he sure seems to love living like a capitalist.”

Other parts of his family dealings will likely see more scrutiny also. The Wall Street Journal on Wednesday zeroed in again on the controversy surrounding Bernie’s wife, Jane Sanders, and her time as president of Burlington College.

The college closed in 2016, citing the enormous debt it accrued while Sanders was in charge -- in particular when the college made a $10 million real-estate deal. Federal investigators looked into whether Jane Sanders committed bank fraud by inflating the amount of money pledged to donors by the school --  but investigators purportedly closed the investigation and brought no charges.

Vermont Republicans have sought to tie the controversy to Bernie Sanders.

“If she’d been Jane Doe instead of Jane Sanders, she never would have gotten this loan, it never would have survived the most basic of underwriting," Vermont Republican Party Vice Chair Brady Toensing said on "Fox & Friends" Thursday.

In response to "Fox & Friends" request for comment, Bernie 2020 Senior Adviser Jeff Weaver said: "These false allegations began with a politically motivated complaint by Trump's 2016 Vermont Chairman. As Jane has said from the beginning she has done nothing wrong and pleased that the investigation came to an end months ago."

"It's no coincidence after Bernie Sanders' record breaking fundraising during the first day of his campaign, Fox News is regurgitating false attacks from Trump's cronies," he said.

But The Wall Street Journal claimed the saga, as well as reports that between 2009 and 2011 the school paid more than $328,000 to enroll students in a woodworking school run by Mrs. Sanders’ daughter, “shows financial incompetence and a tendency toward nepotism.”