Lifelong New Yorker Andy Maskin wants to become the governor of Kansas thanks to a loophole about residency requirements. (Fox News)

Andy Maskin has been to Kansas once – during a road trip several years ago when he and a friend saw the giant easel in Goodland on their way to the Great Plains.

But now the 40-year-old lifelong New Yorker is seeking to add his name to the growing list of long-shot candidates running for governor of Kansas.

Maskin told Fox News recently that he was inspired to run for the Sunflower State's gubernatorial seat after reading an article about the seven teenagers – none of whom are eligible to vote – who are also running.

“I thought that it was very interesting that they had discovered that there are no rules,” he said. “I read a couple more articles and I was just amazed. Really? None? That’s just fascinating. That is quite a loophole they just left.” 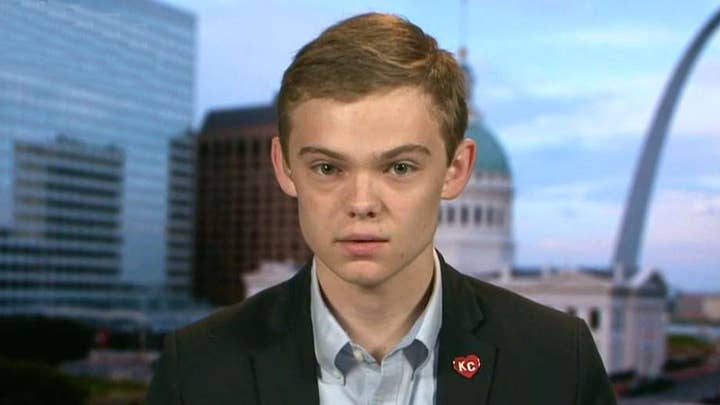 In Kansas, there are no minimum age restrictions to run for office and, as Maskin went on to discover, there are no residency requirements, either.

With this loophole in hand, Maskin launched his bid for governor earlier this month – despite living more than 1,200 miles away. His message: he is the ultimate “outsider” running for office in Topeka.

“An element of this that interests me is that everyone talks about being the ‘outsider’,” he said. “Everyone is ‘I’m not from Washington, I’m an outsider or I’m not from – insert state capital here – I’m outsider. Nobody campaigns and says ‘I’m an insider.’ The ‘outsider’ is kind of the key word.”

He continued: “I thought it would be interesting to see taking the ‘outsider’ thing to otherwise unattainable level once they close this loophole. If you truly want an outsider – I don’t know any Kanas politicians. I have no connection to lobbying groups. I come in tabula rasa.”

Maskin is not the only non-resident outsider running for governor. Ilan Cohen, 17, of Maryland, has never stepped foot in Kansas, but has thrown his name into the proverbial hat. Additionally, Nicholas Schrieber, a college student from Delaware, and Conner Shelton, a college student from Pennsylvania, are running as Independents.

In February, the Kansas House moved a bill out of committee that would require that candidates fit two criteria: be eligible to vote in the state and be a state resident for at least four years. However, the bill would not take effect until next January.

The gubernatorial election is set for Nov. 6, 2018. The current governor of Kansas is Jeff Colyer, who succeeded Sam Brownback on Jan. 31, 2018. Brownback resigned the governorship after the U.S. Congress confirmed him as President Trump's U.S. Ambassador-at-Large for International Religious Freedom in January.

Maskin said his campaign for governor will only include flying out to Kansas in May to file the paperwork with the Kansas Governmental Ethics Commission before heading back to New York.

“By then we will have raised the money – all the I’s will be dotted and the T’s will be crossed,” he said. “I can hand them everything on a silver platter.”

Maskin, who works in advertising in Manhattan and has never held any political office, now has to raise the $2,207 needed to get on the ballot. To do so, he has set up a website (www.AndyForKS.com) and an IndieGoGo account that will also double as a fundraiser to help an organization close to his heart: Cure SMA.

The non-profit organization focuses on finding a cure for spinal muscular atrophy, a rare neuromuscular disorder that is characterized by loss of motor neurons and progressive muscle wasting. It often leads to early death.

Maskin said one of his family members suffers from the disease and he hopes his campaign raises attention to it.

With a “neat” connection to New York, Maskin has targeted Greeley County as the electorate that he hopes to win.

Greeley County, located in the western part of Kansas, boasts a population of about 1,200 residents, with about 650 voting in the 2016 presidential election. It’s named after Horace Greeley, the founder and editor of the New-York Tribune, who famously encouraged western settlement with the motto “Go West, young man.”

“It’s about an hour and change from the nearest interstate. It is far. And you look at Google maps and it’s just this cute little town and they have a website with a video with the motto that says ‘Life as it should be,’” Maskin said. “And that really appealed to me because it’s so different from my way of life.”

He continued: “Clearly, running for governor for a state requires a whole big operation and all this other stuff that I don’t have and don’t plan on having. But maybe I can win Greeley County.”

Maskin acknowledged that he knows his campaign for governor is a longshot, but is intrigued to see how the idea of the ultimate outsider would appeal to the electorate in Kansas.

“I love my house – I wouldn’t want to sell my house here in New York. I love my job. My kids are growing up here. So it would be a tough call, but sure, if I won, I would figure something out,” he said. “Which isn’t to say that I am necessarily optimistic given that I have no resources in campaign other than the filing fee.”