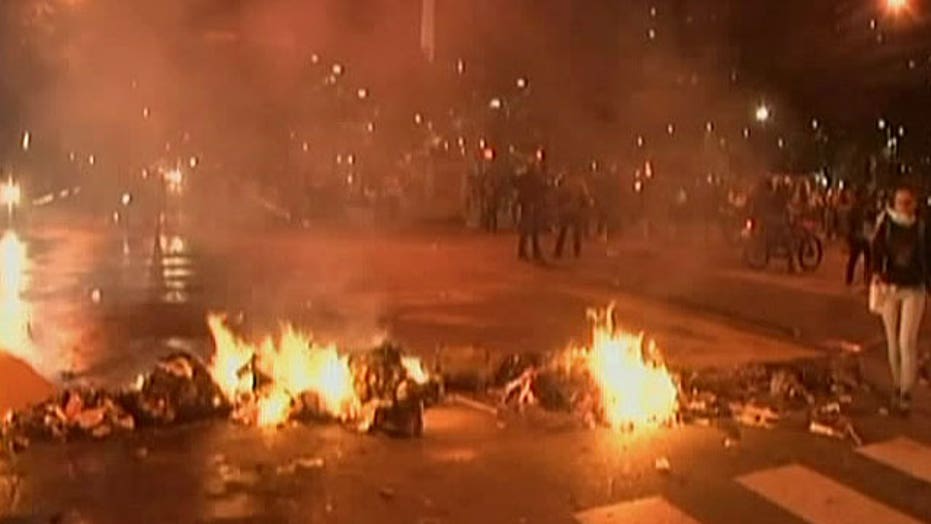 Is US ignoring crisis in Venezuela?

Members of Congress are calling on the Obama administration, and Latin American leaders, to escalate efforts to quell the violence and political unrest in Venezuela amid a bloody crackdown by the sitting government.

Sen. Marco Rubio, R-Fla., who has been unsparingly aggressive in his criticism of Venezuela President Nicolas Maduro, on Wednesday praised Panama for recent efforts to request a high-level meeting through the Organization of American States, which includes nations in North and South America. He said the OAS would consider that request on Thursday.

"President Obama has said that this is his year to use his pen and phone for action. Now, this is legitimately a time for President Obama to pick up his phone and encourage OAS member states to take part at Thursday's meeting and support Panama's request for a serious review of the Venezuelan government's actions against peaceful demonstrations," Rubio said in a statement.

The crackdown in Venezuela has already drawn in the Obama administration, though the White House stresses that the real dispute is between the Venezuelan government and its people.

After the Maduro government expelled three U.S. diplomats from Caracas on Feb. 17, saying they were supporting opposition plots to overthrow him, the U.S. reciprocated by expelling three Venezuelan diplomats.

"President Maduro needs to focus on addressing the legitimate grievances of the Venezuelan people through meaningful dialogue with them, not through dialogue with the United States," White House Press Secretary Jay Carney said. "Despite what the Venezuelan government would like to lead people to believe, this is not a U.S.-Venezuela issue. It is an issue between Venezuela and its people."

But the Obama administration also cited concerns about Venezuela's record on human rights and support for democracy.

Rubio and other lawmakers clearly want the U.S. government to take a harder line.

Rep. Ileana Ros-Lehtinen, R-Fla., is pushing a resolution that would voice support for Venezuelan protesters, condemn the crackdown and urged the OAS to work to end the violence.

"With at least over a dozen dead and more than 100 injured in countrywide protests against the Maduro regime, the United States has a moral obligation to take a clear stand in support of the Venezuelan people," she said in a statement. "I urge the Administration to keep the pressure on the leaders of Venezuela to end the violence and respect their citizens' dignity, and I urge my colleagues in Congress to support me in this fight."

This month, Venezuelan opponents of Maduro have been staging countrywide protests that the government says have left at least 15 people dead and wounded about 150. Authorities have detained 579 people, of whom 45, including nine police officers and members of the National Guard, remain in custody.

Unrest flared after the government jailed Leopoldo Lopez, a fierce critic of the sitting government.

Secretary of State John Kerry voiced concerns about the Venezuelan government's actions over the weekend, saying the government has "confronted peaceful protesters with force," while tightening restrictions on media and even revoking the credentials of reporters.

"This is not how democracies behave," he said.

State Department spokeswoman Jen Psaki said Tuesday that the U.S. urges Caracas to "step back from its efforts to stifle dissent through force and to respect basic human rights."

Meanwhile, Rep. Joe Garcia, D-Fla., wrote to Obama on Monday urging him to "employ all possible actions to assist Venezuelans" by granting asylum to those who have fled and ceasing deportations of other Venezuelans in the U.S.