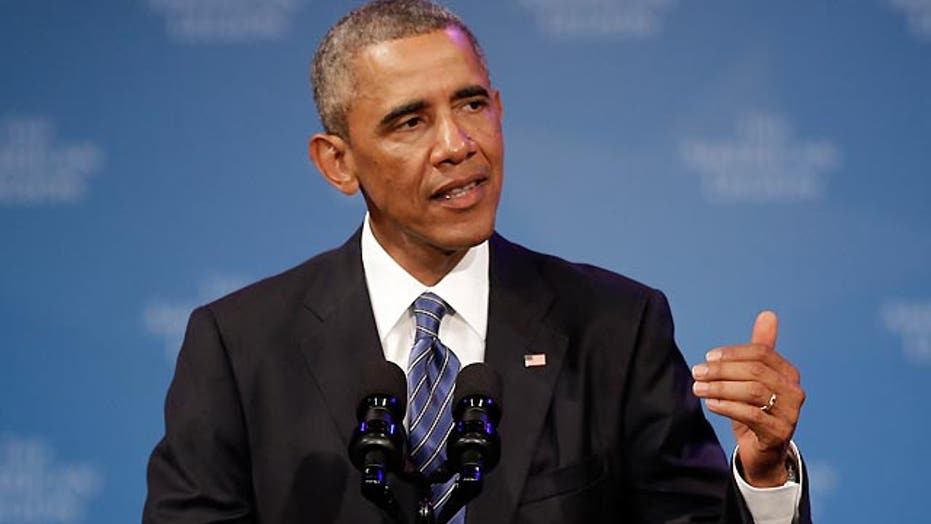 President Obama and military leaders are weighing a host of factors as they consider expanding airstrikes into Syria, including the Assad regime’s demand to seek permission first and warnings that the strikes could trigger ISIS retaliation.

But they soon could face another complication: Congress.

With Congress set to return early next month, influential lawmakers from both sides of the aisle have urged the administration to seek an up-or-down vote on military action in the region.

Sen. Tim Kaine, D-Va., issued a statement late Monday saying that while the Islamic State poses a “significant terrorist threat” to U.S. interests, “I do not believe that our expanded military operations against ISIL are covered under existing authorizations from Congress.”

Kaine noted that the president has the authority to defend against “imminent threats” to U.S. security interests but questioned whether current actions against the Islamic State “meet this test.” He called for a full-blown debate in Congress next month, in part to make sure lawmakers and the administration are united.

“This fight, and the threat posed by ISIL, is serious enough that Congress and the administration must be united on U.S. policy going forward,” Kaine said. “I urge the administration to use the next two weeks to clearly define the strategy and objectives of its mission against ISIL, then bring it to Congress for a debate and authorization vote.”

Though the executive and legislative branches have long battled over when the latter needs to be consulted for military action, Congress does have the power of the purse strings and could use that as leverage.

Sen. Rand Paul, R-Ky., and others have likewise urged the president to seek a vote.

The argument is that prior congressional authorizations do not give the president the power he needs to truly launch a campaign against the Islamic State, should he expand the targeted airstrikes into something broader. That is still under consideration, but in one sign of the administration's thinking, State Department spokeswoman Jen Psaki indicated Tuesday that the threat from the organization has increased.

"ISIS has threatened the homeland, and we take those threats seriously," she said.

The top Republican on the Senate Foreign Relations Committee Bob Corker, R-Tenn., also said in an interview with MSNBC on Tuesday that Congress should be asked to authorize airstrikes on Islamic State targets in Syria.

Corker noted the War Powers Act allows the Obama administration 60 days for military activity without coming back to Congress. But he agreed with Kaine in arguing against relying on the 2001 authorization.

“I hope what they will instead do is come to Congress and ask for a new authorization for a new threat that has evolved over time,” Corker said.

Corker, like many of his Republican colleagues, says that in order to make a difference, the U.S. strategy will have to be more involved than the current drone strikes in northern Iraq, and expand into Syria, though he says the administration is playing coy. “I've checked in several times over the last several days. And unusually, I haven't heard back,” he said.

The more the administration seeks to expand its military mission in the region, the more lawmakers are likely to demand a say.

The military still is weighing whether to expand airstrikes into Syria. The president over the weekend authorized surveillance flights over Syria as part of an initial intelligence-gathering effort.

Speaking Tuesday at an American Legion convention in North Carolina, Obama cautioned that “rooting out a cancer like ISIL won’t be easy, and it won’t be quick.”

At the White House, spokesman Josh Earnest noted the president so far has not made a decision to order additional military action in Syria – but will keep Congress apprised.

David Johnson, director at the Center for Advanced Defense Studies, said how long it takes for the administration to actually gather enough intelligence to make a decision depends on several factors. "It depends on the information gaps, the quality of surveillance, it depends on the quality of analysts looking at images," he said. "If they are scanning a broad area for threats, that makes things more difficult."

The administration could stop short of expanding airstrikes.

Among other ideas on the table are doing more to provide weapons, training and other assistance to Kurdish forces; more to help the Iraqi Army; and more to arm the Free Syrian Army.

Rep. Doug Collins, R-Ga., a member of the House Foreign Affairs Committee and an Iraq war veteran, said the next step, though, should be for the Obama administration to "outline to Congress exactly what they want to do."

He said the airstrikes need to be complemented by the Iraqis and Kurds on the ground, and said the president needs to present a plan, either in an address or meetings with Congress.

"For those looking at this situation, who have been in Iraq and have served in Iraq, the concern we have is we have seen a country fall apart. We left them," Collins told Fox News. "A terrorist organization that is more brutal than any we've seen has now taken over. And airstrikes ... will help, but they're not going to be the answer."