President Trump is beginning his 2020 re-election effort by trying to woo Hispanic voters with a kickoff event in the crucial swing state of Florida.

Vice President Mike Pence will visit Miami on Tuesday to roll out the "Latinos for Trump" campaign, a nationwide project aimed at engaging Hispanic communities. Florida is home to more 2 million Hispanic voters and could play a key role in next year's presidential election, Politico reported.

"The strong Latino support for President Trump and his policies will be instrumental in re-electing the president for a second term," Hannah Castillo, director of coalitions for the Trump campaign, told The Hill in a statement. 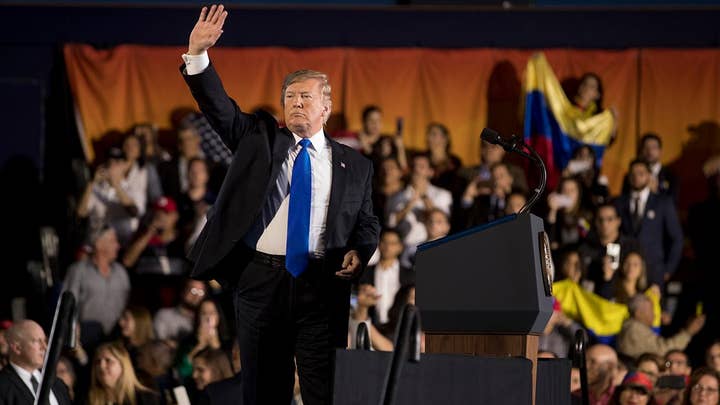 Trump won Florida in 2016 with 35 percent of the Hispanic vote, bolstered in part by pro-Republican Cubans, according to Politico.

More than two-thirds of non-Hispanic Cubans voted for Hillary Clinton, The central part of the state has seen an increase in Puerto Ricans -- who tend to support Democrats -- who've relocated from their traditional base in places like New York and from the island territory in the wake of a devastating blow by Hurricane Maria in 2017.

US MILITARY TO PROVIDE MEDICAL CARE, TRAINING TO PUERTO RICO

Trump's effort could face barriers. He's drawn criticism and scorn from many for his previous comments and policies that largely impact Hispanics.

During his 2016 campaign launch, he said Mexico was sending "rapists" and criminals across the border. He has referred to Central Americans fleeing violence and poverty as "thugs" and criminals.

On Monday, he tweeted that Immigration and Customs Enforcement (ICE) would be "removing the millions of illegal aliens who have illicitly found their way into the United States" next week.

His administration has drawn criticism for its response to Puerto Rico in the aftermath of Hurricane Maria. He squabbled with Puerto Rican officials and threatened to withhold aid from the island and has complained about having to do so regularly on Twitter.

He's also refused to acknowledge a Harvard study that concluded the death toll from the hurricane was closer to 4,600, more than 70 times the original number reported.

In an interview with Spanish-language network Telemundo slated to air Thursday night, Trump pushed back on assertions that a sizable majority of Hispanics fear his rhetoric and promises to deport millions of people.

"They want me to do it. They’re here illegally," Trump said.

"Mr. President, they do not,"  anchor José Díaz-Balart responded, while also telling Trump that MS-13 gang members do not make up the majority of migrants seeking to enter the U.S., a talking point Trump has continued to push.