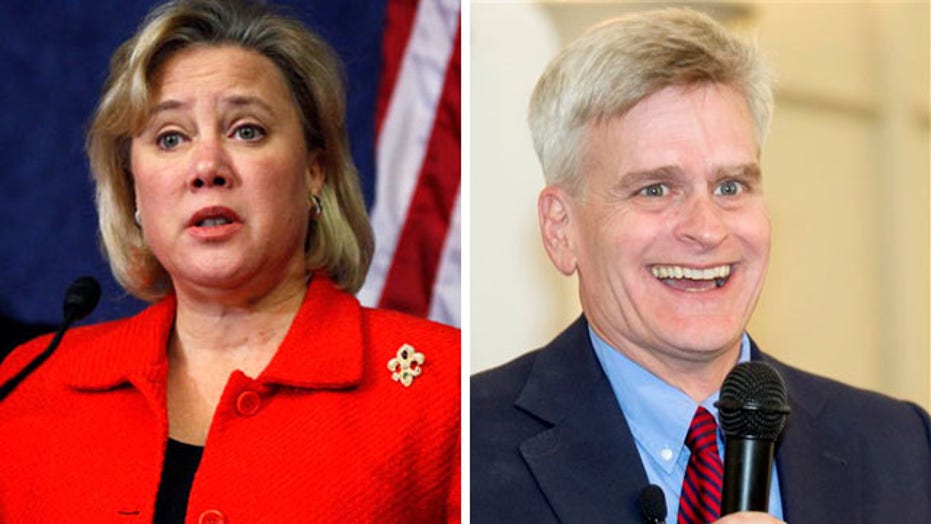 Will Louisiana Senate race go to a runoff election?

NEW ORLEANS – Will Democratic Sen. Mary Landrieu survive to serve a fourth term? Or will she fall victim to the changing political landscape in her home state and the fallout from a deeply unpopular president?

That’s the question voters will answer – if not on Election Day, then in a runoff a month later.

Certainly, Landrieu hopes the answer will be the former.

“What Washington really needs are people that can bust gridlock,” Landrieu told Fox News. “And I’ve proven that I can do that.”

Her main opponent, Republican Rep. Bill Cassidy, is doing everything he can to ensure it’s the latter.

“In our state, we are rejecting someone who supports Barack Obama 97 percent of the time,” Cassidy told Fox News. “Who would vote for ObamaCare again tomorrow if given the opportunity, and will support Senator Harry Reid, who does his best to kill oil and gas jobs.”

According to the latest poll, from NBC News/Marist, Landrieu would technically prevail in tomorrow’s so-called “jungle primary.” Unlike every other state, Louisiana holds its primary on Election Day. Marist has Landrieu leading the pack with 44 percent. Cassidy comes next at 36 percent, with fellow Republican Rob Maness pulling 16 percent of the vote.

But if no candidate cracks the 50 percent threshold, the top two vote-getters go head-to-head in a runoff on Dec. 6 -- that likely would be Landrieu and Cassidy. In that matchup, Maness’s votes go to Cassidy and according to Marist, Cassidy would win 50-45 percent.

Landrieu is a veteran of Louisiana’s colorful political environment. And she has played the runoff game before. In 1996, in her first Senate victory, she took the runoff by one-third of 1 percent. Six years later, she went to a runoff again and won by 3 percent.

But Louisiana has been changing. In 2002, 49 percent of white voters identified as Democrats. That number is now down to 32 percent. While the black population has increased, the rise is not enough to offset the decline in white Democratic voters.

Landrieu’s best hope to win is to turn out black voters in numbers closer to 2008 and 2012 than the last midterms. In what many Republicans saw as an effort to drive black voters to the polls, Landrieu suggested that one of the big reasons President Obama is unpopular in Louisiana is because of racism. Republicans, including both Cassidy and Maness, jumped on the comments as an insult to Louisiana voters. But in an interview with Fox News, Landrieu gave no quarter and insisted that while some people might not want to hear it, it’s true.

“African Americans have had a difficult time in the south,” Landrieu told Fox News. “You’ve read the statement. I don’t think anyone actually would disagree with it. Um, that was honest with themselves.”

At the same time, Landrieu is also urging voters to look past Obama and consider what her seniority can bring to Louisiana. She is the chairwoman of the Senate energy committee and has vowed to bring the Keystone XL Pipeline to a vote. However, she also supports Sen. Harry Reid as majority leader, and he has vowed that Keystone will never be voted on.

Cassidy is warning voters to not have the wool pulled over their eyes.

“When she says her first vote will be for Senator Harry Reid to be re-elected as Senate majority leader,” Cassidy told Fox News, “she’s really saying “I’m gonna vote for the fellow that will never allow this Senate floor vote to occur.”

While Landrieu spends the bulk of her time defending her record, she has lashed out at Cassidy, particularly over his support to raise the retirement age to 70 in order to preserve the solvency of Social Security and Medicare. Landrieu points out that the average life expectancy in some parts of Louisiana is 69 years, meaning most people would never have a chance to retire. Cassidy insists people would still be able to retire earlier, though he hasn’t fully explained how.

While Cassidy touts his conservative credentials, some Republicans aren’t sold. Baton Rouge native Tony Perkins of the Family Research Council is backing Rob Maness, who claims to be the real conservative in the race. Maness is also the choice of several Tea Party groups.

In an effort to win over Tea Party voters and improve his chances on Tuesday, Cassidy appeared over the weekend with conservative rock star Dr. Ben Carson. Carson implored Tea Party supporters to back Cassidy instead of Maness because Cassidy is in the better position to win.

Carson also took aim at Landrieu’s comments about lingering racism in Louisiana, describing her comments as “old fashioned” and “inflammatory.”

“I’ve been to Louisiana a lot of times,” Carson told Fox News with a chuckle, “and I feel nothing but love here. I don’t know what she’s talking about.”