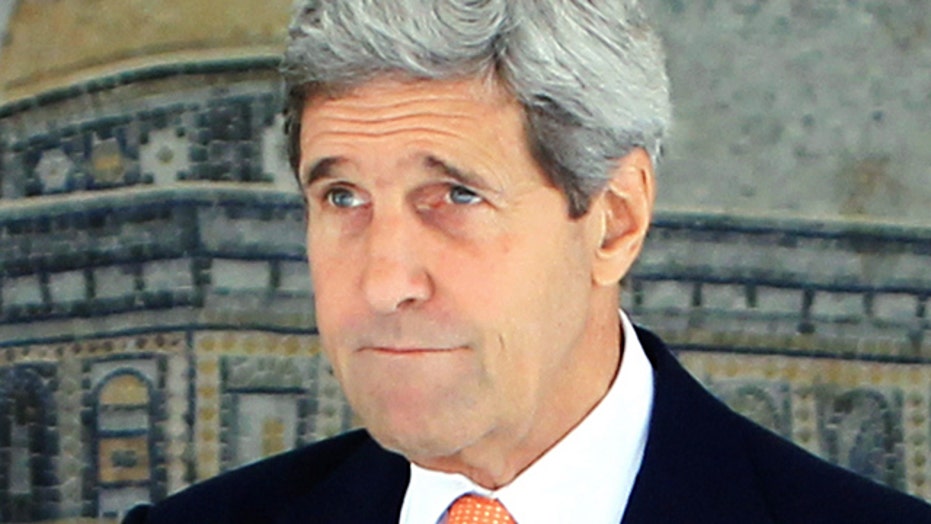 Secretary of State John Kerry landed in Israel Wednesday as part of his latest effort to broker an elusive truce between Israel and Hamas that would halt fighting in the Gaza Strip.

The secretary arrived in Tel Aviv despite a Federal Aviation Administration order temporarily halting commercial flights into the city -- a ban imposed after a Hamas rocket landed less than a mile from Ben-Gurion Airport.

He was to meet with Israeli Prime Minister Benjamin Netanyahu after earlier talks with Palestinian President Mahmoud Abbas and U.N. chief Ban Ki-moon, who is also in the region. But U.S. officials have downplayed expectations for an immediate, lasting truce.

In Jerusalem, Kerry said negotiations toward a Gaza cease-fire were making some progress as he met for a second time this week with Ban. "We certainly have made steps forward," Kerry said. "There's still work to be done."

"One of the results, one would hope, of a cease-fire would be some form of demilitarization so that this doesn't continue, doesn't repeat itself," Blinken said in an interview with NPR. "That needs to be the end result."

U.S. officials have downplayed expectations for an immediate, lasting truce between Israel and Hamas. At the least, Kerry's mission Wednesday sought to define the limits of what each side would accept in a potential cease-fire.

Kerry flew to Tel Aviv from Cairo, where he met Tuesday with Egypt's president and other high-level officials. Egypt has proposed a cease-fire plan that is backed by the U.S. and Israel but been rejected by Hamas. Egyptian Foreign Minister Sameh Shukri said Tuesday's talks were focused "to not only resolve this issue, but also to set in motion once again the peace process that Secretary Kerry has been so actively involved in so as to end this ongoing conflict between the Palestinians and the Israelis."

It's unlikely that Washington is ready to wade back into the morass of peace negotiations that broke off last April after nearly nine months of shuttle diplomacy by Kerry, who stopped short of advocating a new round of peace talks Tuesday. But the new round of fighting between Israel and Hamas militants who control Gaza has reached the level of violence that U.S. officials warned last spring would happen without an enduring truce.

Wednesday saw Israeli troops battling Hamas militants in southern Gaza.  Israel said five more of its soldiers have died in the conflict, bringing the military's death toll to 32, without providing further details. Two Israeli civilians have been killed in 15 days of fighting.

A Palestinian health official said eight Hamas fighters died in the ferocious battle near the town of Khan Younis, which had come under heavy tank shelling and drone strikes since early Wednesday. Gaza health officials have claimed that 680 Palestinians have died in the fighting, though it's unclear how many of them are civilians.

Hundreds of residents of eastern Khan Younis were seen fleeing their homes as the battle unfolded, flooding into the streets with what few belongings they could carry, many with children in tow. They said they were seeking shelter in nearby U.N. schools.

Israel also struck the Wafa hospital in Gaza City, which the military says houses a Hamas command center. Basman Ashi, the medical center's director, said all 97 patients and staff were evacuated following Israeli warnings and that no one was hurt in the attack.

Meanwhile, a foreign worker in Israel was killed when a rocket fired from the Gaza Strip landed near the southern Israeli city of Ashkelon on Wednesday, police spokeswoman Luba Samri said. She did not immediately know the worker's nationality.

And in Jerusalem, 30,000 people attended the funeral of Max Steinberg, a 24-year-old from the San Fernando Valley of southern California serving in the Israeli military. Steinberg was killed in an attack on an armored personnel carrier on Sunday.

"I spoke with him a day and a half ago," his mother, Evie Steinberg, told Israeli Channel 2 TV. "I said 'are you afraid?' He said 'no. I am afraid only for you.' He's a hero." Kerry offered "profound gratitude" for the large turnout.

Meanwhile, for the second day in a row, the Federal Aviation Administration prohibited all U.S. flights to Tel Aviv’s Ben Gurion International Airport. The announcement coincided with a series of flight cancellations from European airlines over security risks in the region.

A Hamas rocket exploded near the airport on Tuesday.

Palestinian militants have fired more than 2,000 rockets toward Israel, and several heading toward the area of the airport have been intercepted by Israel's Iron Dome defense system, but police spokeswoman Luba Samri said Tuesday's landing was the closest to the airport since fighting began on July 8.