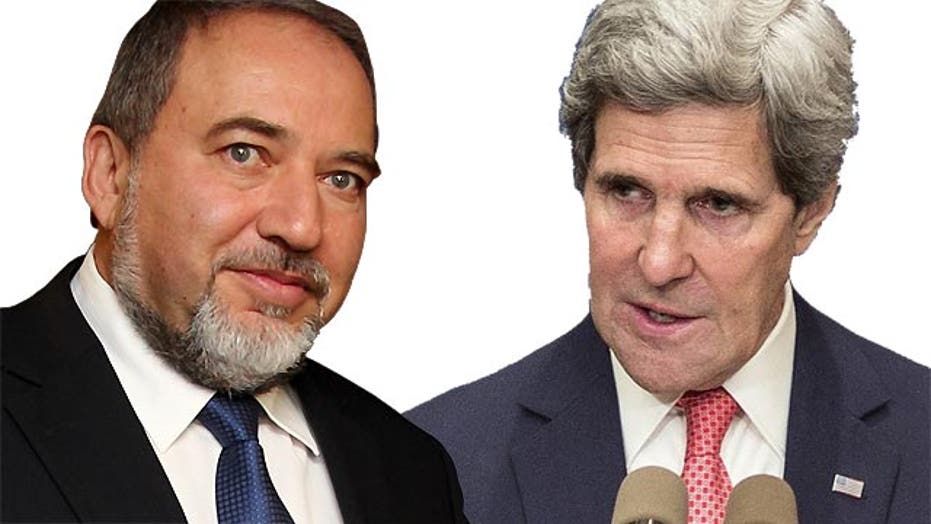 Only a year into his tenure as America’s top diplomat, Secretary of State John Kerry has made at least ten trips to the Mideast to broker an agreement between the Israelis and the Palestinians. He also has drawn two of the most pointed public barbs that Israeli officials have directed at an American secretary of state in decades.

Strategic Affairs Minister Yuval Steinitz told reporters in Jerusalem on Sunday that Kerry had said “hurtful…unfair…intolerable things,” and accused the secretary of trying to force the Jewish state to “negotiate with a gun to its head.”

Triggering Steinitz’s “gun” comment was one by Kerry at a security conference in Munich on Feb.1. He was explaining how deeply the desire for an Israeli-Palestinian accord is felt around the world before veering into speculation about the consequences that could befall Israel if such an accord is not secured - presumably under the auspices of Kerry’s own shuttle diplomacy.

“Everywhere I go in the world,” Kerry said in Munich, “wherever I go - I promise you, no exaggeration, the Far East, Africa, Latin America - one of the first questions out of the mouths of a foreign minister or a prime minister or a president is, ‘Can’t you guys do something to help bring an end to this conflict between Palestinians and Israelis?’”

In some parts of the world, such as Indonesia, Kerry suggested, the Israelis’ continued occupation of the West Bank helps extremist groups recruit jihadists.

“For Israel,” he went on, “there’s an increasing de-legitimization campaign that has been building up. People are very sensitive to it. There are talk of boycotts and other kinds of things. Are we all going to be better with all of that?”

Many Israelis interpreted Kerry’s comments as an implicit threat that he would support such measures against the Jewish state - despite the fact that Kerry has historically opposed boycotts against Israel.

At the State Department press briefing Feb. 3, spokesperson Jen Psaki said her boss found such interpretations “frustrating” because Kerry, while serving in the U.S. Senate for three decades, had amassed “a 100 percent voting record” in support of Israeli interests.

Israeli Prime Minister Benjamin Netanyahu has steered clear of criticizing Kerry directly. On Sunday, however, Netanyahu labeled any prospective boycott of Israel by international firms or governments "immoral and unjustified," and warned such actions would fail to achieve their goals.

The controversy over Kerry’s comments in Munich came after a similar diplomatic row last month. Israel’s defense minister, Moshe Ya’alon, was forced to issue an apology after Israeli media reported that he had accused Kerry of acting out of an “unfathomable obsession” and a misguided sense of himself as a Messiah-like figure.

Those comments drew a rebuke from the White House. “To question Secretary Kerry’s motives and distort his proposals,” Press Secretary Jay Carney said Jan. 14, “is not something we would expect from the defense minister of a close ally.”

Neither Kerry, Netanyahu nor Palestinian President Mahmoud Abbas has divulged the contents of the negotiations that have so preoccupied the American secretary of state. They say that to do so would prejudice the dialogue between the parties.

A well-placed source in Israel told Fox News the Israelis and Palestinians are essentially “fighting over words” in the draft of a framework agreement prepared by Kerry and his staff.