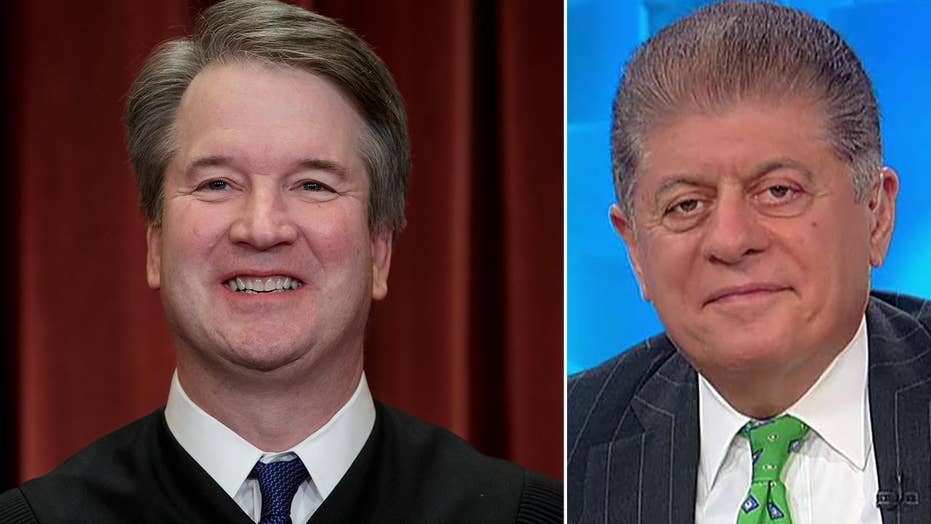 Does Kavanaugh have a case to sue The New York Times?

President Trump suggested this week that Supreme Court Justice Brett Kavanaugh sue The New York Times for libel after they published a report on alleged sexual misconduct that initially omitted key information that undermined the claim -- but whether this would be a good idea legally is up for debate.

The Times ignited calls from Democratic presidential candidates for Kavanaugh's impeachment after publishing the report over the weekend. Then late Sunday, the paper published a major revision noting the initial version did not reveal that friends of the alleged victim said she did not recall the episode.

That omission could be enough for a libel suit, according to one legal analyst. However, such a lawsuit also could open the door to more testimony from defense witnesses and would place the burden on him to prove the story was false -- essentially meaning he would have to prove his innocence.

"He does not want to sue the New York Times," Fox News senior judicial analyst Judge Andrew Napolitano told "Fox & Friends" Tuesday morning. "That's going to open up a Pandora's box for him."

That being said, Kavanaugh could still have a chance to win if he did sue. In order to prove a libel case, he would have to show that the Times story was false, damaging and, because he is a public figure, meets the higher standard of "actual malice" -- meaning they either knew it was false or displayed a reckless disregard for whether it was true. While that normally is a difficult hurdle to overcome, Napolitano said the Times' actions could be enough.

"Is leaving out of the article the true statement that the victim does not recall this alleged event reckless disregard for the truth? He may actually have a case there," Napolitano said.

Attorney Robert Barnes, who is representing students from Covington Catholic High School in a defamation case against lawmakers and journalists, had a similar assessment of a hypothetical Kavanaugh lawsuit.

"Yes, he would have a case against the Times, due to their knowing exclusion of a particularly pertinent contextual, exculpatory fact," Barnes told Fox News. "That said, it is rarely a good idea for a Supreme Court Justice to sue over this kind of matter."

UCLA Law Professor Eugene Volokh was less optimistic about Kavanaugh's chances against the Times, telling Law&Crime.com that the case would be a "loser" because he does not believe Kavanaugh could prove actual malice.

Volokh also told the outlet that it would be a bad idea for Kavanaugh to keep the media's attention on this.

"This too shall pass as all news stories do," Volokh said.

Cornell Law Professor Michael Dorf agreed, saying Kavanaugh would likely want the story out of the news. He also said "such a case would almost certainly be unwise," since it would give the Times the opportunity to seek discovery materials that they could try to use against Kavanaugh.

For the time being, though, the story remains in the headlines as some Democrats try to pressure congressional leaders to launch impeachment proceedings against him.

Senate Republican leaders, in turn, have vowed to defend Kavanaugh from such efforts.