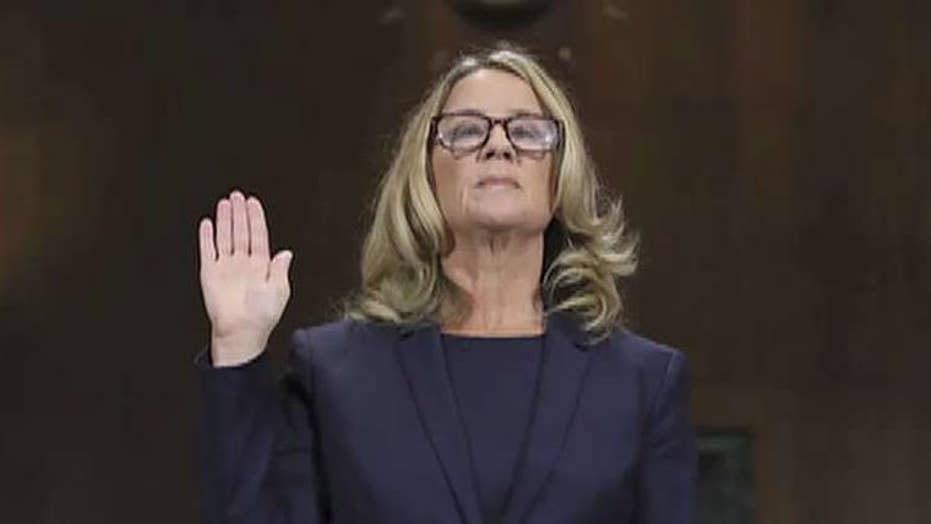 New video raises questions about Kavanaugh accuser's testimony; reaction and analysis from the ladies' night panel on 'The Story.'

President Trump said Supreme Court Associate Justice Brett Kavanaugh should sue or get backing from the Department of Justice, after a New York Times piece claimed that new accounts support one claim of alleged sexual misconduct from when Kavanaugh was in college.

Times reporters Robin Pogrebin and Kate Kelly stated in a piece published Saturday that well before Kavanaugh became a federal judge "at least seven people" had heard about how Kavanaugh allegedly exposed himself to Deborah Ramirez at a party. The report also included a new allegation that Kavanaugh similarly thrust his penis at an unwilling woman at an alcohol-fueled college party. The president defended Kavanaugh, whom he nominated to the court in 2018.

"Now the Radical Left Democrats and their Partner, the LameStream Media, are after Brett Kavanaugh again, talking loudly of their favorite word, impeachment," Trump tweeted Sunday morning. "He is an innocent man who has been treated HORRIBLY. Such lies about him. They want to scare him into turning Liberal!"

Kavanaugh, predicted by Democrats during his confirmation process to be a hardline conservative, often sided with liberal justices during the Supreme Court's last term. Trump accused the media of trying to influence him. He also went on to say that Kavanaugh should go on the offensive, taking on the media for false statements.

"Brett Kavanaugh should start suing people for libel, or the Justice Department should come to his rescue. The lies being told about him are unbelievable. False Accusations without recrimination. When does it stop? They are trying to influence his opinions. Can’t let that happen!"

Ramirez was one of several women who had accused Kavanaugh of sexual misconduct during his confirmation process. Dr. Christine Blasey Ford testified that Kavanaugh attempted to sexually assault her at a party when they were teens. Her attorney, Debra Katz, was quoted in a new book as saying that Ford was motivated to come forward in part by a desire to tag Kavanaugh's reputation with an "asterisk" before he could start ruling on abortion-related cases.

“In the aftermath of these hearings, I believe that Christine’s testimony brought about more good than the harm misogynist Republicans caused by allowing Kavanaugh on the court,” Katz said. “He will always have an asterisk next to his name. When he takes a scalpel to Roe v. Wade, we will know who he is, we know his character, and we know what motivates him, and that is important.

"It is important that we know, and that is part of what motivated Christine.”