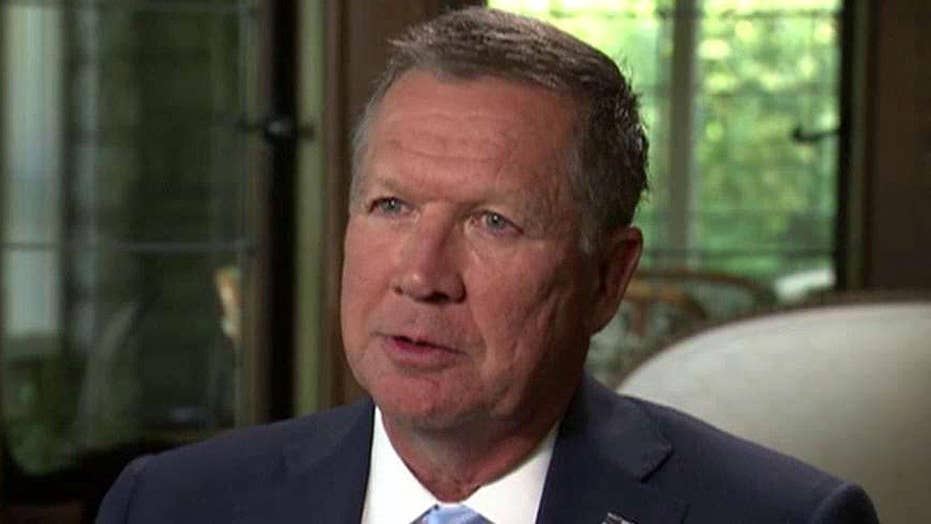 Kasich: 'Divider' Trump is trending the wrong way with me

'America's Newsroom' Exclusive: Ohio governor says presumptive GOP nominee needs to make a 'dramatic change' to get his endorsement, says there was 'never a chance' he'd join the ticket

The former presidential candidate, who suspended his campaign last month, made clear he still has deep reservations about the brash billionaire businessman – and that he feels no special obligation to come around just because the Party is coming to his town.

“We’re like two companies, you know, we have a different vision, a different value system and a different objective. … The divisiveness, the division, the name-calling, it just doesn’t go down well with me.”

Kasich revealed that he and Trump did speak about two weeks ago. He said the “ball is in his court.”

But he categorically ruled out being Trump’s running mate.

It’s unclear whether Kasich is even under consideration, though Trump told Bloomberg Politics in a piece published Wednesday he’s narrowed his short-list down to about four or five people. Trump reportedly said that list includes former rivals, and at least one who has not endorsed him.

Trump did not name names.

Kasich is hardly the only prominent GOP figure still reluctant to get behind Trump. Texas Sen. Ted Cruz also hasn’t done so since suspending his presidential campaign – and a steady procession of GOP figures, even those who have endorsed Trump, have condemned his recent claims that a federal judge weighing a Trump University case has a conflict of interest due to his Mexican heritage.

He also challenged Trump on policy, including his stated reluctance to take on certain entitlements.

“Are you kidding me? Of course, we have to deal with entitlements,” Kasich said.

Despite these comments, Kasich said he’ll still give Trump a chance, speculating, “He can change.”

He added: “I'm not going to endorse Hillary Clinton, that's for sure.”

Meanwhile, Trump has tried to move past the internal party tensions over his presumptive nomination. His staff was meeting Thursday in Washington with congressional members and aides. As the final GOP primaries were held Tuesday, he also issued a lengthy written statement explaining and defending his comments on the federal judge, in a bid to put the controversy behind him.

And at least one senior Washington lawmaker, Sen. Charles Grassley, R-Iowa, backed him up – while causing some controversy for himself in the process. According to The Des Moines Register, Grassley likened Trump’s comments to Supreme Court Justice Sonia Sotomayor once touting the judgment of a “wise Latina.”

“I think that you don’t have any more trouble with what Trump said than when Sotomayor said that — when she was found saying in speeches that, quote, ‘A wise Latina woman with the richness of her experience would more often than not reach a better conclusion than a white male,’” he reportedly said. “I don’t hear any criticism of that sort of comment by a justice of the Supreme Court.”