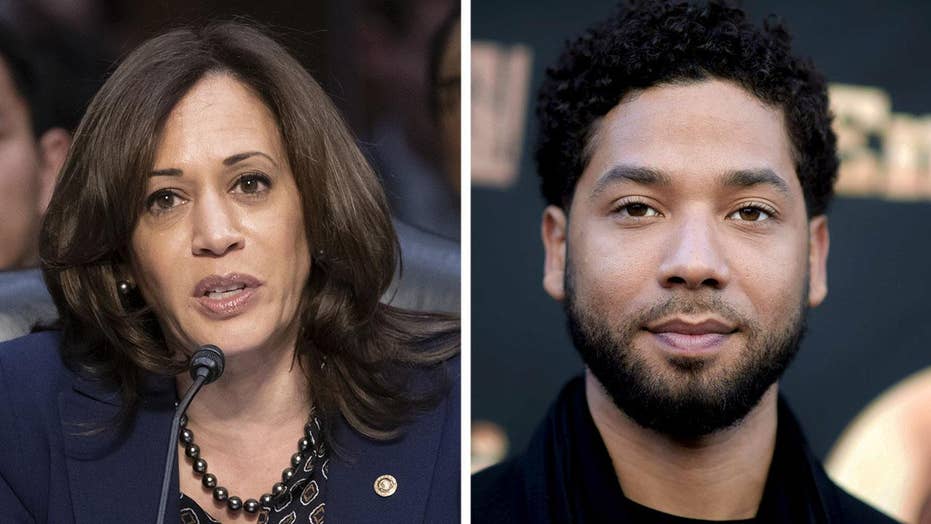 They say hindsight is 20/20. And that’s certainly the case for some Democratic presidential hopefuls as twists continue to emerge in the case of the alleged attack on actor Jussie Smollett.

When initial reports of the alleged incident surfaced three weeks ago, the actor said he was viciously attacked on the streets of Chicago. Reports stated that Smollett said there were two perpetrators, each wearing "Make America Great Again" hats and shouting "This is MAGA country" during the alleged assault. Smollett later refuted he made such a claim to police during an interview with "Good Morning America."

Kamala Harris, considered the early front-runner among declared candidates, was quick to condemn the alleged attack.

“.@JussieSmollett is one of the kindest, most gentle human beings I know. I’m praying for his quick recovery,” Harris tweeted on January 29.

“This was an attempted modern day lynching. No one should have to fear for their life because of their sexuality or color of their skin. We must confront this hate.”

However, the California Dem was caught off guard Monday when asked about the latest developments in the case that has seen Chicago police pour cold water on Smollett’s more explosive claims.

During an appearance at a bookstore in Concord, N.H., a female reporter asked the senator from California if she wanted to amend a tweet from Jan. 29, in which she said Smollett was the victim of "an attempted modern day lynching" and called the actor "one of the kindest, most gentle human beings I know." Harris also has used the Smollett attack to push legislation that would make lynching a federal hate crime.

"OK, so, I will say this about that case," she said. "I think that the facts are still unfolding, and, um, I’m very, um, concerned about obviously, the initial, um, allegation that he made about what might have happened.

Cory Booker also slammed the perpetrators of a crime the “Empire” star claimed was fueled by racial and anti-LGBT prejudice.

“To those in Congress who don't feel the urgency to pass our Anti-Lynching bill designating lynching as a federal hate crime – I urge you to pay attention.”

Booker, when asked about it again on Sunday, told reporters he would "withhold" judgment on the matter "until all the information actually comes out from on-the-record sources."

Other 2020 Dems forced to walk back strong early criticisms include Sen. Kirsten Gillibrand, D-N.Y., who initially responded to reports by calling it a “sickening and outrageous attack.”

“This is a sickening and outrageous attack, and horribly, it's the latest of too many hate crimes against LGBTQ people and people of color. We are all responsible for condemning this behavior and every person who enables or normalizes it. Praying for Jussie and his family,” she tweeted on January 29.

And while not a 2020 candidate, Democrat House Speaker Nancy Pelosi was also forced to backpedal on Monday, deleting a sympathetic tweet she posted on January 29.

“The racist, homophobic attack on @JussieSmollett is an affront to our humanity. No one should be attacked for who they are or whom they love. I pray that Jussie has a speedy recovery & that justice is served. May we all commit to ending this hate once & for all,” Pelosi wrote at the time.

The change in tune came after a Chicago police spokesperson said over the weekend the "trajectory of the investigation" shifted and they no longer consider Smollett a victim in the case.

Meanwhile, Smollett's attorneys, Todd S. Pugh and Victor P. Henderson, are vehemently denying that the attack was a hoax.

"As a victim of a hate crime who has cooperated with the police investigation, Jussie Smollett is angered and devastated by recent reports that the perpetrators are individuals he is familiar with,” the lawyers said in a weekend statement. “He has now been further victimized by claims attributed to these alleged perpetrators that Jussie played a role in his own attack. Nothing is further from the truth and anyone claiming otherwise is lying."