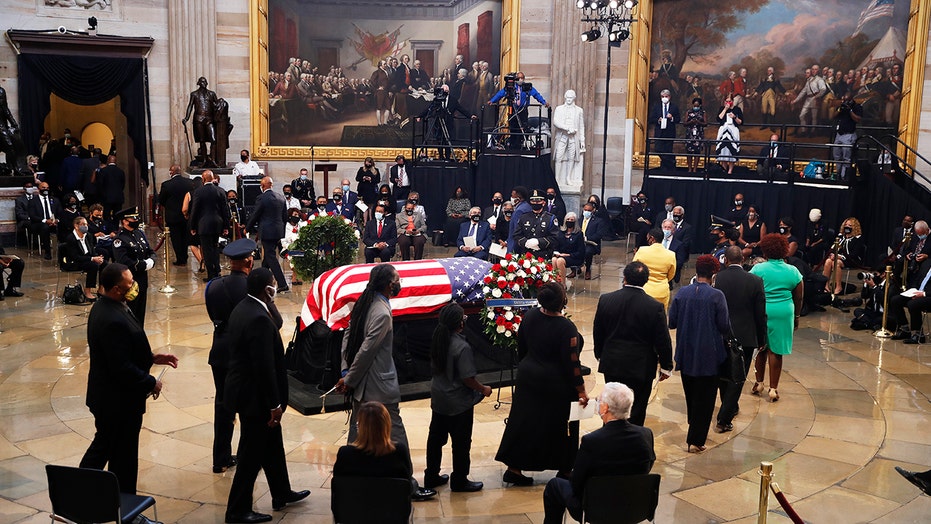 Rep. John Lewis lies in state at the US Capitol Rotunda for public viewing

The funeral for late congressman and civil rights icon John Lewis will take place at 11 a.m. Thursday at Ebenezer Baptist Church in Atlanta, Ga. -- the church where Martin Luther King, Jr., was baptized and served as a pastor and where his funeral was held after his 1968 assassination.

Lewis, D-Ga., this week was lying in state at the U.S. Capitol for three days as part of a six-day celebration of his life planned by his family. The celebration included a processional over the Edmund Pettus Bridge, where he was beaten in 1965 as he led a group marching from Selma, Ala., to Montgomery, Ala., protesting obstacles to Black peoples' right to vote.

Lewis also was honored at the Alabama state Capitol and his casket was driven past the Lincoln Memorial in Washington, D.C., where he was the youngest speaker at the 1963 March on Washington -- the event where King, Jr., made his "I Have a Dream" speech.

In this March 17, 1965, file photo, Dr. Martin Luther King Jr., fourth from left, foreground, locks arms with his aides as he leads a march of several thousand to the courthouse in Montgomery, Ala. From left are: an unidentified woman, Rev. Ralph Abernathy, James Foreman, King, Jesse Douglas Sr., and John Lewis. Lewis, who carried the struggle against racial discrimination from Southern battlegrounds of the 1960s to the halls of Congress, died Friday, July 17, 2020. (AP Photo/File)

When Lewis was 15, he heard King’s sermons on WRMA, a radio station in Montgomery, Ala., he recalled in an interview for the Southern Oral History Program.

King was “the person who, more than any other, continued to influence my life, who made me who I was,” Lewis wrote in his 1998 autobiography, “Walking with the Wind."

Lewis was the son of Alabama sharecroppers and engaged in decades of activism before being elected to Congress in 1987 and living to see Obama's inauguration in 2009.

"When we were organizing voter-registration drives, going on the Freedom Rides, sitting in, coming here to Washington for the first time, getting arrested, going to jail, being beaten, I never thought — I never dreamed — of the possibility that an African American would one day be elected president of the United States,” Lewis wrote shortly before Obama assumed office.

In this Feb. 15, 2011, file photo, President Barack Obama presents a 2010 Presidential Medal of Freedom to U.S. Rep. John Lewis, D-Ga., during a ceremony in the East Room of the White House in Washington. Lewis, who carried the struggle against racial discrimination from Southern battlegrounds of the 1960s to the halls of Congress, died Friday, July 17, 2020. (AP Photo/Carolyn Kaster, File)

House Speaker Nancy Pelosi, D-Calif., also will speak at the Lewis funeral Thursday, as will King Jr.'s daughter Bernice King. President Trump and former President Jimmy Carter will not be in attendance.

Lewis' body will be taken from the Georgia state Capitol to Ebenezer Baptist Thursday morning before a motorcade from the church to South-View Cemetery, which will be Lewis' final resting place. According to its website, South-View Cemetery was founded after the end of the Civil War by former slaves and inters the bodies of more than 80,000 African Americans.

King, Jr., and Dr. Benjamin Mays, another high-profile civil rights leader, were both initially buried at South-View before being moved, the South-View website says. And Lt. Henry O. Flipper, the "Buffalo Soldier" who was the first Black man to graduate from West Point, was also at South-View for a time before his military honors were posthumously returned and he was moved to a military cemetery. According to the Atlanta Journal-Constitution, Martin Luther King Sr., is still buried at South-View.