Presidential candidate and former Vice President Joe Biden has embraced a tough-talking, "no malarkey" style on the campaign trail -- telling it like it is in a way uncharacteristic for a lifelong politician.

But that attitude has led to a handful of tense clashes with voters and reporters who challenge him on certain issues that culminated in a viral Tuesday showdown with a worker at a Fiat Chrysler auto plant in Detroit.

Here are some of Biden's most explosive moments tangling with voters this election cycle.

Jerry Wayne (L) is the worker Biden got into an argument with at the Fiat Chrysler plant in Detroit Tuesday.

DID JOE BIDEN CALL AN IOWA VOTER 'FAT' DURING A HEATED EXCHANGE? TWITTER SURE THINKS SO

At a Dec. 5 town hall in Iowa, one voter came after Biden on two issues: his age and his son Hunter's previous job for a Ukrainian energy firm that the Obama administration considered to be corrupt.

"You’re a damn liar, man. That’s not true and no one has ever said that," Biden said in response to the comments about his son.

When the voter questioned his age, Biden responded, "Look, the reason I’m running is because I’ve been around a long time and I know more than most people and I can get things done. And you want to check my shape? Let's do push-ups together man, let's run, let's do whatever you wanna do."

But it was another comment that Biden made which became the subject of near-endless jokes on Twitter.

"Look, fat, look, here's the deal," Biden seemed to tell the man before he interrupted the former vice president and accused him of not having any more backbone than President Trump.

"Any other questions?" Biden then asked, walking away from the voter as he turned to the rest of the audience.

The Biden campaign has denied he called the voter fat, and says he instead meant to say, "look, facts."

At a New Hampshire town hall in early February, Biden took a college student to task for fibbing about whether she had participated in a caucus before.

The student, Madison, of Mercer University in Georgia, asked Biden how he could remain competitive in the Democratic presidential race after a disappointing result in Iowa.

"It's a good question. Number one: Iowa's a Democratic caucus. You ever been to a caucus?" Biden asked, as the student appeared to indicate that she had. "No you haven't. No you haven't. You're a lying, dog-faced pony soldier. You said you were; but now you got to be honest. I'm gonna be honest with you. It was a little bit confusing in Iowa."

Biden had previously called a voter a "lying, dog-faced pony soldier" in response to a question about President Obama's broken promise that individuals would be guaranteed the option to keep their doctors under the Affordable Care Act.

At a 2018 campaign event, Biden offered some hints as to the origin of the unusual phrase, saying it's from a John Wayne movie. This has led to mixed reports about the origin. However, in the 1949 John Wayne film "She Wore a Yellow Ribbon," a narrator at the end of the film does say part of the phrase Biden uttered: “dog-faced soldiers."

Go vote for someone else

Just days before his confrontation with the college student in New Hampshire, Biden had told a high-profile activist in Iowa to "go vote for someone else" in a tense discussion that began to border on a physical confrontation.

"I'm going to support you if you win the nomination because we've got to get rid of Trump. What are we going to do about climate change?" asked Ed Fallon, a former state legislator and current liberal activist in Iowa. “Now you say you’re against pipelines but then you want to replace these gas lines... We have got to stop building and replacing pipelines."

"No no no... go vote for someone else,” Biden responded, putting his hand on Fallon's chest. "You’re not going to vote for me in the primary."

The discussion got tenser from there, with Fallon telling Biden that he would vote for him in the general "if you treat me right" while Biden poked him in the chest and grabbed his jacket.

The exchange was eventually broken up by a Biden staffer.

In perhaps his most intense dispute to date, Biden told a worker at a Fiat Chrysler auto plant in Detroit that he was "full of sh--" and not to be "such a horse's a--" in front of a large crowd of other workers and reporters.

The worker accused Biden of trying to curb Second-Amendment rights, to which Biden responded, "You’re full of sh-- ... I support the Second Amendment." 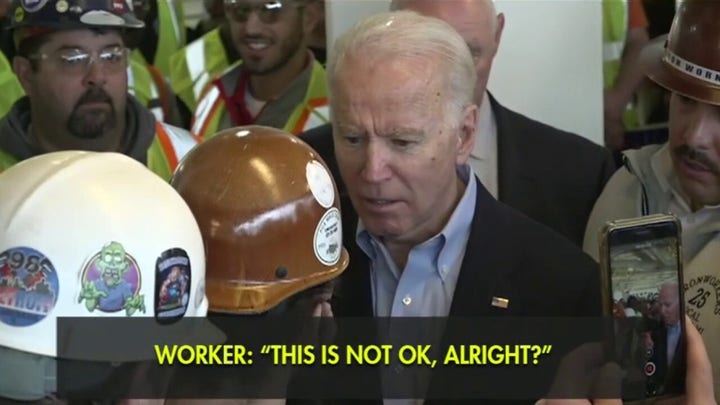 The worker then told Biden, "You're working for me, man," and told Biden that he saw an online video supporting his claim on Biden's gun stance.

Biden, pointing at the individual as they were mere inches apart in the middle of a crowd, said he's not working for him and told him not to be "such a horse's a--."

Kate Bedingfield, Biden’s deputy campaign manager, cited the candidate’s “no malarkey” approach as she defended his conduct in the encounter in Michigan.

“He is not going to take somebody distorting his record,” she told Fox News’ “America’s Newsroom” on Wednesday.