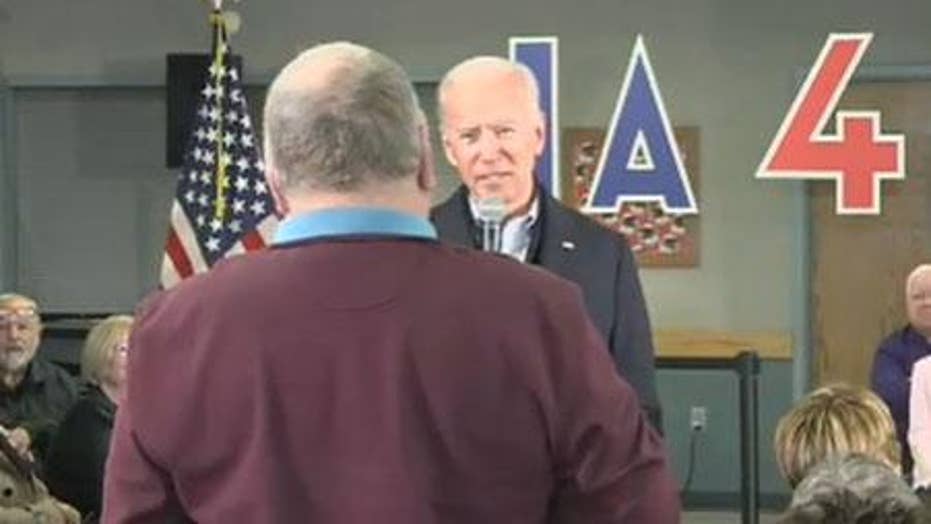 Joe Biden didn't like an Iowa voter questioning him about getting Hunter Biden a job in Ukraine, so he challenged him to pushups. Ford O'Connell weighs in.

Democratic presidential candidate Joe Biden lashed out at a man on Thursday during an Iowa town hall, challenging him to an IQ test and calling him a liar. But many observers think the former vice president may have also mocked the man’s weight.

At one point during the heated confrontation that occurred when a voter asked about Hunter Biden's payments from a Ukrainian gas company, Joe Biden appeared to begin calling the man “fat” before catching himself.

When Biden said the word in question, a group of schoolchildren off-camera gasped, thinking the former VP did, indeed, call the man “fat”.

“Look, fat, look, here’s the deal,” Biden appears to have said near the end of the exchange, prompting the voter to tell Biden he lacks a backbone.

His campaign claims he said he didn't say “fat,” just “facts.” And, later in the day, when asked if he used the word “fat,” Biden responded, “No, I didn’t.”

During the fiery altercation, Biden unequivocally referred to the voter as “Jack” and a “damn liar” and challenged him to a pushup contest.

A spokesperson for the Biden campaign directed Fox News to advisor Symone Sanders' tweet when asked for clarity.

"To be clear: Any assertion VP Biden said a word about the gentleman's appearance is making this something it is not," Sanders said. "In the latter part of the exchange, the VP began to say 'Look, facts' then said 'here's the deal.' If you've been to a Biden event, you've heard this before."

Social media pundits, however, quickly ditched the nuance and decided that Biden called the man "fat," and took to Twitter to express their opinions.

The encounter began when the audience member described the former vice president’s age and his son Hunter as his chief concerns with the presidential candidate.

“I’m not a Republican,” the man said. “I’ve got two problems with you. One is you’re damn near as old as I am. You’re too old. I’m 83 and I know damn well I don’t have the mental faculties I did [inaudible]."

The man in the audience went on to the topic of Ukraine -- specifically, the lucrative job Biden's son Hunter held with natural gas firm Burisma Holdings during the Obama administration. Impeachment proceedings in Washington are focusing on Trump's effort to pressure Kiev to look into the elder Biden's role removing a prosecutor who had been looking into the firm.

“But on the other hand, you sent your son over there to get a job and work for a gas company where he had no experience. ... In order to get access for the president … You’re selling access to the president just like he was,” the man said.

Someone appeared to attempt to take the microphone away from the man in the audience, but Biden stopped them, saying, “Let him go.”

Biden then challenged the man to a pushup contest and the exchange escalated until the controversial comment that critics on Twitter felt was a jab at the man’s weight.