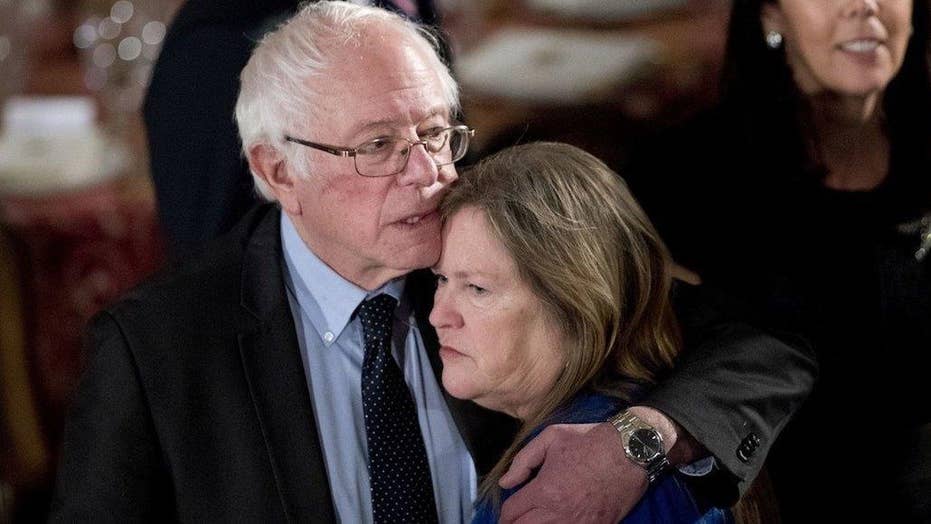 Inside the investigation of Bernie Sanders's wife

Sen. Bernie Sanders' wife is under investigation for allegedly making fraudulent claims while trying to secure financing for the college she once led. Attorney Brady Toensing wrote the letter that sparked the probe, and he talks to #Tucker

A federal probe into allegations that Sen. Bernie Sanders’ wife fraudulently obtained a nearly $10 million loan for a land expansion at a Vermont college has intensified, with prosecutors reportedly calling a state official to testify before a grand jury.

The federal investigation is focused on actions by Jane Sanders in 2010, when she was president of Burlington College.

At the time, she sought a multi-million dollar loan for a new campus on 33 acres along Lake Champlain. Sanders reportedly told college trustees and bank lenders that the college had millions of dollars in donations that could be used to repay the loan.

But The Washington Post reported Monday that trustees said they discovered many of the donors had not agreed to the amounts or the timing of donations listed in materials Mrs. Sanders provided.

This Feb. 22, 2015 photo shows a building on the campus of Burlington College in Burlington, Vt. The college, formerly headed by Jane Sanders, wife of presidential candidate Bernie Sanders, announced Monday, May 16, 2016, it is closing. The school has been struggling under the weight of its $10 million purchase of property and buildings during from the Roman Catholic Diocese of Burlington that it made during her presidency. (AP Photo/Wilson Ring) (AP)

She had sought a $6.5 million loan from People’s United Bank to buy tax-exempt bonds issued by a state agency, and a $3.65 million second mortgage from the Roman Catholic Dioceses of Burlington.

In order to secure the money, Sanders submitted a spreadsheet that attempted to show appropriate parties that the school had $2.4 million in confirmed pledges, grants, and other funds to repay the debt.

FILE--In this July 28, 2016 file photo, Sen. Bernie Sanders, I-Vt. and his wife Jane walk through downtown in Philadelphia during the final day of the Democratic National Convention. Sanders and his wife Jane O'Meara Sanders have hired lawyers in the face of federal investigations into the finances of the now-defunct Burlington College, which closed last year due, many feel, to debts incurred when Jane Sanders entered into an ill-advised real estate deal. (AP Photo/John Minchillo, File) (AP)

But a complaint raising questions about these pledges was first filed in January 2016 by the law firm of diGenova and Toensing. Partner Brady Toensing, a former Donald Trump presidential campaign official, wrote the complaint.

His involvement has led Sen. Sanders to blast the probe and scrutiny as a "pathetic" and political attack.

But Toensing, vice chairman of the Vermont Republican Party, last week made allegations similar to those detailed in the latest Post report.

“In order to get those loans, she had to confirm guaranteed donations of $2.6 million,” Toensing said on “Tucker Carlson Tonight” last Thursday. “Of that $2.6 million, the school was only able to collect about 25 percent…and of the confirmed donations, three of the donors have come forward to say that the school overstated their pledge amounts.”

Toensing said that the Catholic Church and Vermont taxpayers were “harmed” in the alleged collection of funding.

Government investigators reportedly suggested that the investigation is focused solely on Jane Sanders and the alleged bank fraud, and not on the independent Vermont senator.

Sanders spokesman Jeff Weaver denied the allegations, and confirmed that Jane Sanders hired a law firm in the spring in an effort to thwart any efforts by the Trump Justice Department to use the investigation as a way to block a potential 2020 opponent.

“While the Obama administration was in office, I don’t think anyone thought that these baseless allegations warranted hiring a lawyer,” Weaver told The Post. “But with Trump and [Attorney General] Jeff Sessions at the helm, that’s a very different situation.”

Last week, Sen. Sanders told CNN that his wife was “perhaps the most honest person I know.”

“Sadly we are in a moment where parties not only attack public officials, they have to go after wives and children,” Sanders said on CNN. “You know, this is pathetic and the way politics is in America today.”