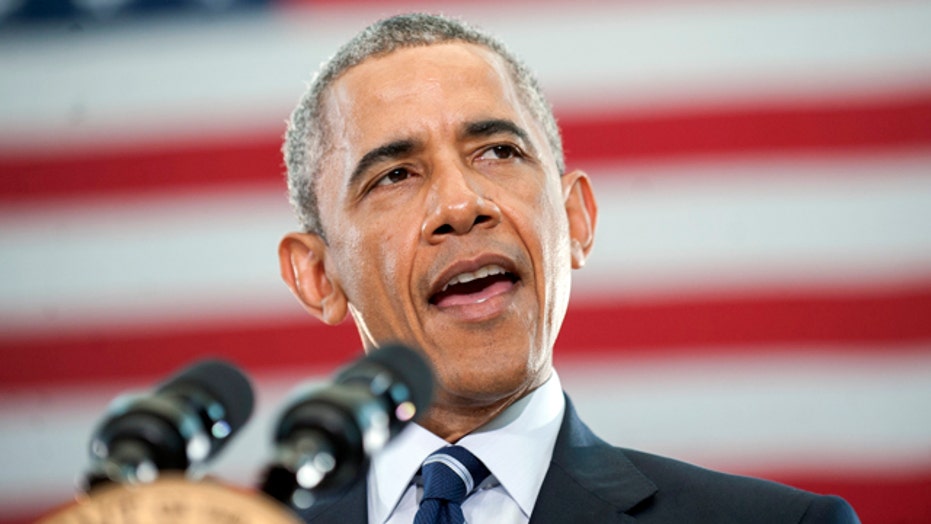 The Islamic State’s capture of the Iraqi city of Ramadi is sparking renewed criticism of Obama administration policies in the region -- from the decision to withdraw virtually all U.S. troops in 2011 to the current anti-ISIS strategy that relies mostly on airstrikes.

The fall Sunday of Ramadi, just 70 miles from Baghdad, marks the second time in roughly a year that the extremist group has taken control of a major Iraqi city -- after the United States spent nearly eight years at war in the country.

The administration repeatedly has defended its strategy for halting the Islamic State’s deadly advances in Iraq and Syria but acknowledged on Monday that the Ramadi takeover was indeed a major loss.

“No denying it is a setback,” said White House spokesman Eric Schultz, while reiterating the administration expected a long, hard battle and has no plans to change its strategy.

Gen. Martin Dempsey, chairman of the Joint Chiefs of Staff, later qualified the statement, saying Ramadi was a “serious setback for its long-suffering inhabitants” and Iraqi security forces.

But Republicans argued the "setback" stems from strategic errors. Sen. Lindsey Graham, R-S.C., said "everything" is the result of the "big mistake" of the U.S. not leaving 10,000 troops behind in Iraq after 2011. The Ramadi takeover, he told Fox News, is "Exhibit A of the failure of Obama's military strategy."

Arizona Republican Sen. John McCain, chairman of the Senate Armed Services Committee, told Fox News the Ramadi takeover and the overall U.S. foreign policy toward eliminating the Islamic State in Iraq and Syria is “one of the most disgraceful episodes in American history.”

“This is a failure of a policy, which I think is not enough of anything,” said McCain, who wants a combination of airstrikes and more U.S. military personnel in the region.

Earlier in the day, he told MSNBC that the incident was “another consequence of the failure of this administration and this president to leave behind a residual [military] force.”

McCain argued that Obama’s U.S. troop withdrawal in 2011 left a “vacuum,” including ill-prepared Iraq security forces that in abandoning Ramadi, the capital city of the Anbar Province, have allowed Islamic State fighters to help themselves to U.S. military equipment.

“We left behind I don't know how much equipment, capabilities, armaments, tanks even, Humvees,” McCain added. “So we'll have to start all over, I think, on training the Iraqi military.”

He also questioned the current military strategy that relies mostly on airstrikes. “We need more boots on the ground, not the 82nd Airborne,” he said.

A reported 500 Iraqi civilians and soldiers were killed in the Ramadi takeover, in addition to security forces abandoning armored vehicles and other equipment left behind by the U.S. military.

It's unclear how much U.S. military gear has been lost to ISIS in Ramadi and elsewhere. But the U.S. to date has given a massive amount of equipment to Iraqi security forces, including 250 MRAPs, 20,000 M-16 rifles and millions of rounds of ammunition.

Iraq's government and Iranian-backed Shiite militias are vowing to mount a counter-offensive to reclaim the city, raising the danger of frictions between the Shiites and the province’s dominant Sunni population.

Shiite militias, many of them backed by Iran, have been essential in defeating the Islamic State in recent battles. But they also have been accused of killing Sunnis as well as looting and torching Sunni property in the process.

Anbar is a mostly desert province but was a heartland of the Sunni insurgency against American troops following the 2003 U.S.-led invasion that toppled Saddam Hussein.

“I’m afraid you’d have bloodletting,” he told the network.

Nearly a year ago, Islamic State fighters captured Mosul, in a stunning defeat for Iraqi forces that helped the extremist group sweep across much of Iraq’s northern and western regions.

However, airstrikes by the U.S.-led coalition that started in August have helped Iraqi security forces and allied militias recapture some of the areas.

Col. Steve Warren, a Pentagon spokesman, said Monday that he didn’t think the security forces in Ramadi fled like they apparently did in Mosul.

“I think ‘cut and run’ is kind of a mischaracterization,” he said. “In this case it appears that ISIL forces simply had the upper hand.”

Warren expressed confidence about the retaking of Ramadi and attempted to downplay the situation, saying it was “one fight, one episode” in which the security forces were “not able to prevail.”

Still, his analysis followed a senior military official telling Fox News that a smaller ISIS force pushed out a much larger force from the Iraqi military.

Secretary of State John Kerry also said Monday that he was confident about defeating the Islamic State and about Ramadi being retaken “in coming days.”